This is a very simple conversion that you can use to mount a hunter killer missile on a rhino, razorback or predator without sacrificing the storm bolter . The easiest way to mount the hunter killer missile is on the same turret mount as the sbolter, and unless you buy extra components you would have to choose between the two on your model. There is a way of using both using only pieces from the standard kit but it ends up being quite fragile and would not be easy to magnetise.

This conversion uses parts from the standard rhino kit to allow you to mount both in a way that's suitable for use with magnets.  It doesn't look quite as smart as the turret mounted one, but it's quick and effective. 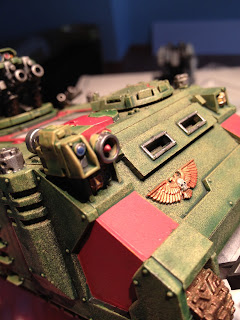 Start by clipping out the three parts of the missile launcher and cleaning them up. 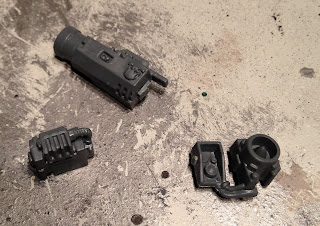 Next, separate the muzzle of the missile launcher from the front of the sensor housing with a scalpel. 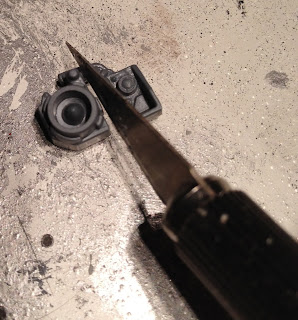 Clean up the part that you've cut and glue the missile launcher together. 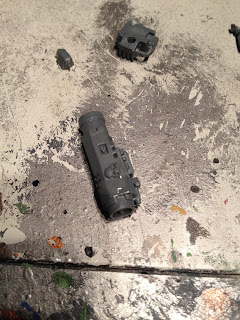 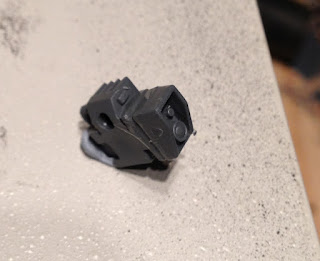 Glue the completed sensor to the missile launcher, making sure that the bottom of the two parts is nice and flush. Fill up the hole on the outside with green stuff and tidy it up. You may also want to file off the skull insignia - I think it looks a bit strange side on. 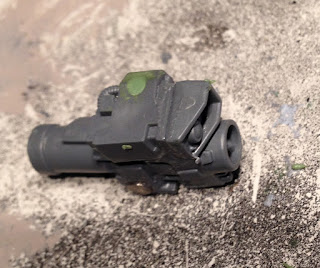 If you want to mount the launcher permanently, it's ready to glue on. If like me you're magnetising your tanks, flip it over and drop a magnet into the hole that's already there. Be careful to mark your magnet polarities. 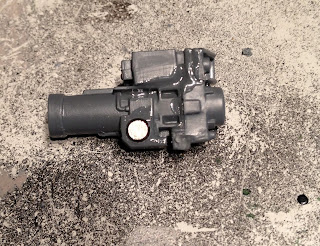 Now drill a hole in the tank to take the corresponding magnet. I find that it sits quite nicely above the head lamps, but there's any number places you could put it. 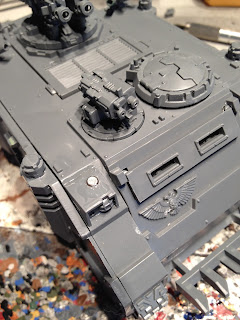 And here's the finished article... It goes onto the tank with a satisfying snap. The magnet is visible when the tank is painted but I don't find it too offensive. You could make it invisible if you sunk it in a bit deeper and do some careful greenstuff-ing. 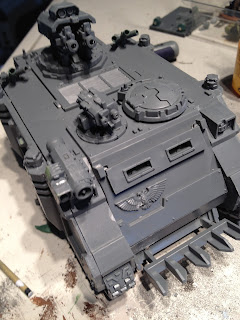 Whether or not HKs are worth the ten points is another question.. I'd probably go for a combi-weapon for the troops inside first with if I had the points spare. Anyway, if like me you want to be able to use all the possible options that the Rhino kit provides, this a good way of doing it.

Finally, a couple of observations on the picture I posted at the top, which shows my first go at this conversion. 1. After I took this picture I realised the sensor isn't painted properly! 2. This sensor has been glued the "default" way up for the kit, which means it looks a bit upside down when used in this conversion. I think new version picture above looks better.
Posted by Danny Kastigaunt at 05:57