I've called this a tutorial, but that's stretching it a bit seeing as we really didn't know what we were doing when we started this project! Anyway, this is how we went about flocking our table, and hopefully people will learn from the things that we did wrong as much as the things we did right. 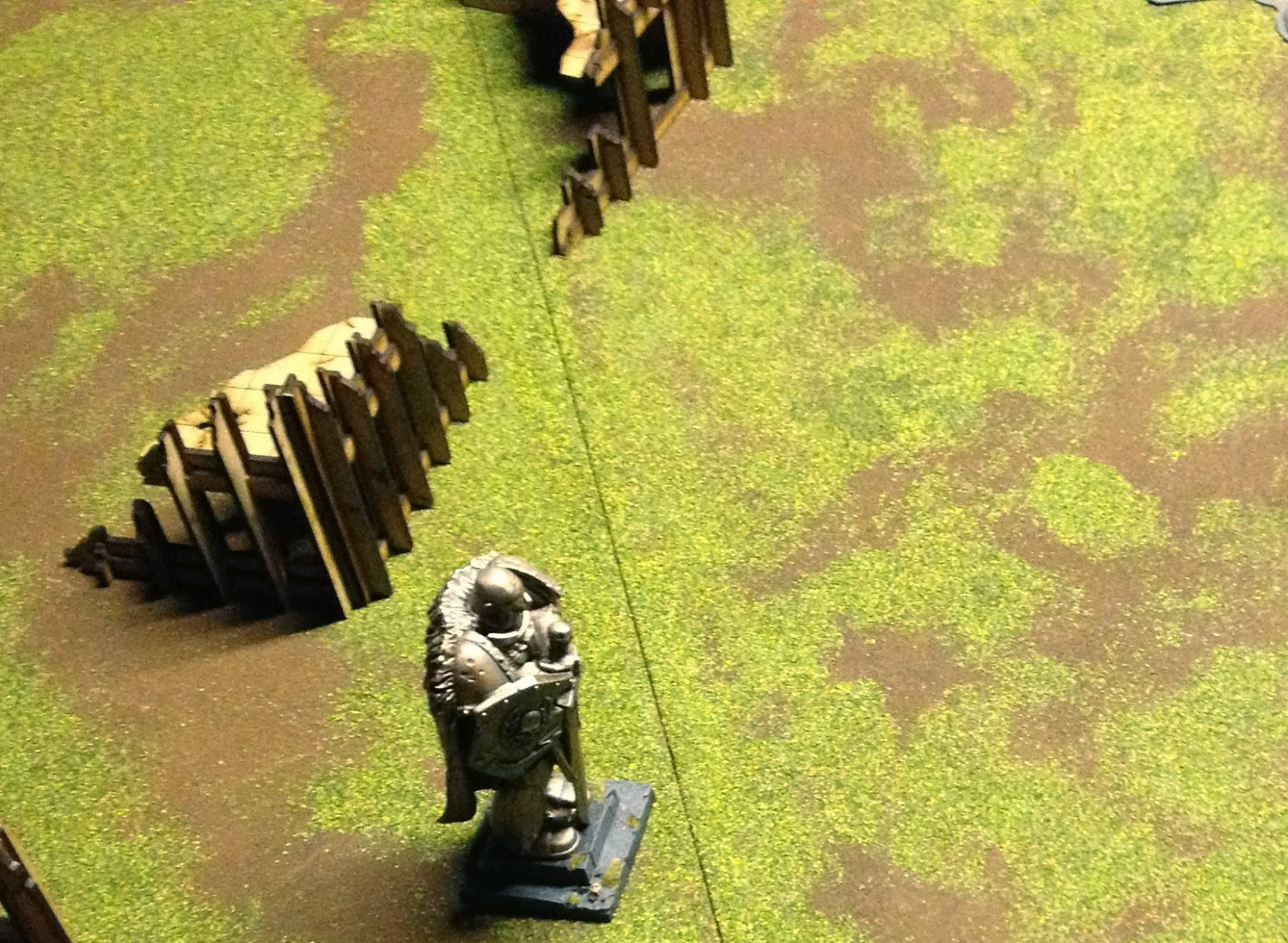 We were loosely following this recipe which was posted on Warseer by Feren from Edinburgh League of Gamers: http://www.warseer.com/forums/showthread.php?232043-Making-a-40k-Table-Finally 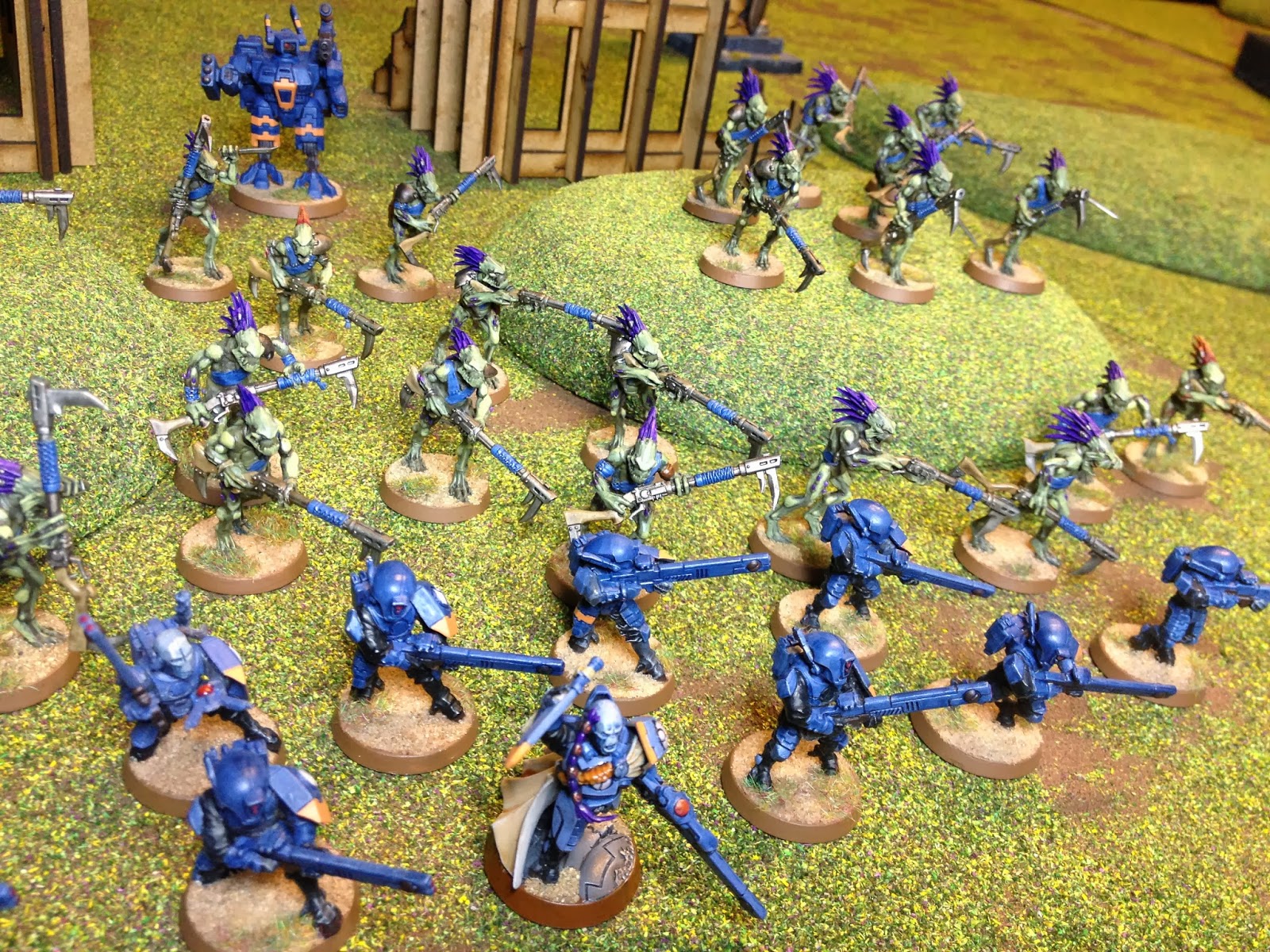 Our aim was to do the table in a way that would complement these excellent hills which we got from the wargamestournaments eBay store. They put our unpainted table to shame so we set out to flock it in similar way. 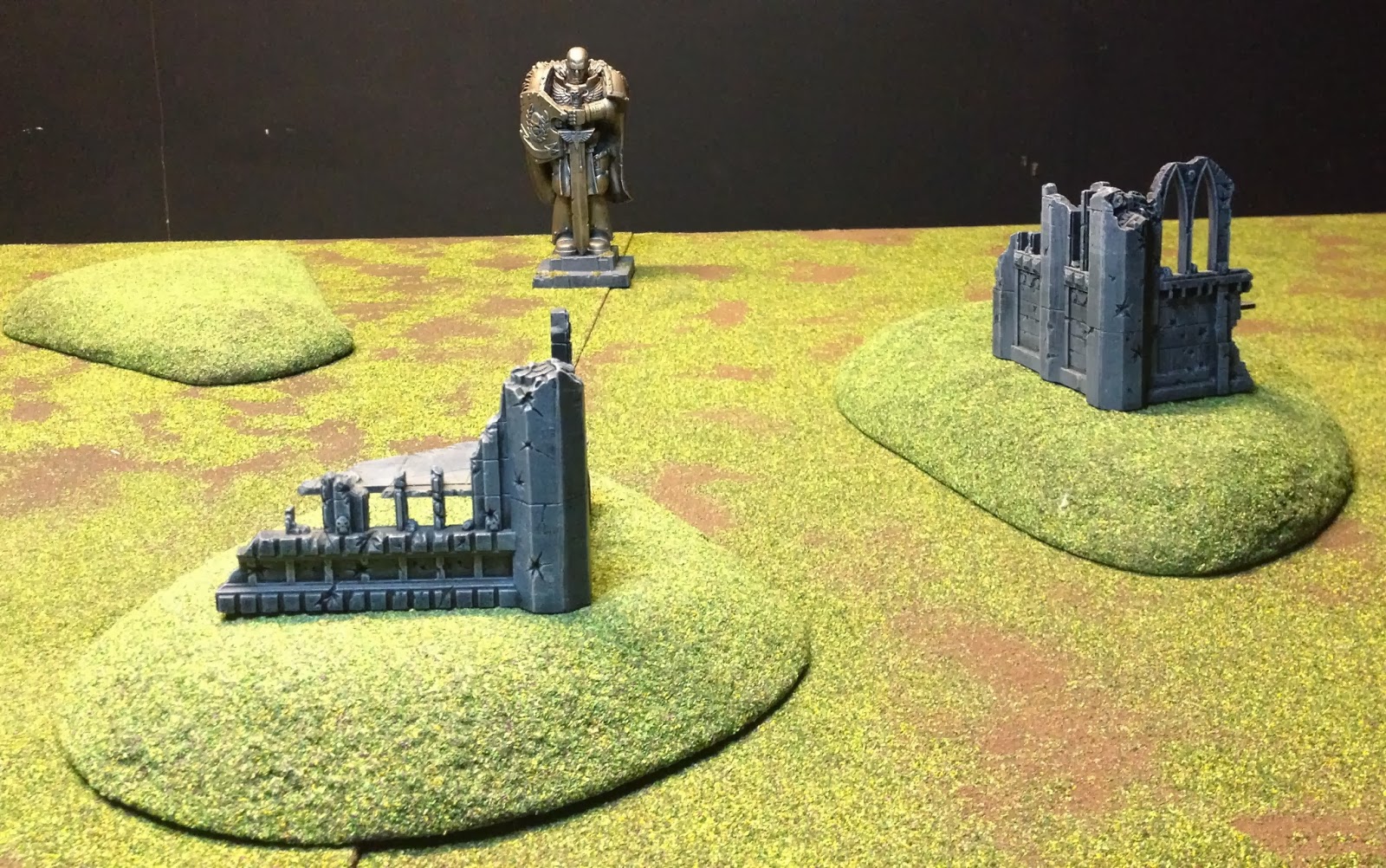 The Table
We have an 8' by 4' table in the Wargarage which until now has been unpainted. It was high time that it had some colour and texture applied to it, but we decided against flocking the table itself and instead got four 2' by 4' sheets of MDF to lay on top. The texture would be applied to these boards. 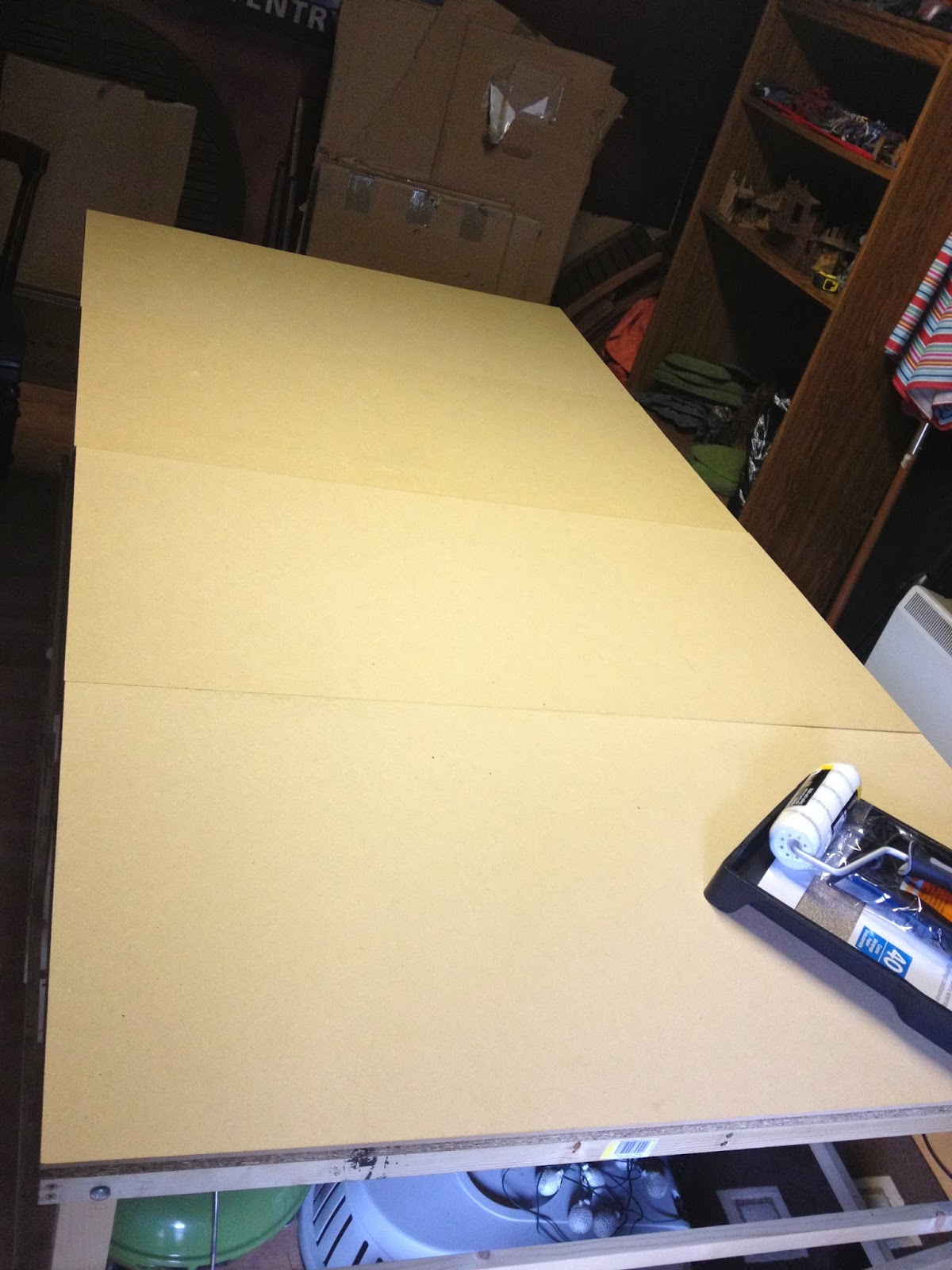 Preparing the Boards
Before any flock went on the board, we wanted to add some texture and colour using sand and paint. The first step was to take the smooth surface off the MDF by giving one side of each board a quick going over with some sandpaper. When this step is done there should be a nice fluffy feel to it. 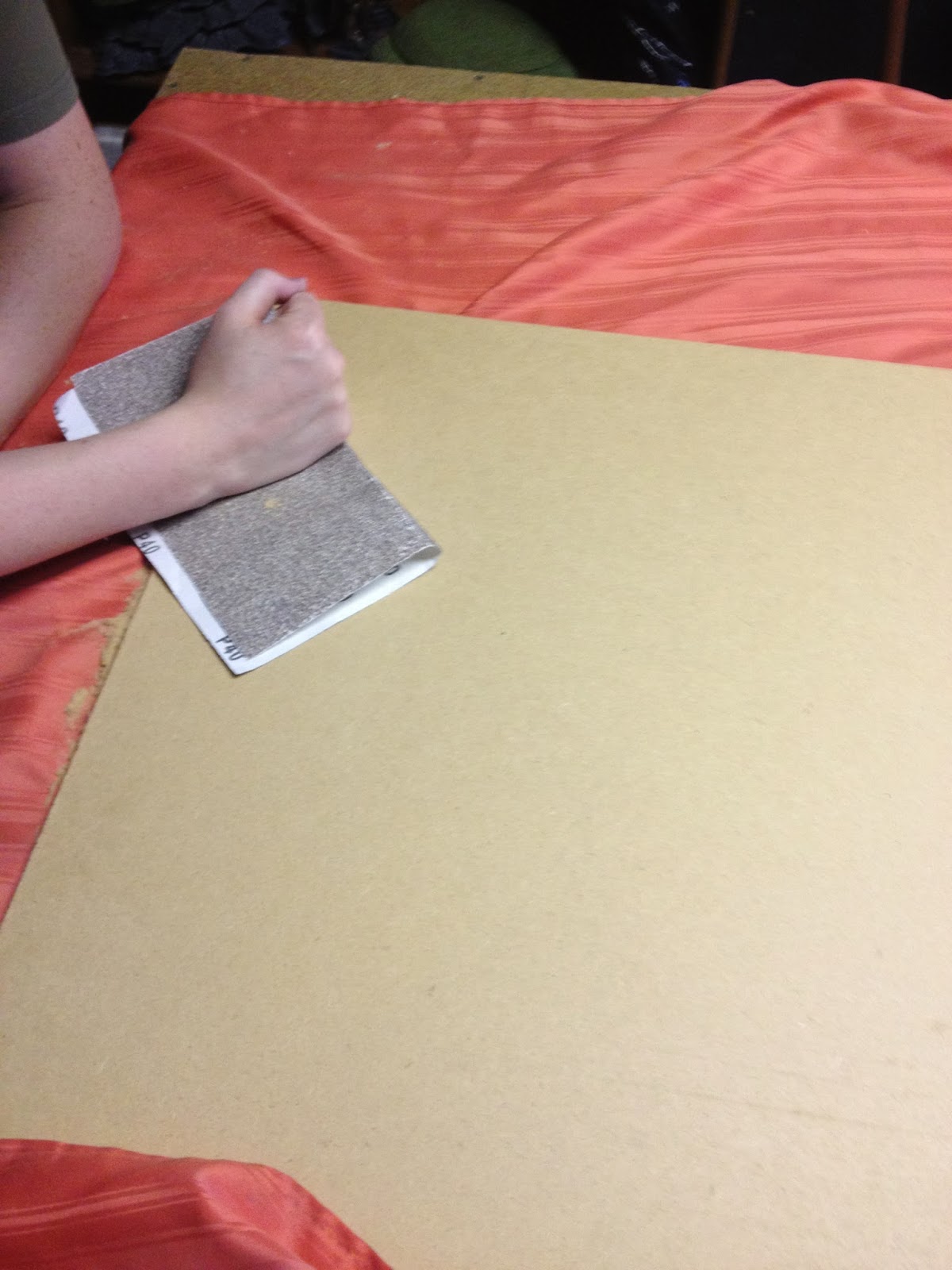 While we were doing this, we were baking the sand to make sure that it was nice and dry. We used builders sand that had been lying around outside for months, and found that the best way to dry it out was in disposable turkey baking trays at about 150 Celsius. About half an inch of sand in a tray would be dry in 15-20 minutes. For our 8' by 4' table, three trays of sand would have been plenty if we were being efficient, but in the end we prepared a fourth tray just to be safe. 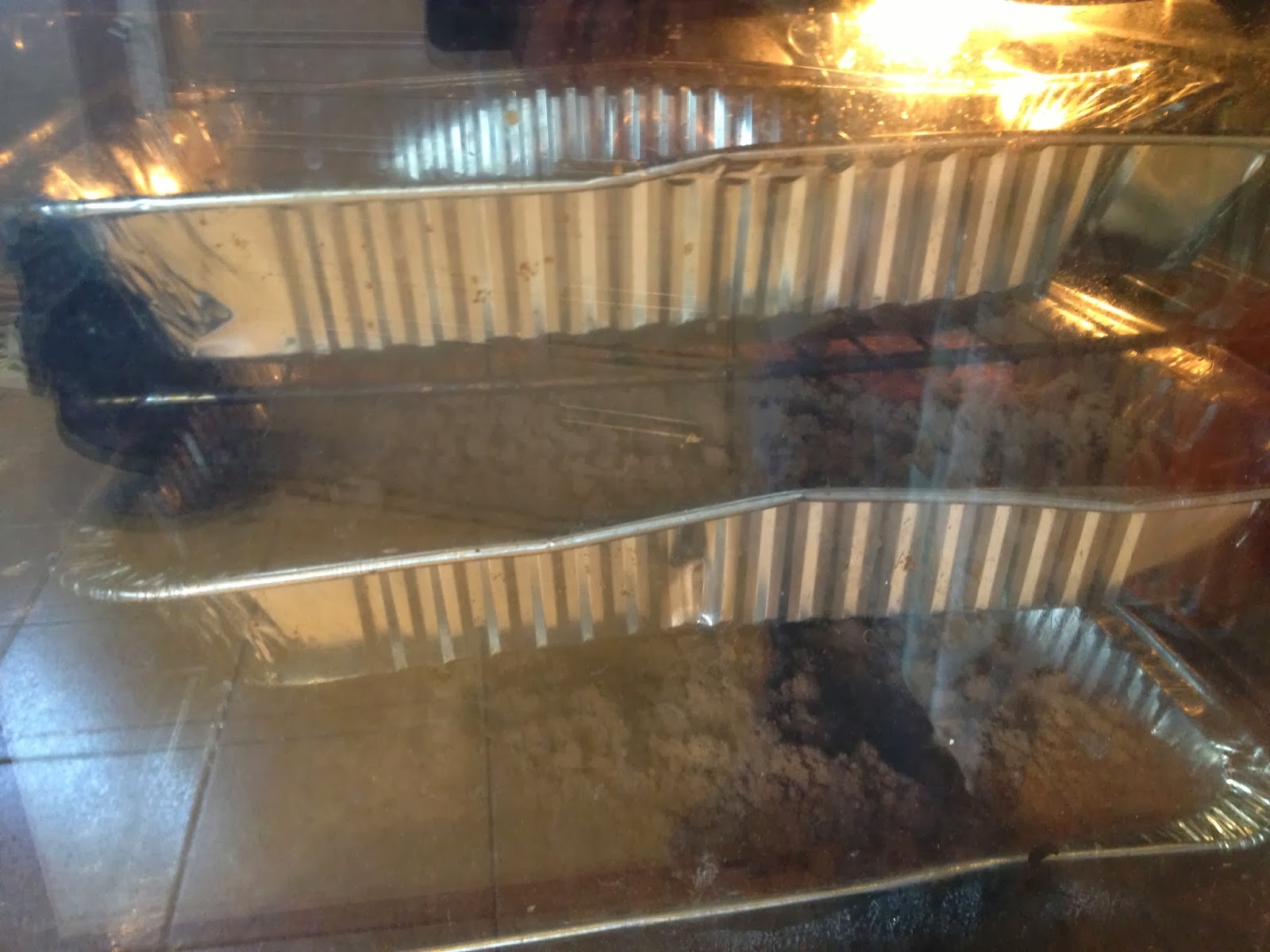 Once we'd finished drying sand out it was time to apply it to the boards. We used a roller to apply PVA and water mixed at approximately 2:1 to the fluffy side of each board. Afterwards sand was liberally chucked on before being patted down and spread around by hand. 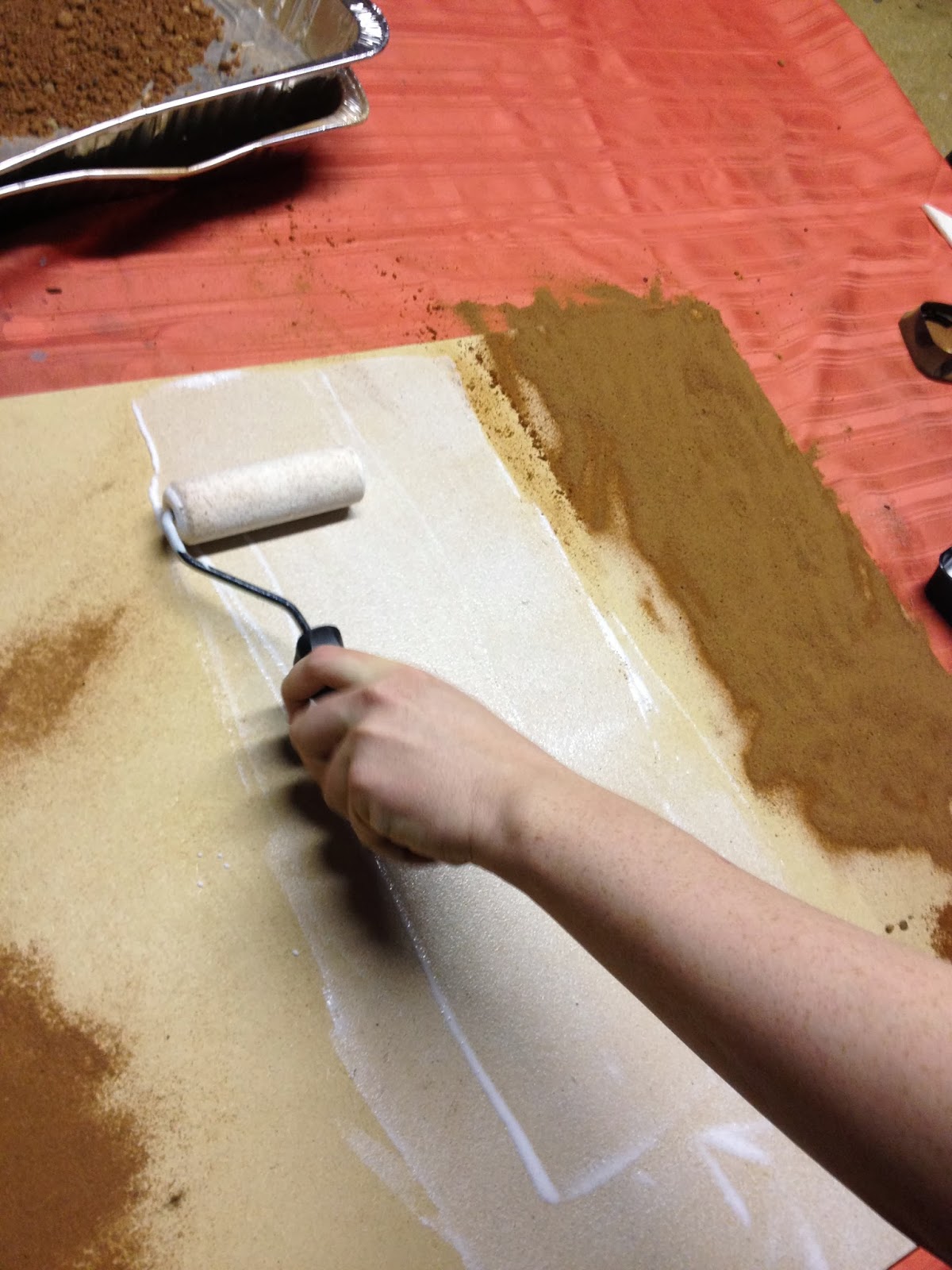 After some drying time we tipped the excess sand into our dust sheet and went off to play the X-Wing miniatures game for a couple of hours to let the whole thing dry out enough to be painted. Leaving them overnight to dry would probably be the best option if time allows. There were a few wet patches and areas where the paint rollers picked up sand on our boards, but we managed to patch these up well enough. 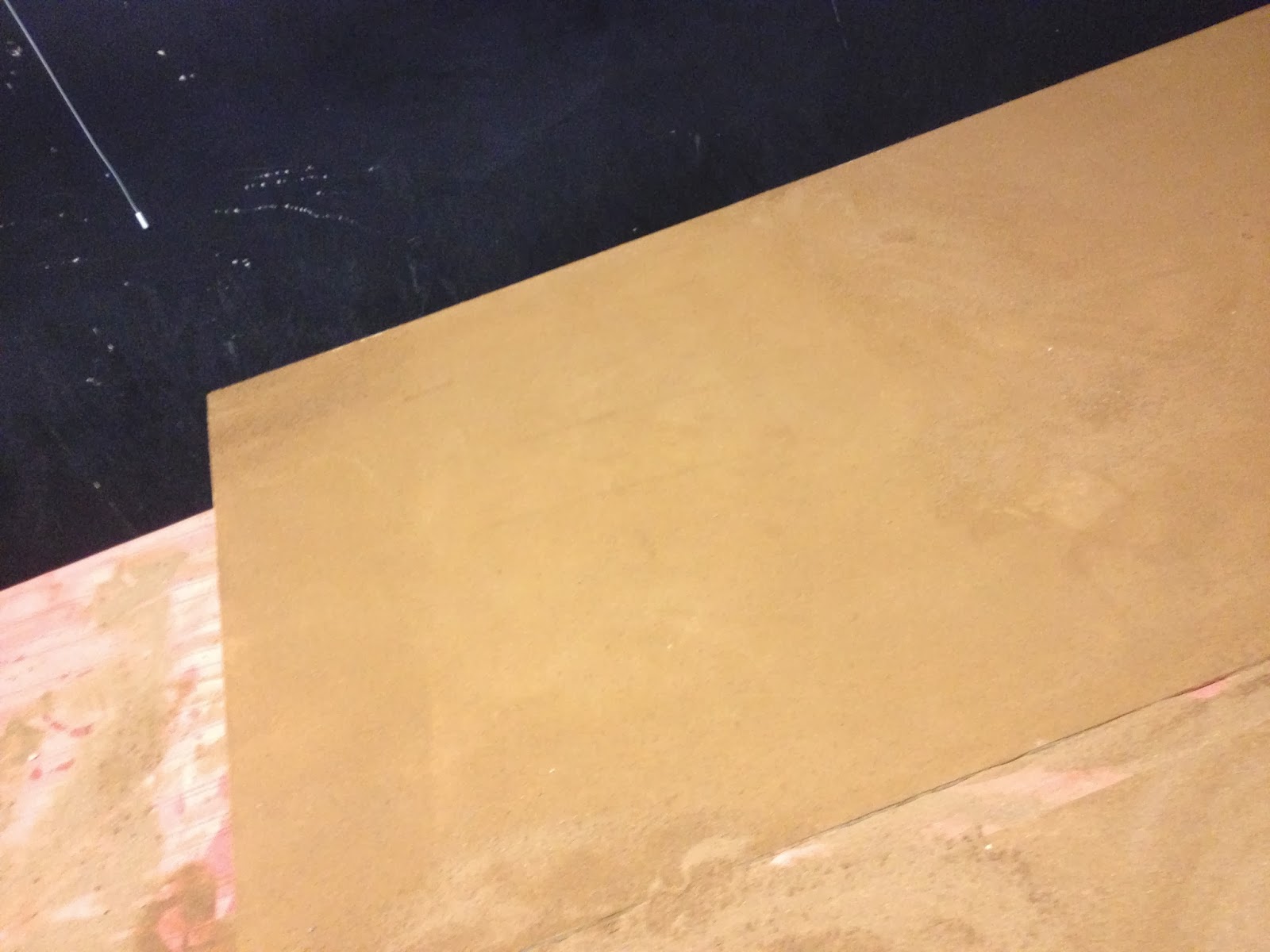 We had decided on a dark brown colour similar to Rhinox Hide in the GW range for the base. Because this was cut with water and PVA, a single 200ml tube of acrylic was plenty for the entire table. The one that we used wasn't particularly cheap, but it would probably be possible to shop around and get something equally good for these purposes without spending as much as we did. 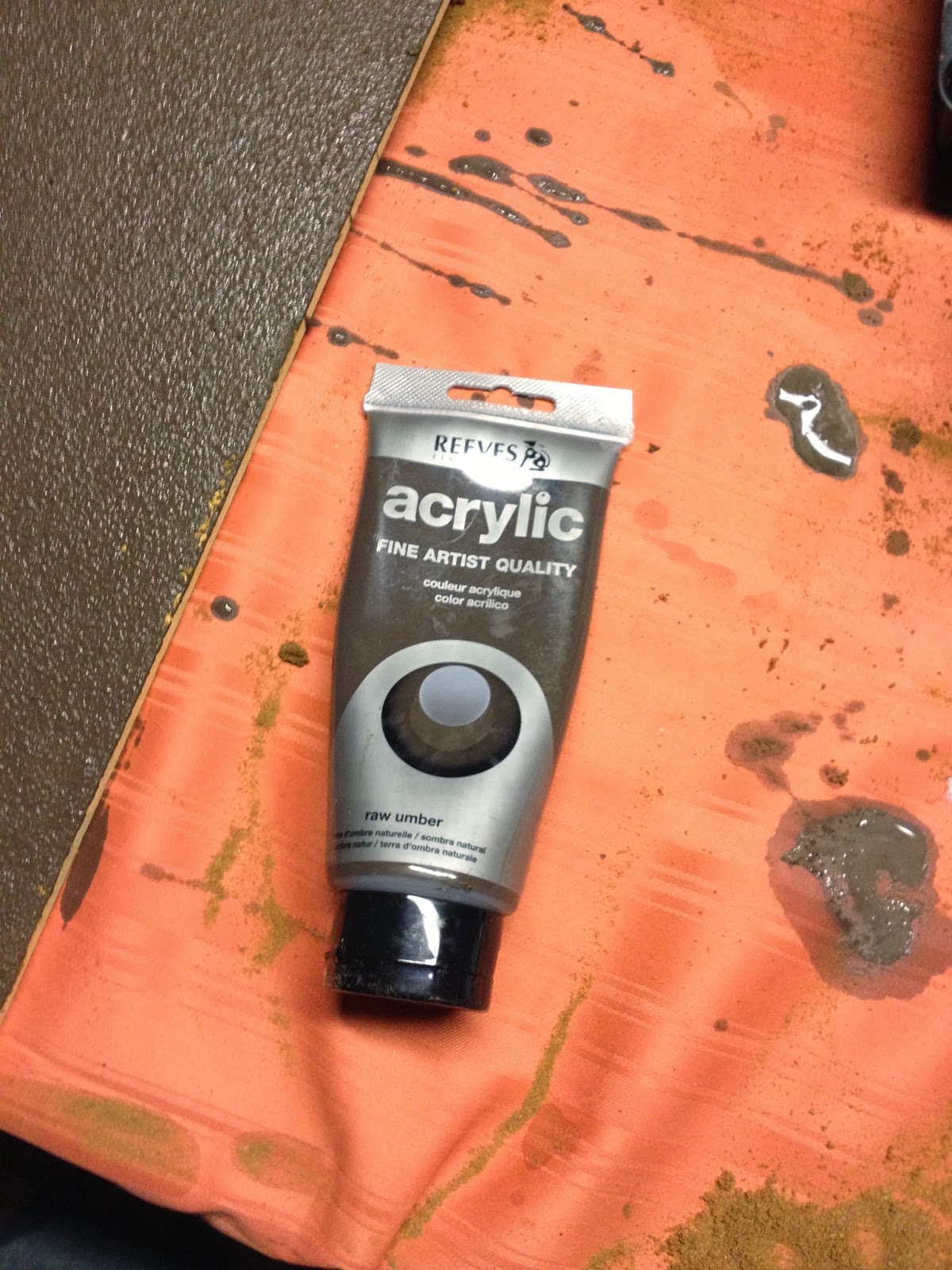 The paint went on with the roller, and we found that a pva:water:paint ratio of approximately 5:3:1 worked about right. In a perfect world, the sand would be totally even and there would be no bare patches at all. On our boards, there were some areas with less sand or no sand at all which we just touched up with paint. We decided that there were so many layers of flock going on later that these wouldn't affect the final finish at all really. 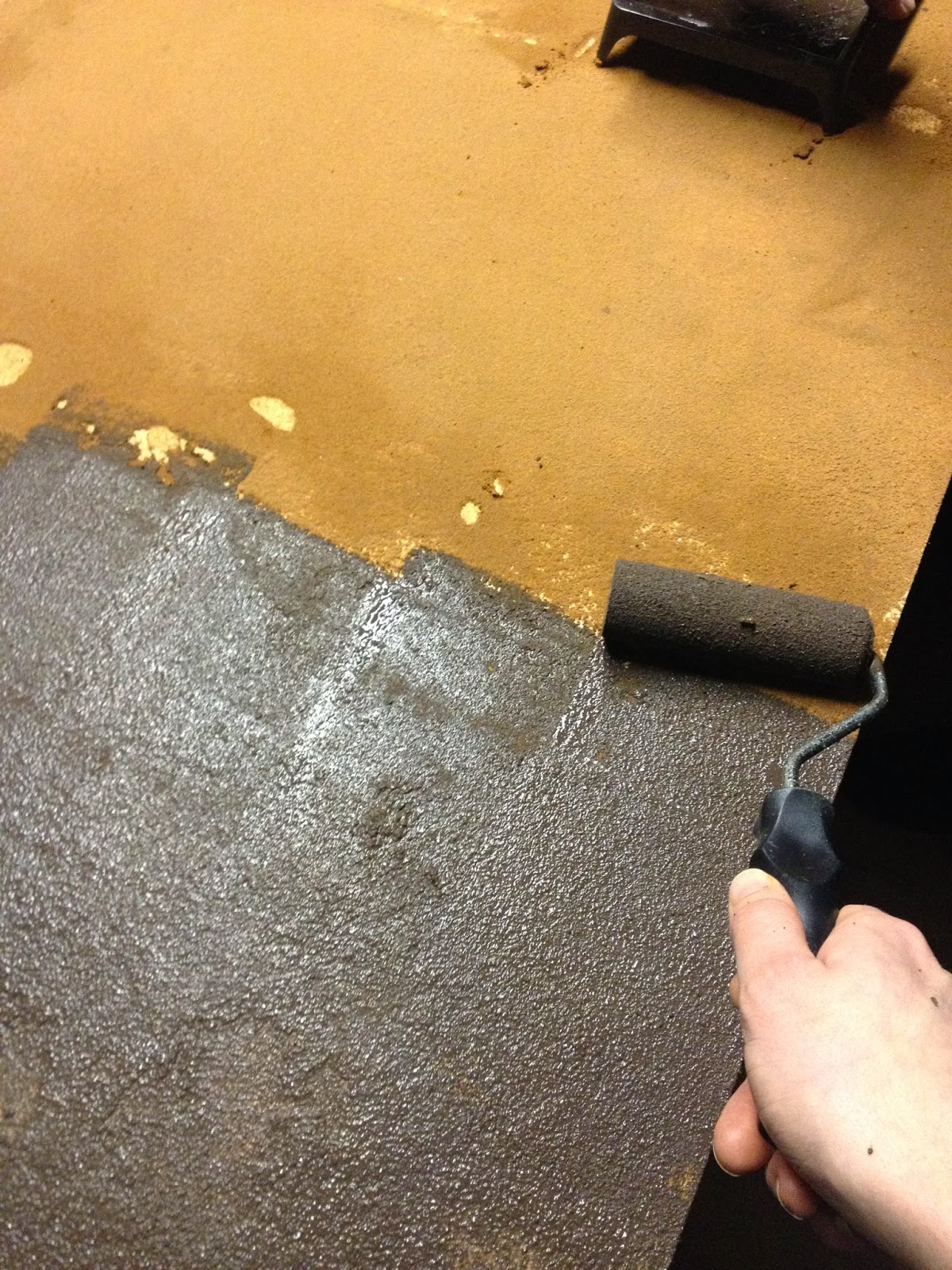 Once this coat dry, the final preparation step was to drybrush each board with a lightened version of the base colour, just to highlight some of the sand texture. 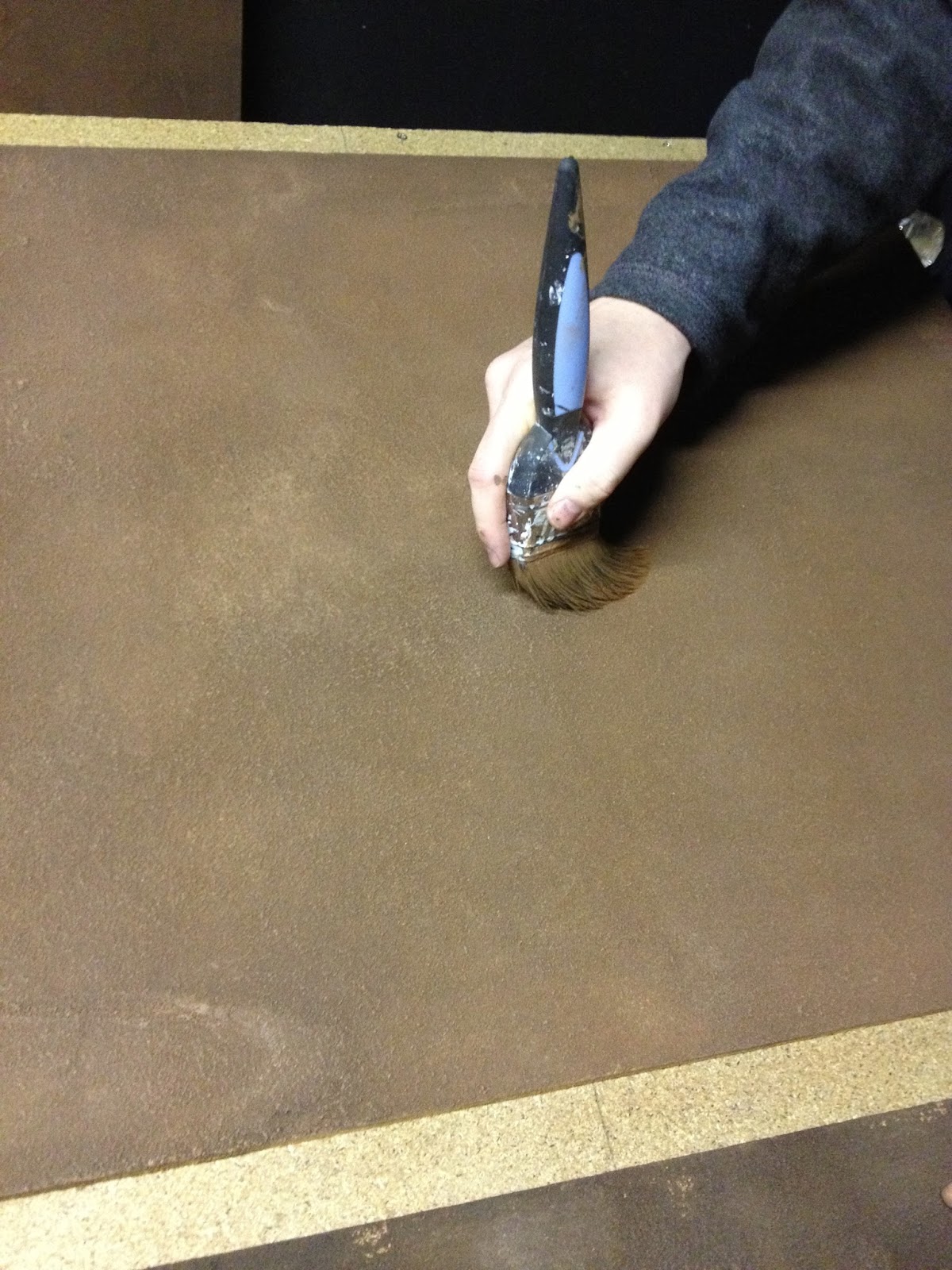 Once this is done, the preparation stage in complete, and it is time to start mixing some flock.

The Flock
After doing some research we came up with the following flock mixture to use as the basis for the table. All of these are manufactured by Javis Countryside Scenics:


Each bag was shoved into a biscuit tin and given a good mix. This is a particularly satisfying job! 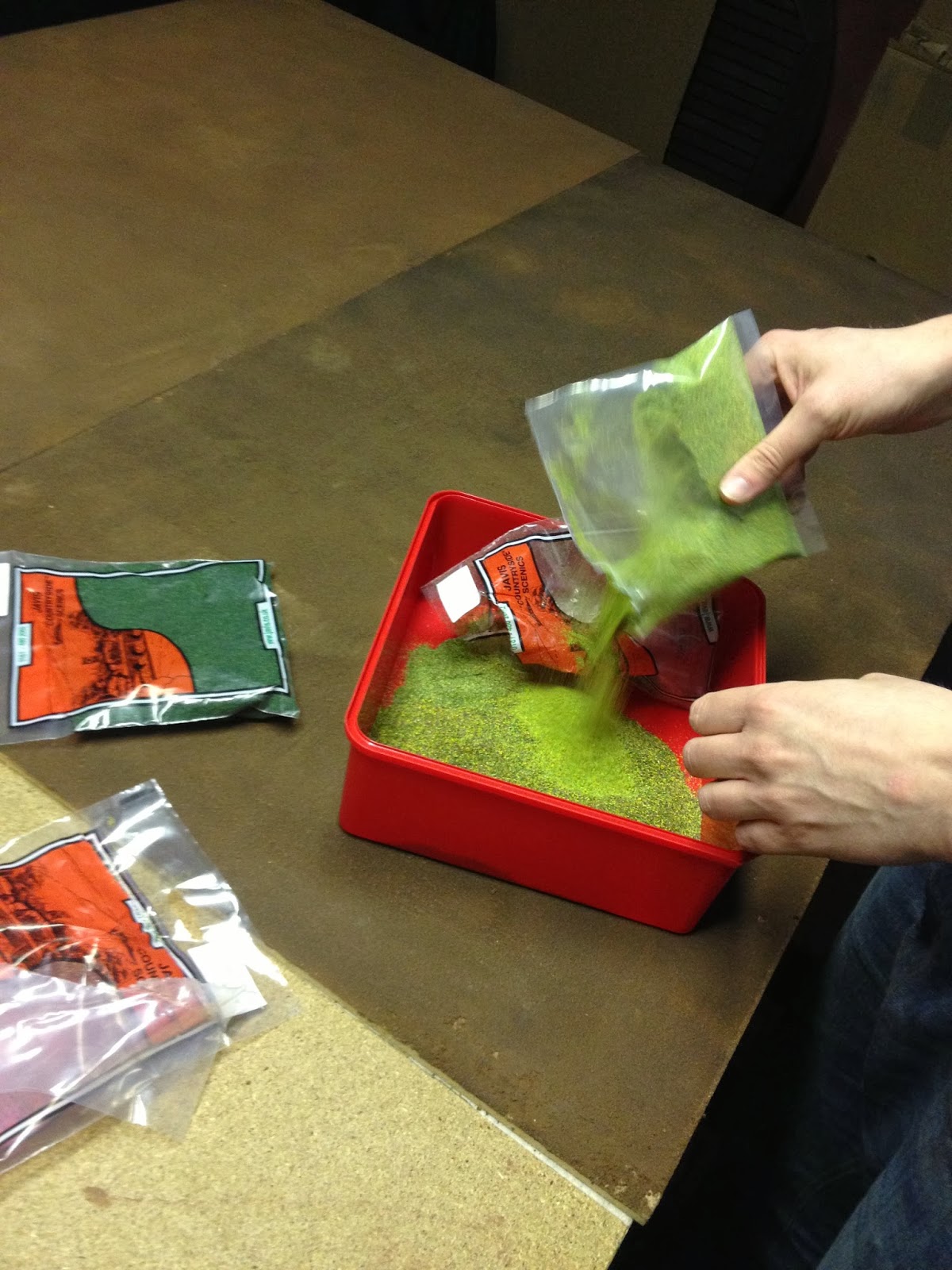 Rather than having a uniform layer of flock on  the board, we wanted to leave some areas of the textured board showing at this stage. To do this we painted pure PVA on in patches then drybrushed it outwards so that further away from the centre of these patches, less and less flock would stick, creating a natural looking gradient. 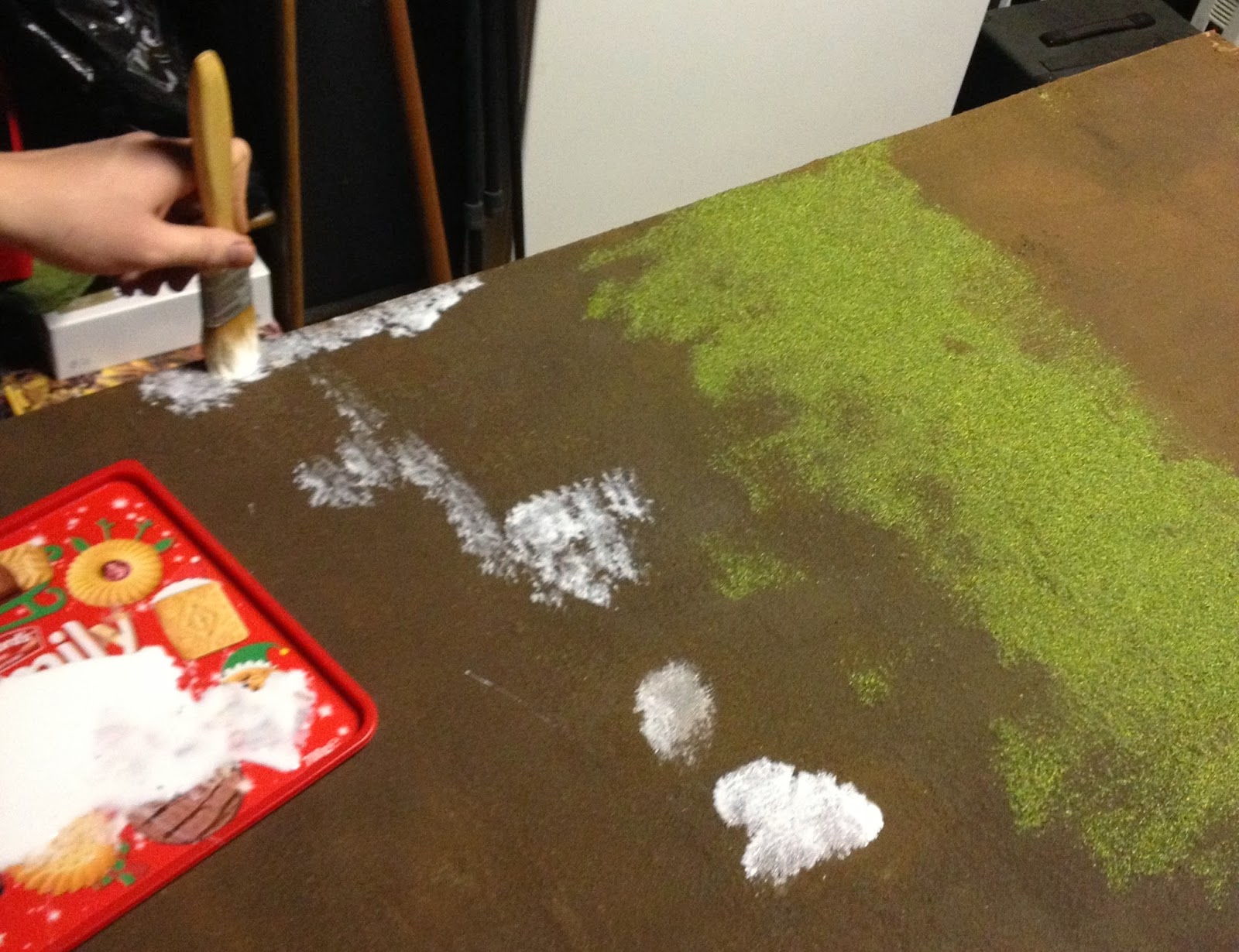 We found that this was also a really good opportunity to cover up any mistakes that have been made in the preparation of the board. Any patchy areas can be given the most PVA and be completely covered with flock to hide all the mistakes! 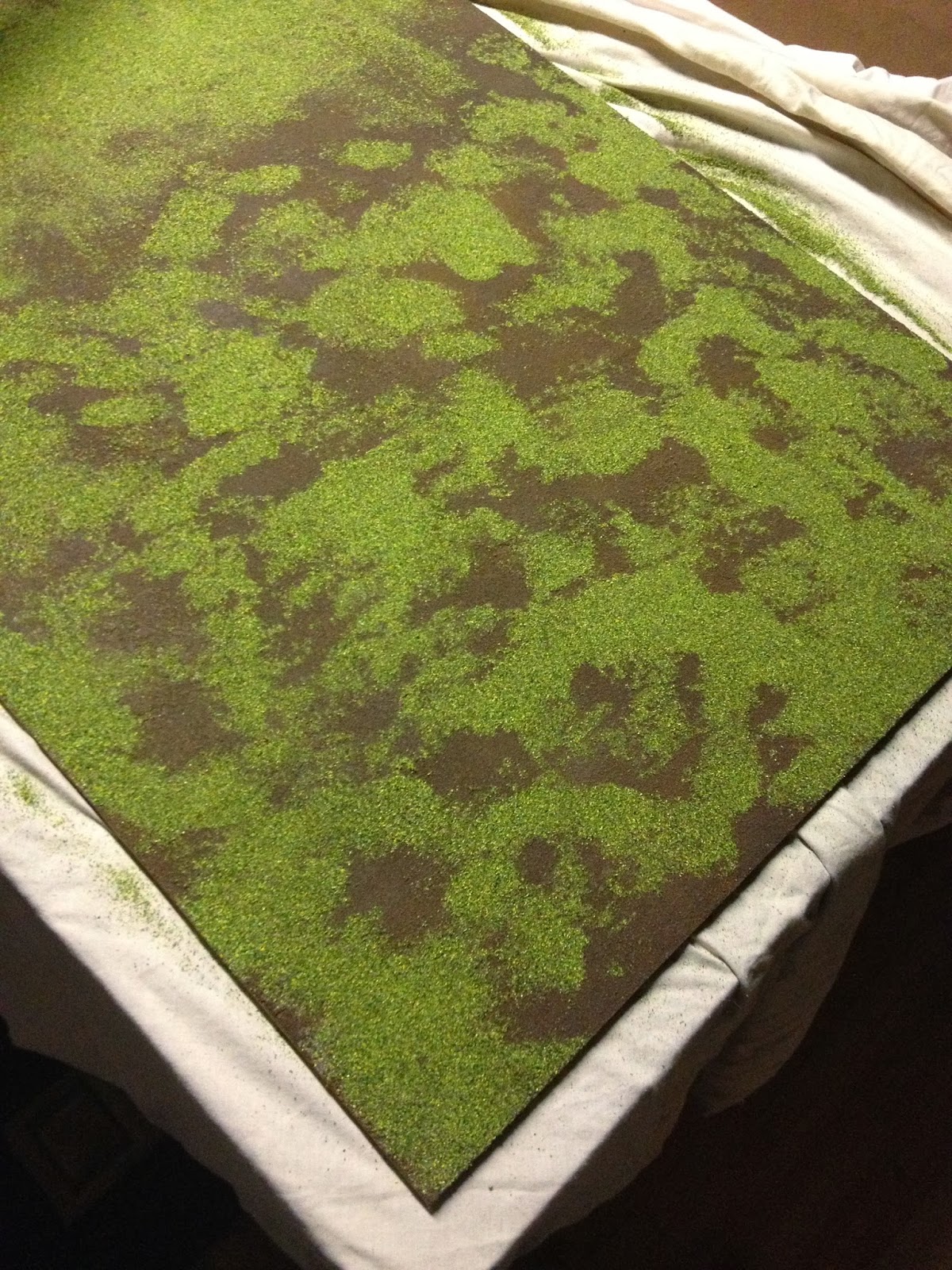 At this stage, all of our boards had flock patterns that came out a bit different, but that didn't matter too much because the next job is to lay the boards out next to each other and to add flock to give the whole table a coherent look. The edges of the boards need particular attention. 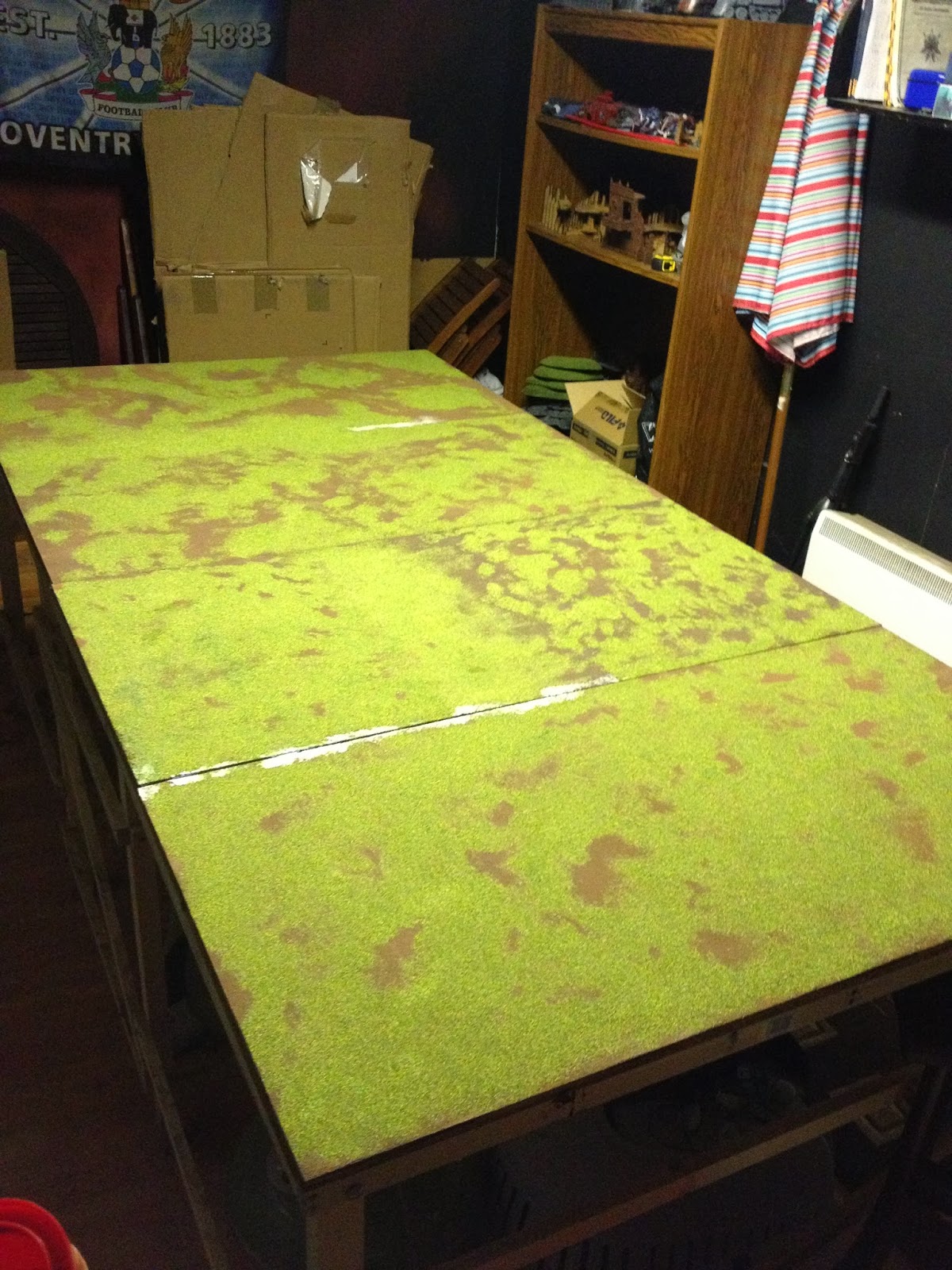 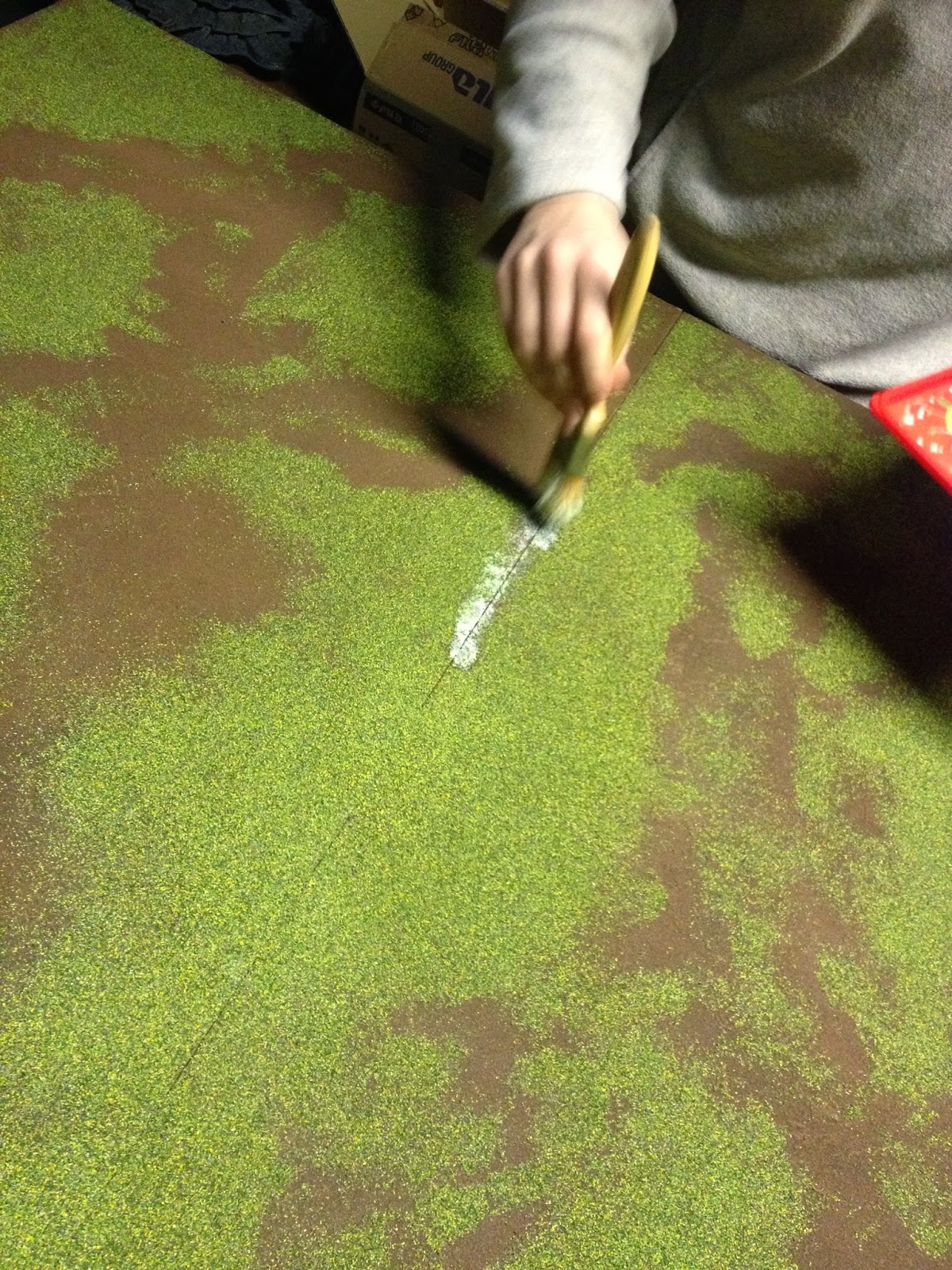 This part was really good fun but we did make a bit of a mess of our brush. Luckily we'd been pretty sensible and used the cheapest, nastiest brush that we could find. 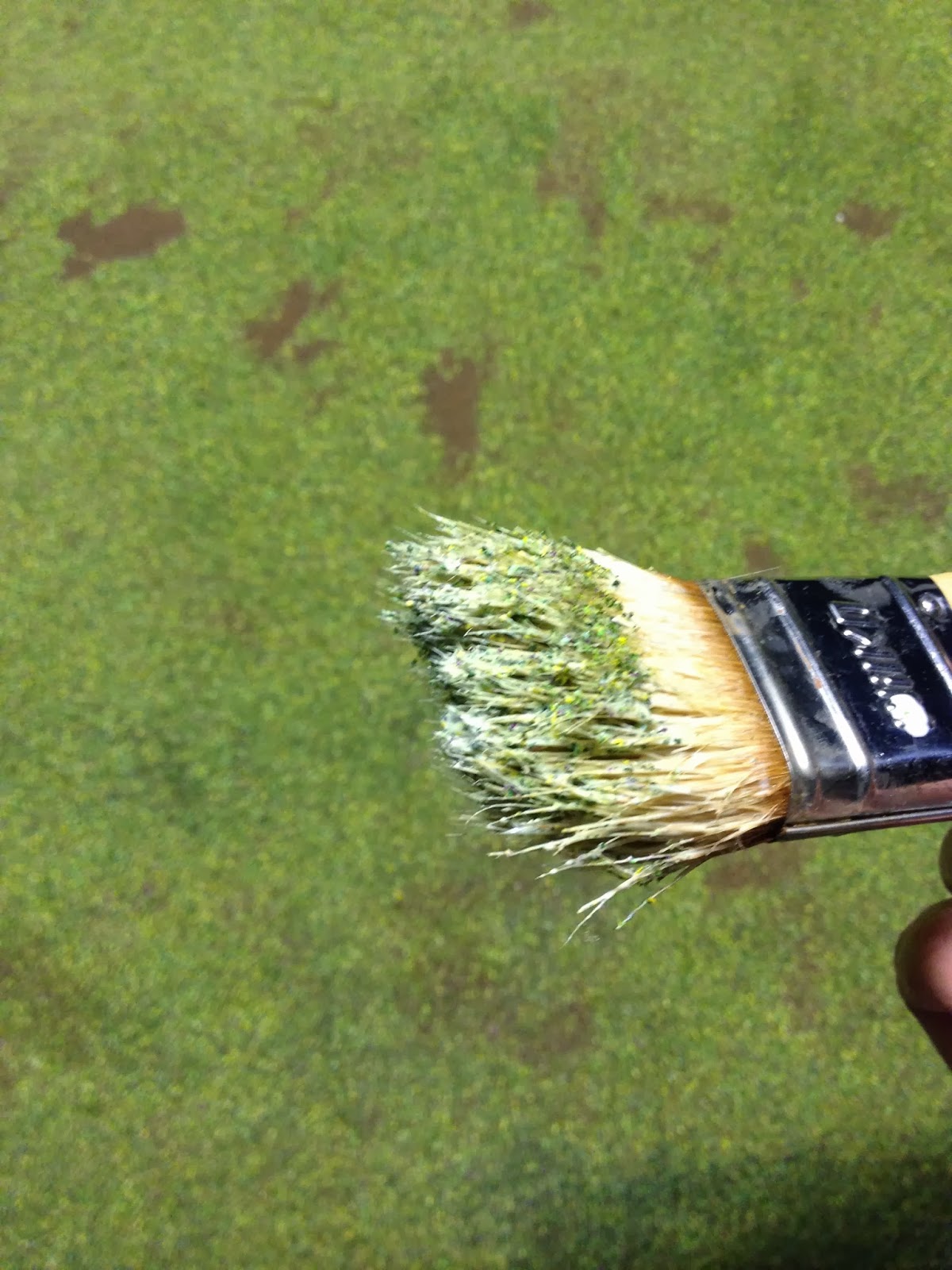 Now the the final look of the table is starting to take shape. One possible improvement could be at the edges of each board. We've used flock to make one board bend into another, which means that there are fairly regular bands across the table. With a little bit more planning, this could be improved, but it will not be a problem when the table has terrain on it. 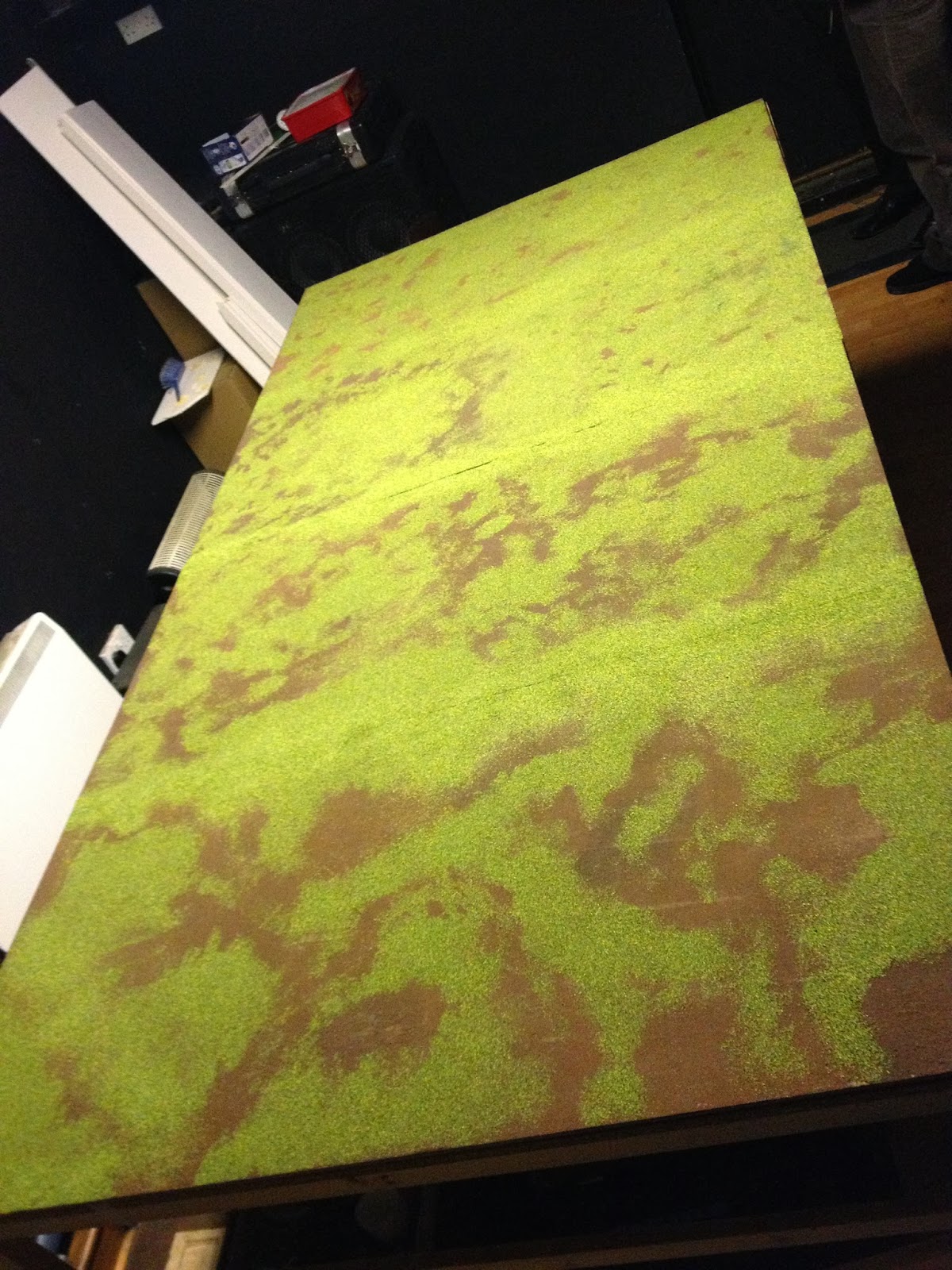 All that was left to do now was seal the board with some more PVA, this time watered down and sprayed through a handheld spray gun. The one we used was similar to the ones you get kitchen cleaning sprays in, but a bit more heavy duty to cope with the thickness of the mixture. We ended up using a water:pva ratio of approximately 4:1. 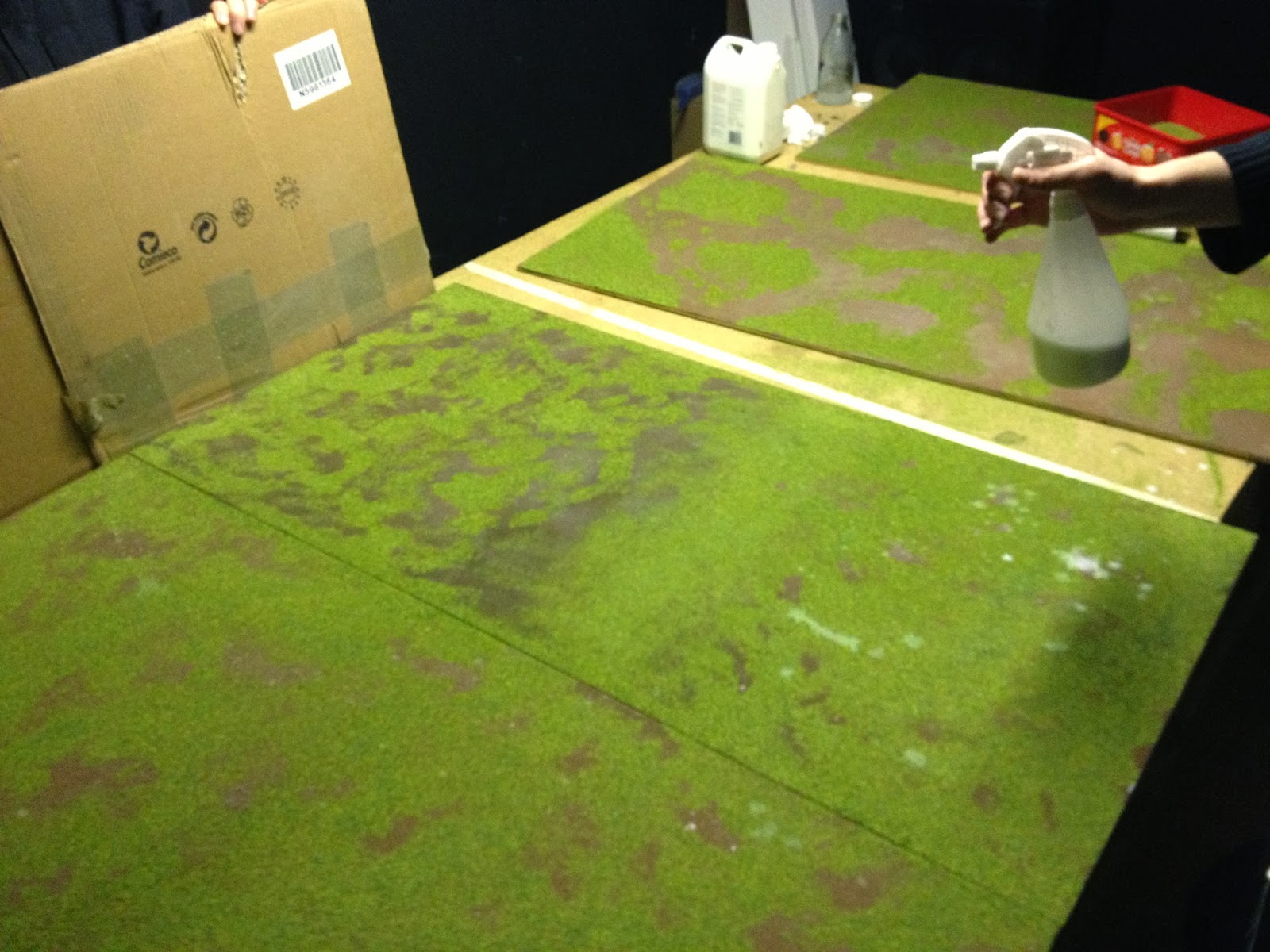 We found that the mixture tends to drip out of the spray mechanism quite a bit. You can see this on the board in the right hand side of the picture above. It is worth using something to catch the drips so that patches of flock don't get ruined. 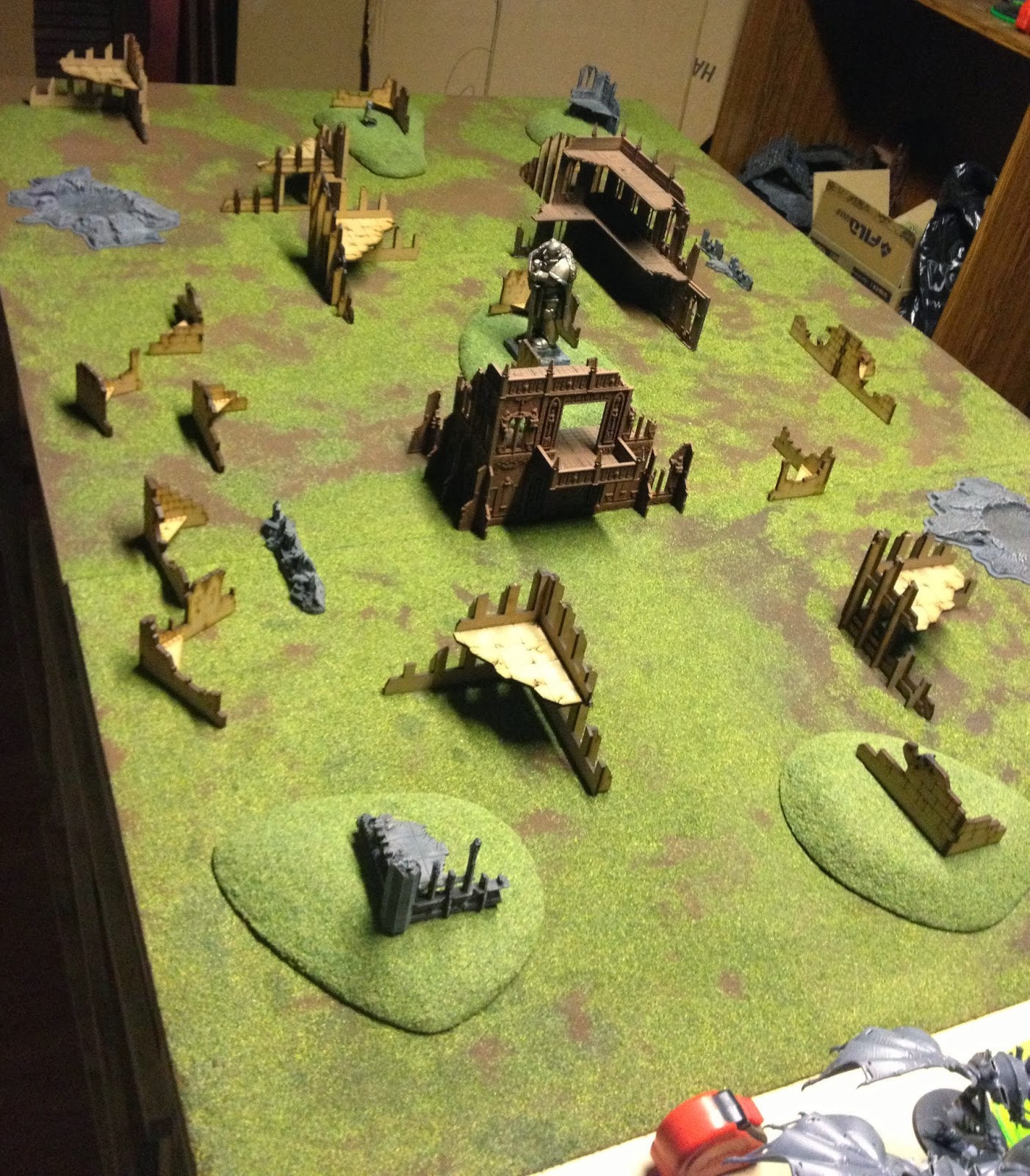 This was a good few hours work but certainly worth doing. Having a properly presented table is going to make our games look much better, and will hopefully encourage people to field fully painted armies a bit more often! 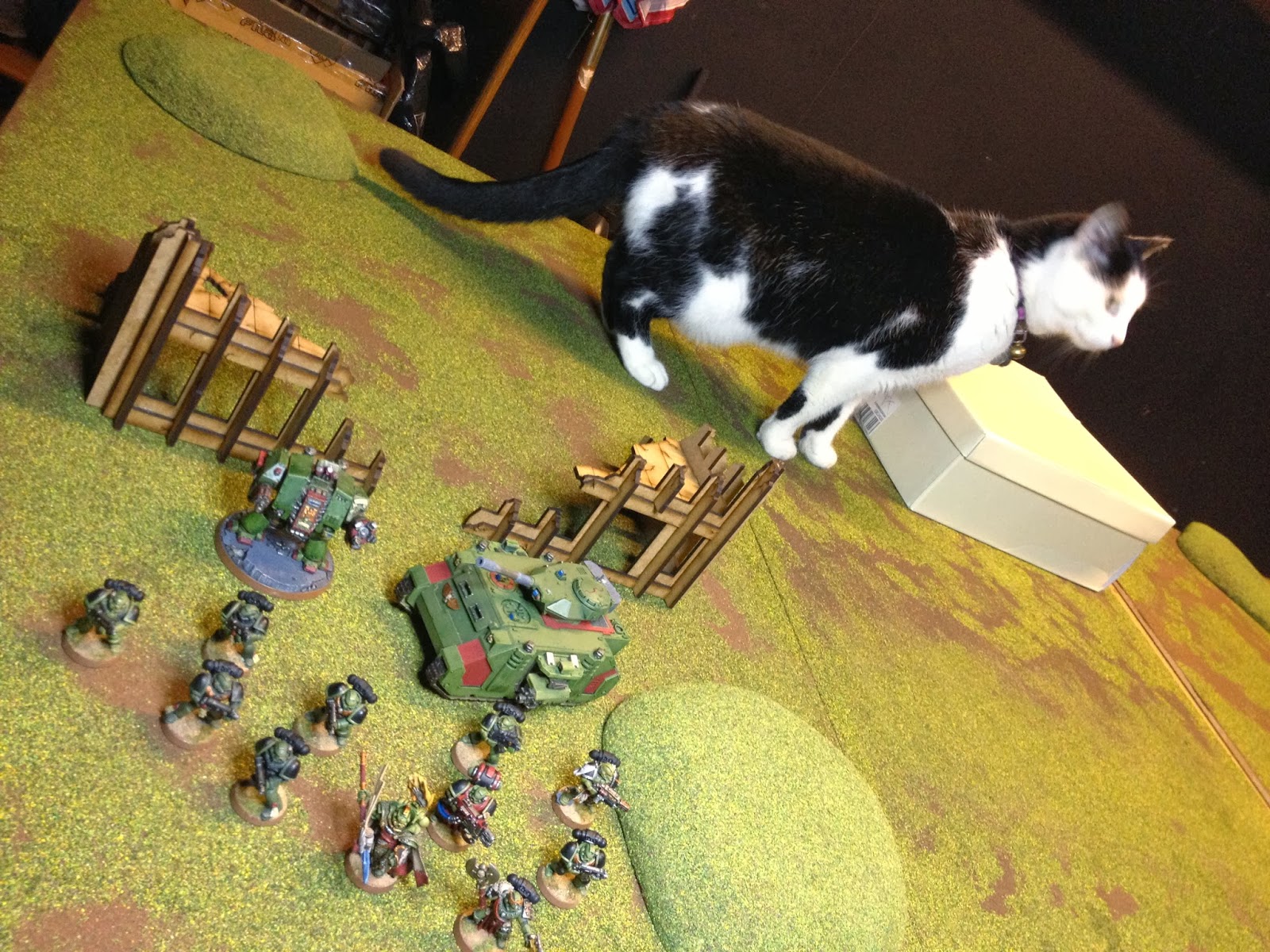 Unusually, it was Warhammer Fantasy Battle Cat who came to help me take the pictures today. The Wargarage is in her garden and she often comes in to see what's going on when I am in there on my own, but tends to steer clear if there are more people waving rule books around and shouting etc.
Posted by Danny Kastigaunt at 14:00

Email ThisBlogThis!Share to TwitterShare to FacebookShare to Pinterest
Labels: tutorials