During a recent eBay trawl I came across a couple of metal Dark Angels veterans untouched in their blister pack. I am complete sucker for metal models in their original packaging because it reminds me of the good old days. I bought first, and asked questions later... In the end, I decided that these would make excellent additions to my Salamanders army with the right paint job. Here is the first one that I have finished: 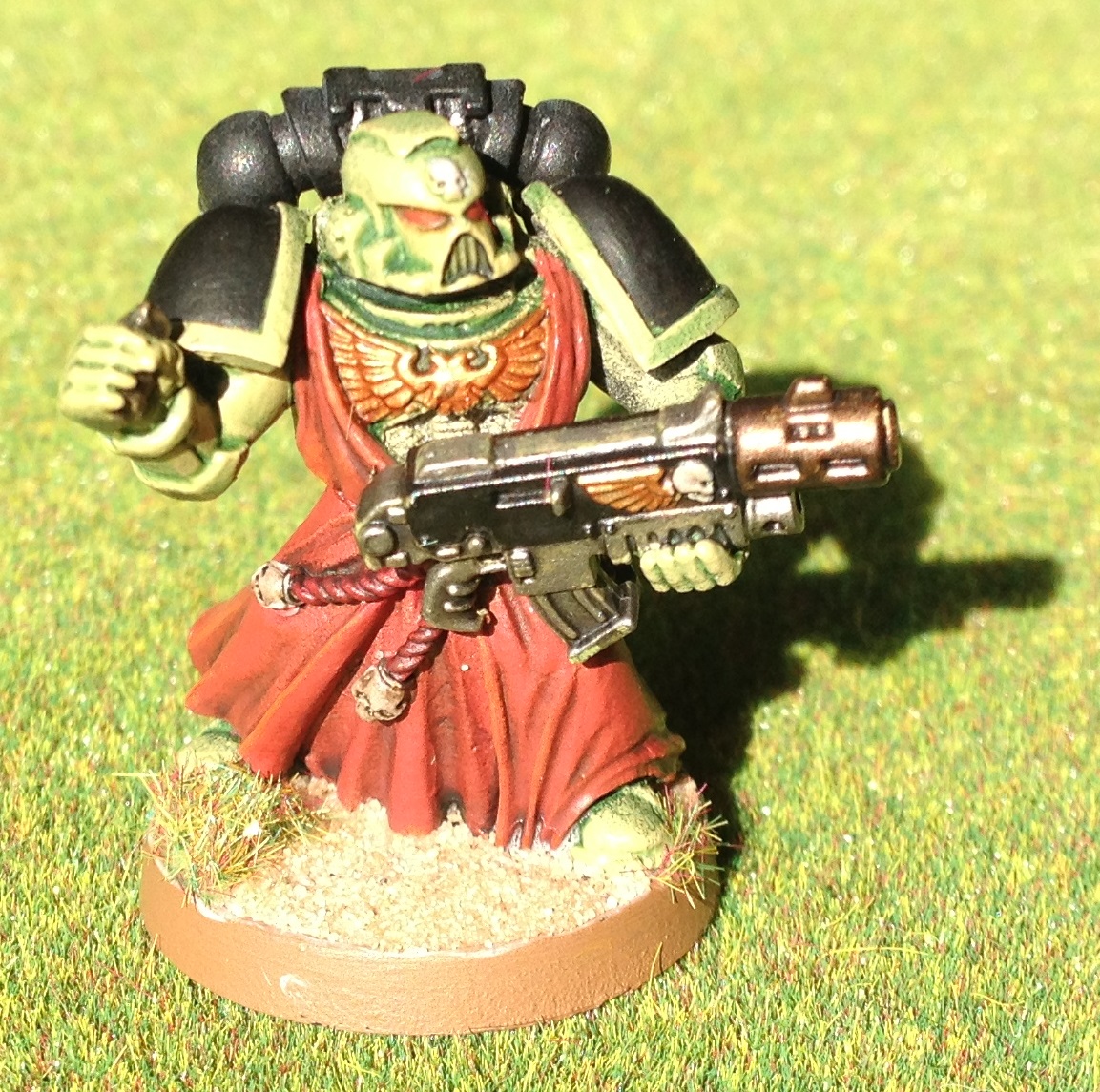 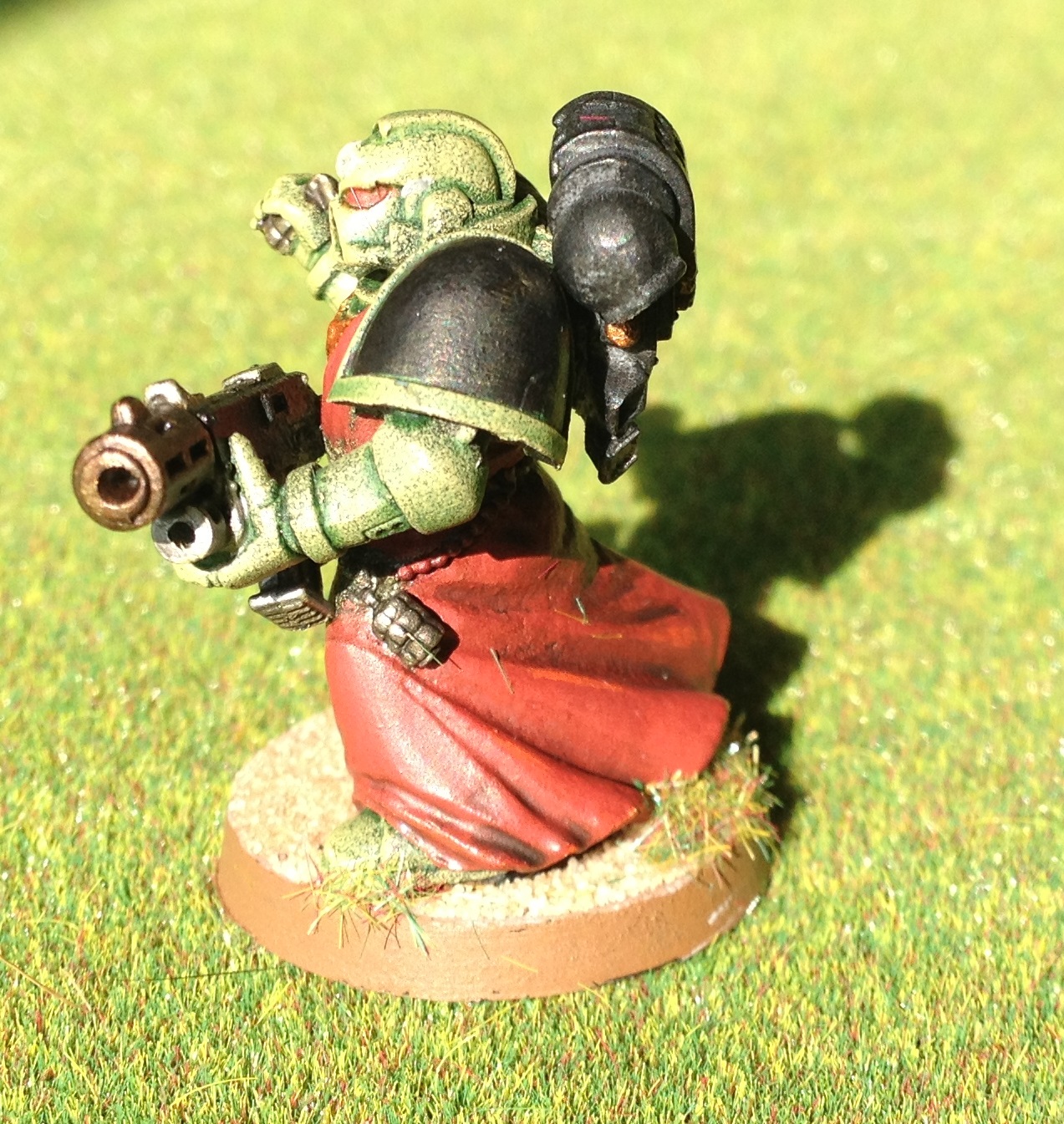 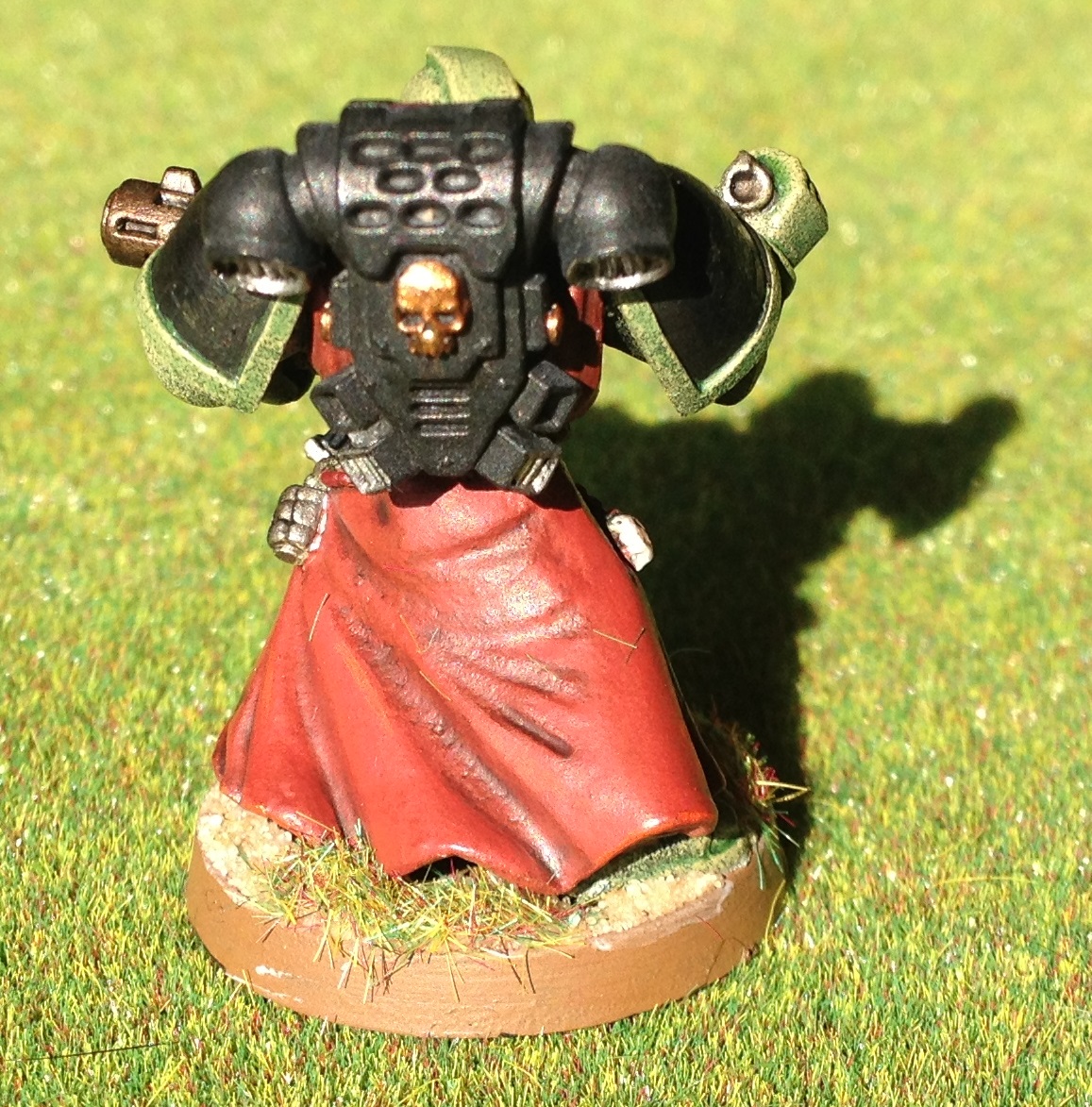 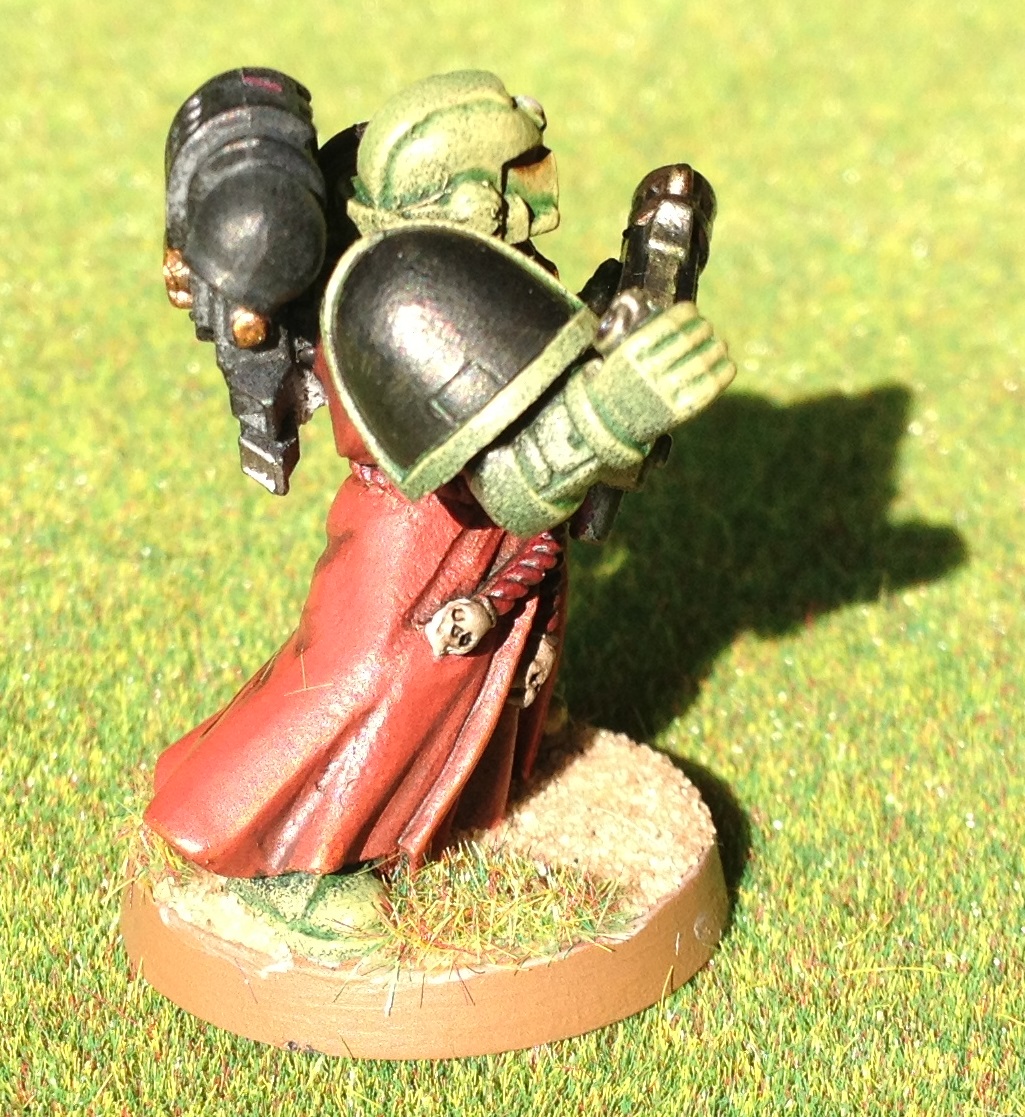 In my version of the Salamanders scheme, red is the standard contrast colour for the green armour. I use it for things like jump pack harnesses, block colour on tanks and for details on weapons etc. I already knew that it would work for a robed model because on of my other veteran sergeants had already had the same treatment.

The paint scheme for the robes is very simple, but very effective. Basecoat, then wash into the recesses, touch up the raised areas with the base colour again and then highlight with a lighter version of the same colour.

For the one that started life as a Dark Angel, I replaced the Blood Red with Vallejo Model Colour Scarlet and was very pleased with the results. I find that the Vallejo paints are really nice to work with, and the eye-droppers are so much more practical than the wasteful, messy GW pots. I am currently considering switching over to Vallejo completely for my Tau detachment.

My Dark Salamander (or Salamander Angel perhaps) will lead one of my four tactical squads. My standard weapon loadout for these squads is melta, multi-melta, combi-melta. I tend to call these "Vulkan" tactical squads for obvious reasons.

Here are all my combi-melta wielding sergeants: 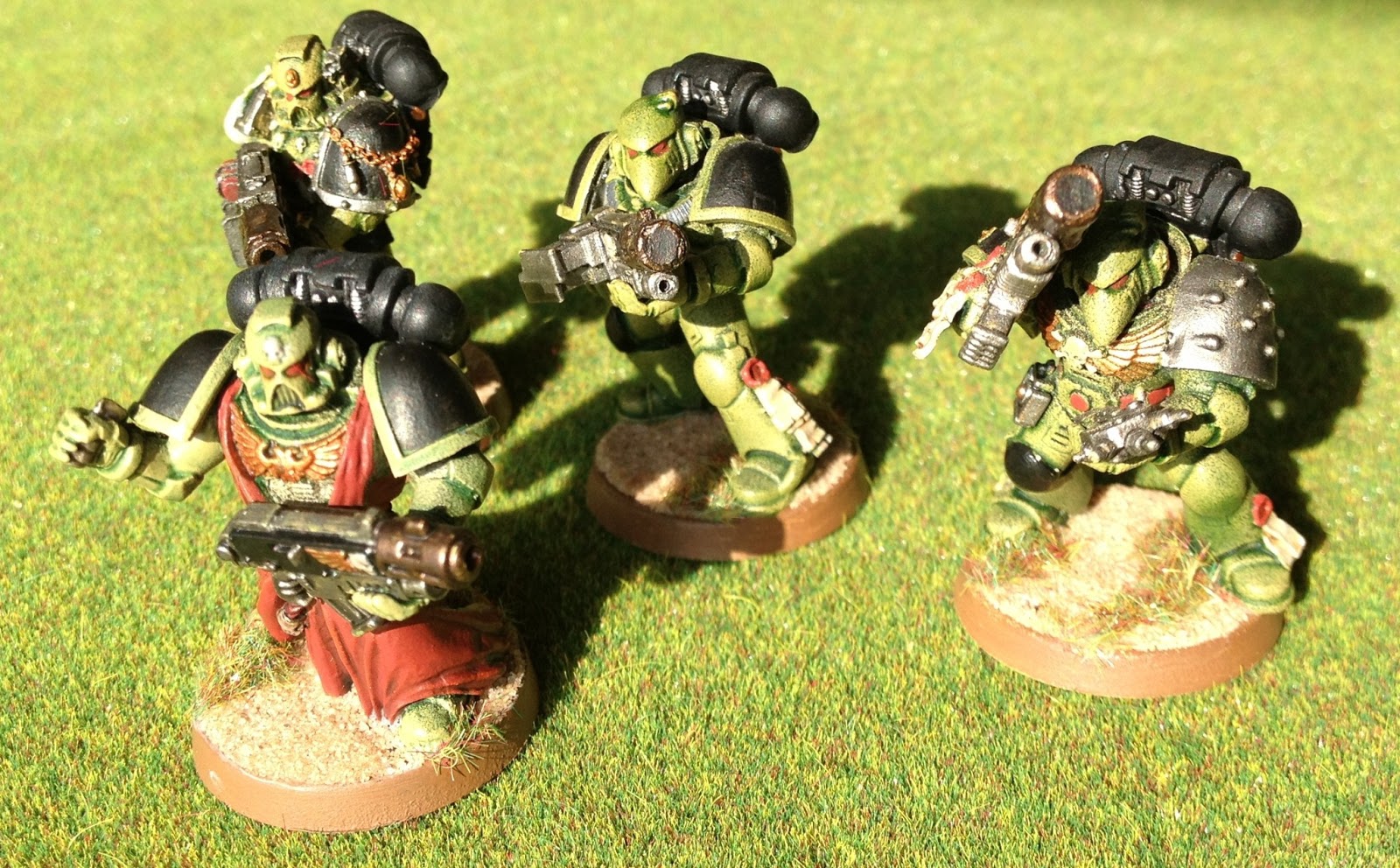 The rest of these started life as sternguard vets. The guy at the back left is one of the official GW finecast sternguard, and one of the very few pieces of finecast in the army. The others were kitbashed together using various bits from the tactical squad and terminator boxes with press moulded melta tubes. As my list-building changed I realised that would be more useful as tactical squad sergeants, and that is their main role on the battlefield now. 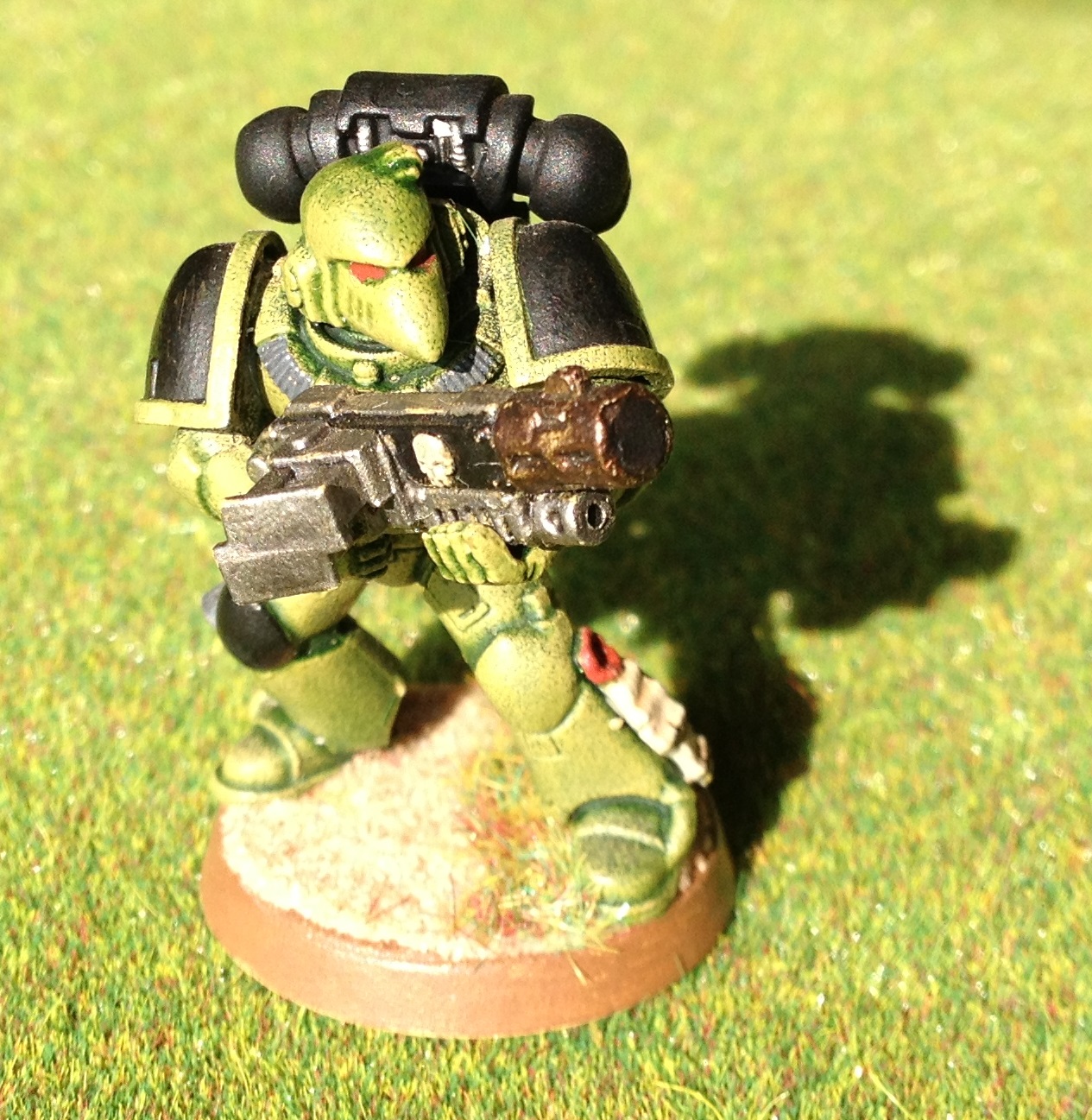 This guy has a terminator box mag on his combi-melta. Gun nerds will notice that the spent shells would shoot directly out into his face! Oh well. He's safe in his power armour and being showered in spent shell casings is quite spesh mehreeny and heroic anyway. He's probably a bit short of decoration to be a sternguard or a sergeant, but he's got the combi-melta which is the important thing. 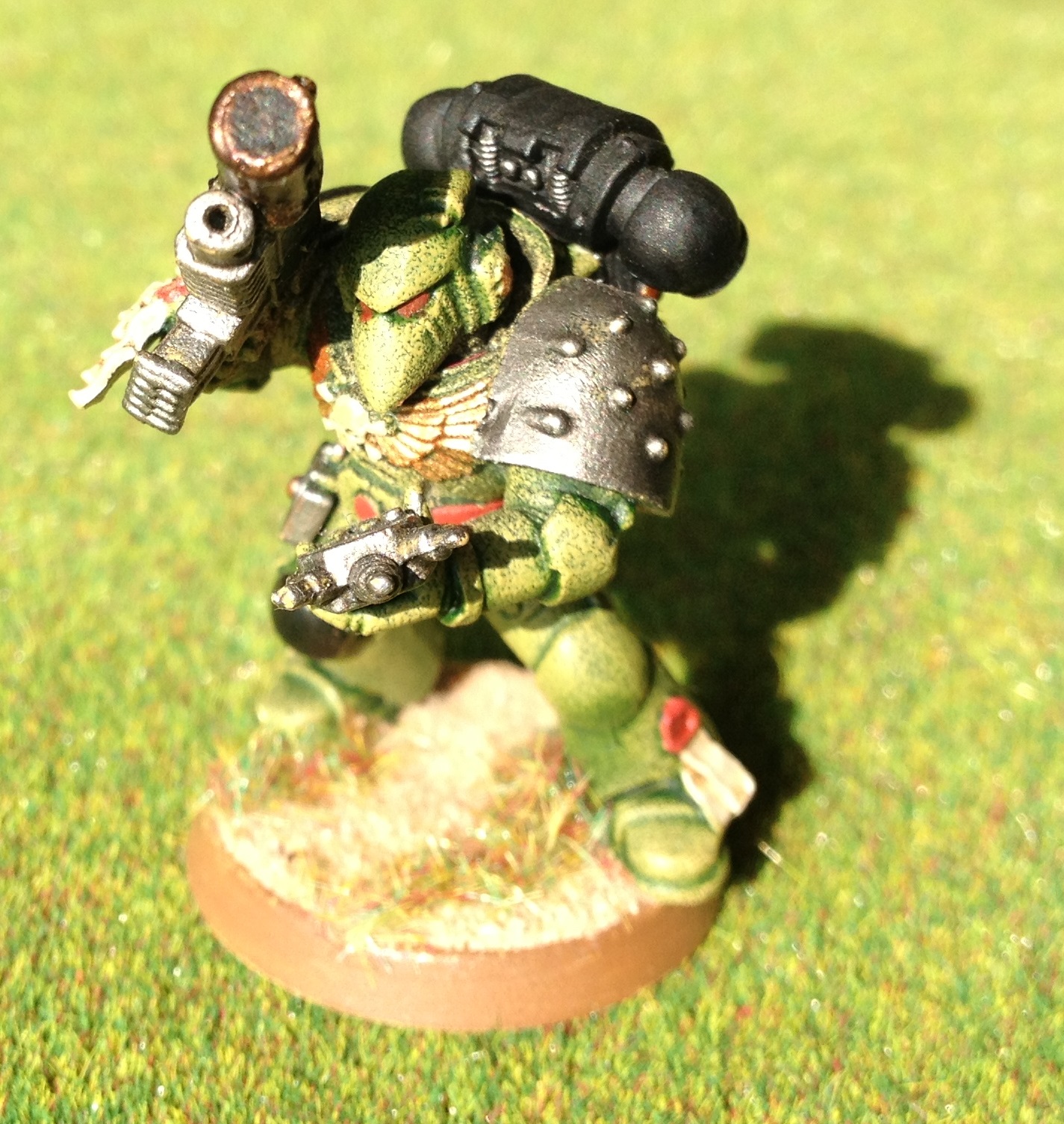 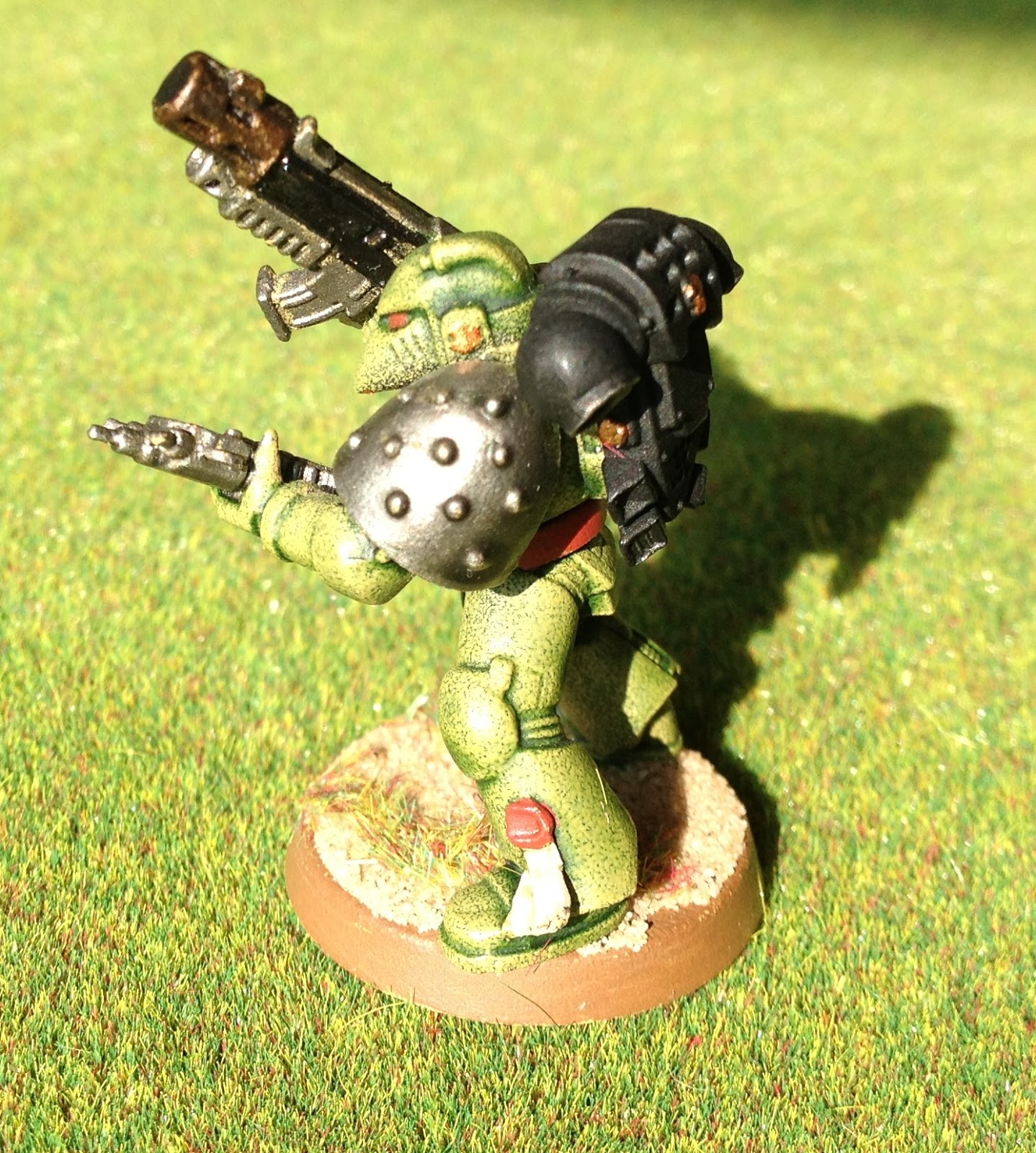 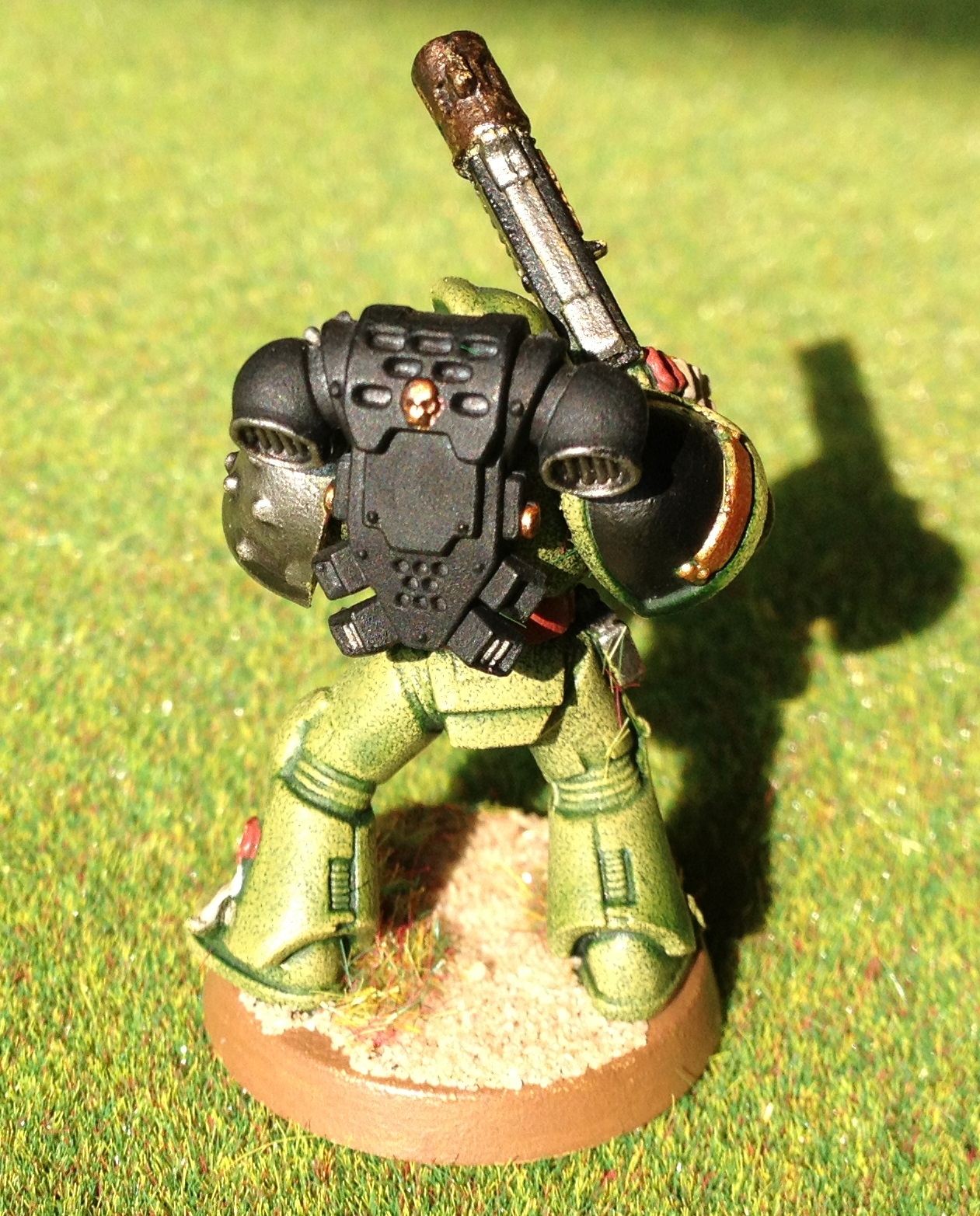 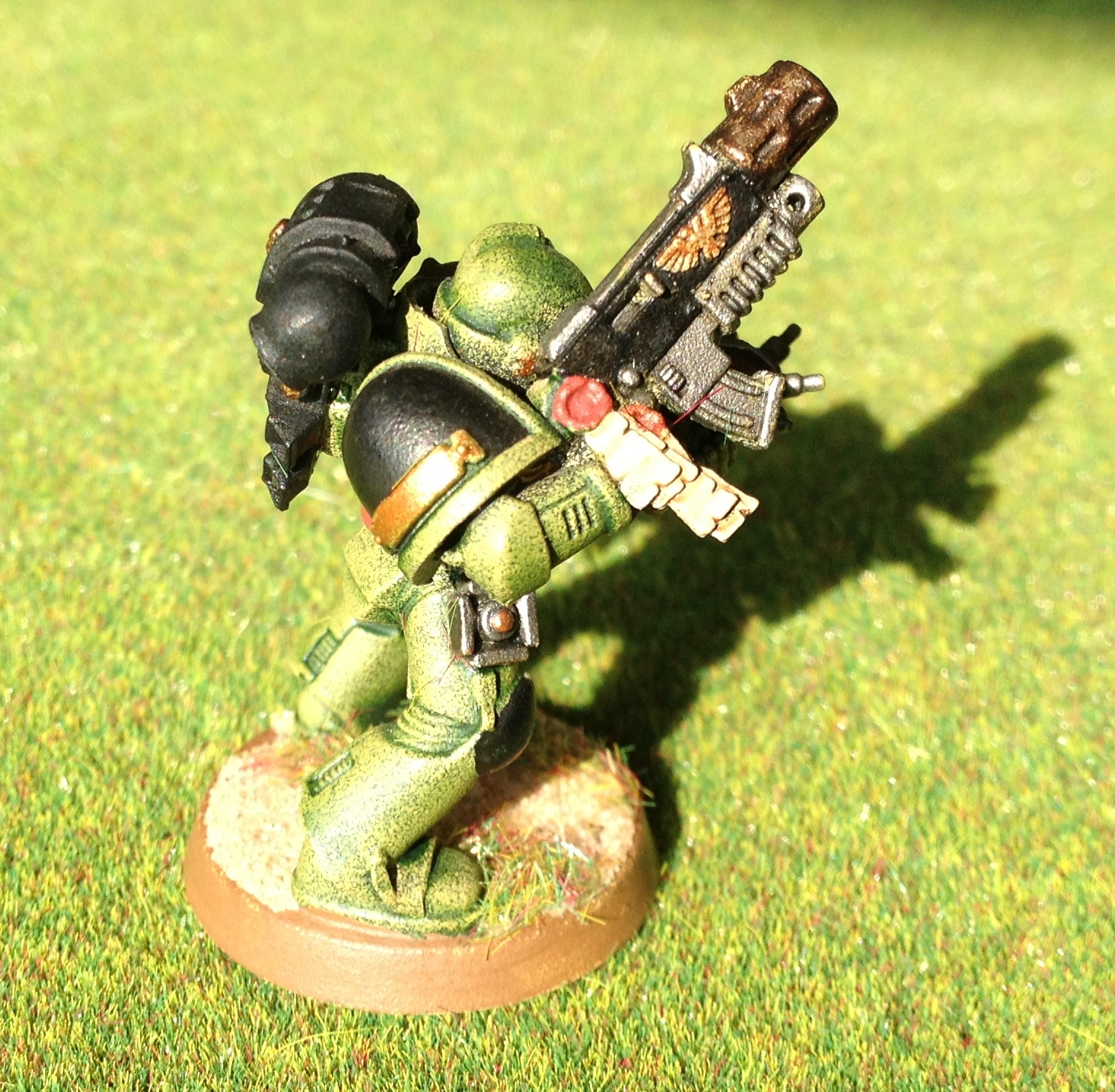 This the favourite of my sternguard / sergeant kit bashes. I had to bit a bit of greenstuffing to make him look like he was reading the auspex, and I gave him the rogue trader style knobbly metal shoulder pad too. I always remember this from the artwork on the old 1908s space marine blister packs. 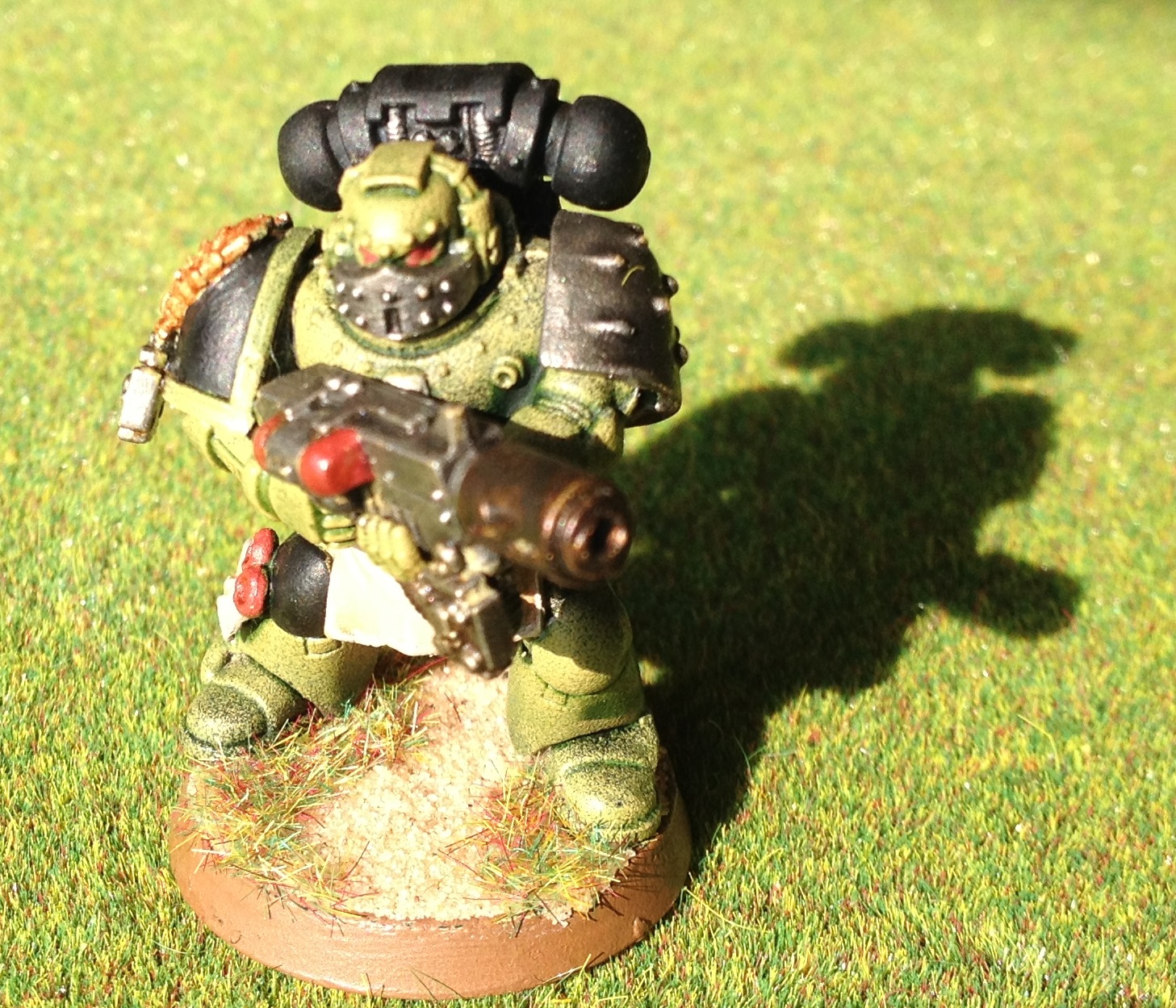 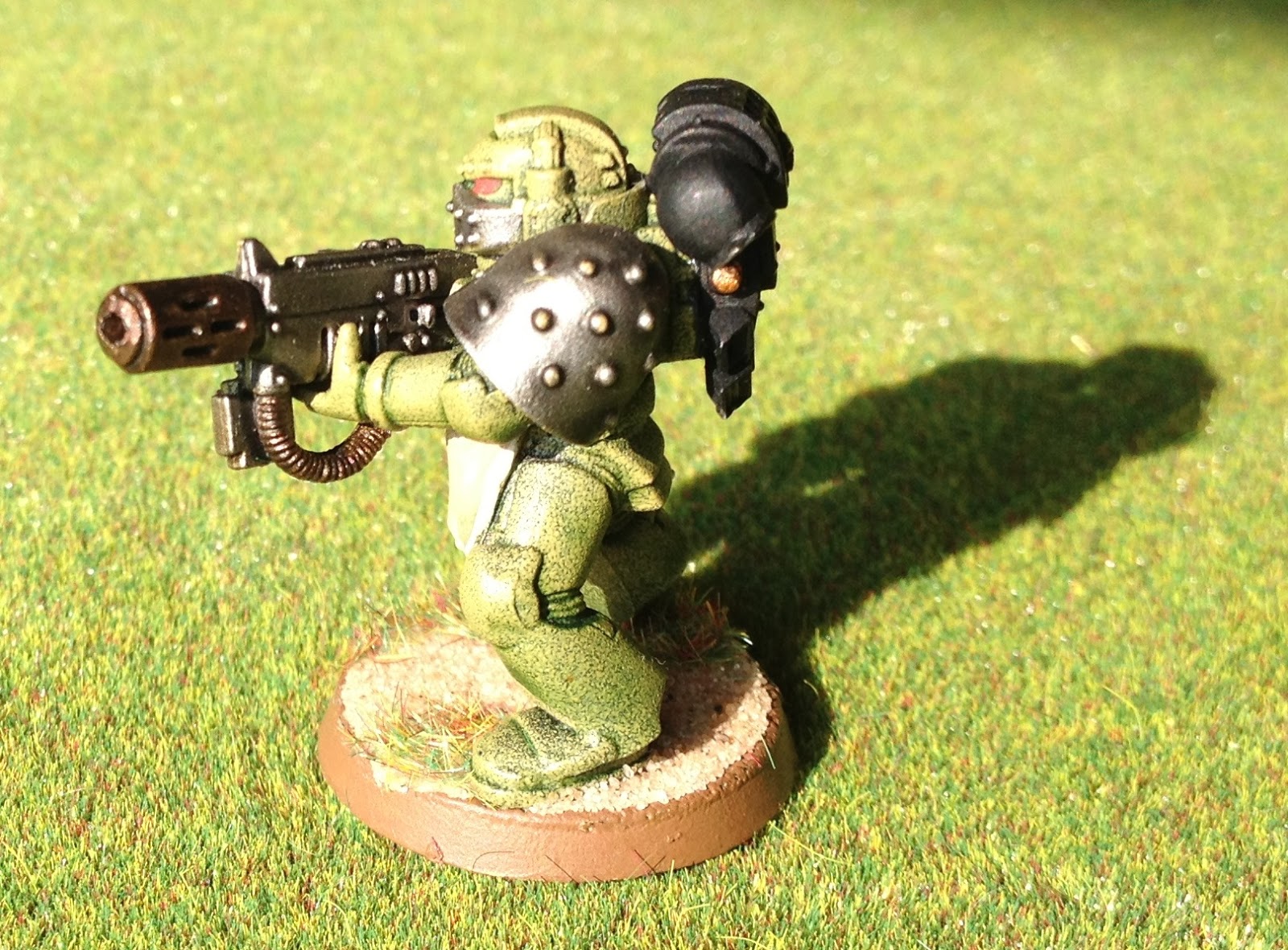 A veteran meltagunner with a head from the venerable dreadnought kit, terminators honours (two lots for some reason!) and the 1980s stlye shoulder pad.

Note: I had just based these models hence the stray bits of static grass on the power armour and other places where it shouldn't be! It's not glued down and will not be a permanent feature!

As usual, here are some bonus pictures: 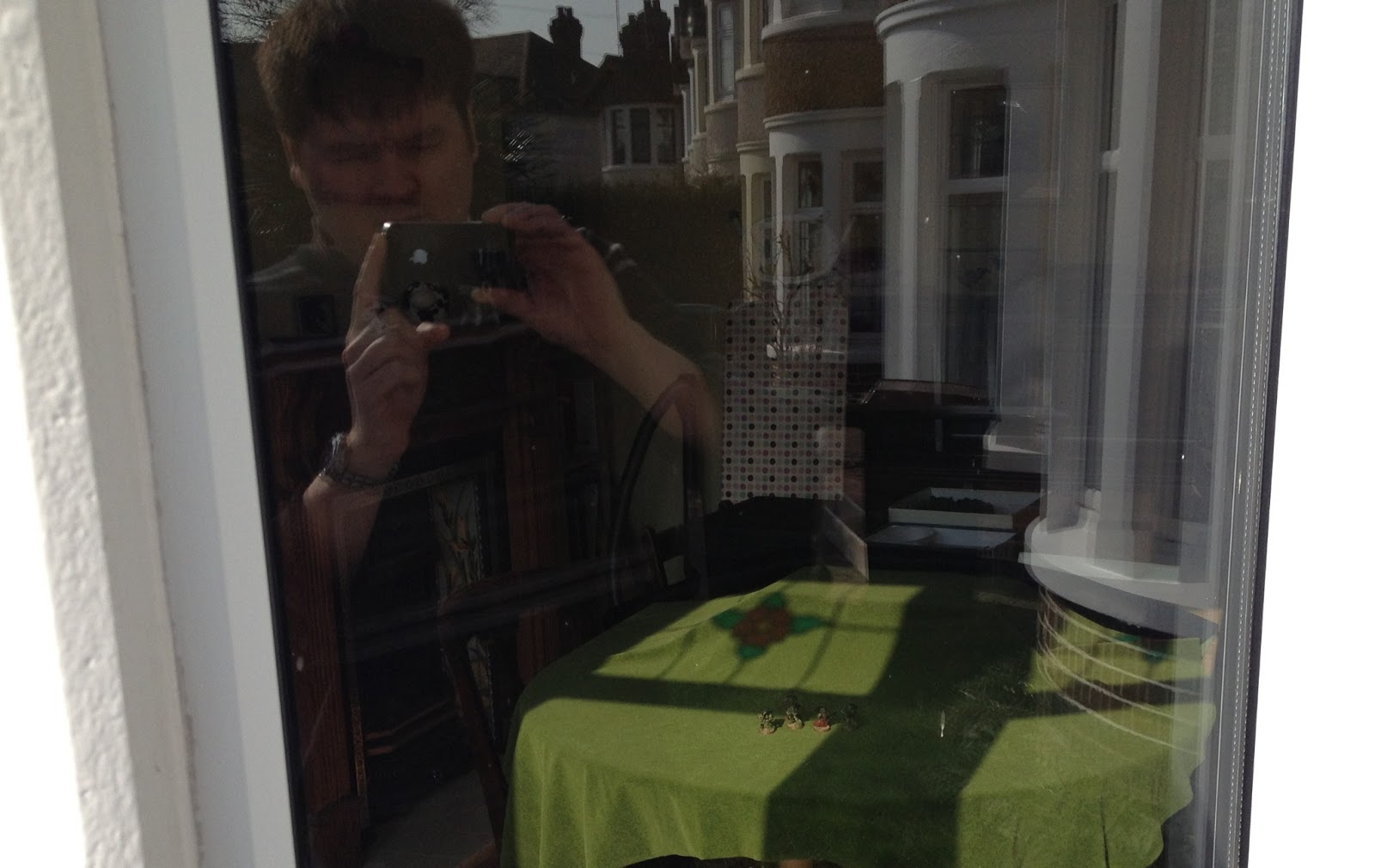 I take these pictures in my front window. Passers by must think I am a proper nerd! We did once have some dickheads start taking the mick while we were playing Space Hulk so on the rare occasions when we play in the house the curtains remain closed. 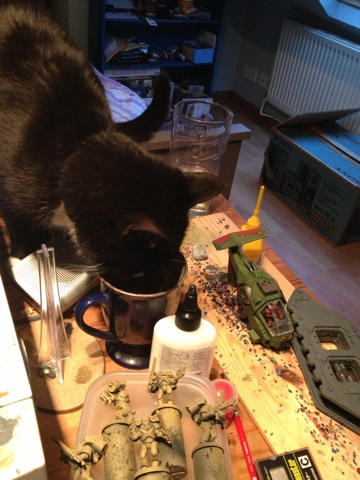 Poor 40k cat's water bowl had been moved because we were having plumbing work done and I forgot to put it back. She decided that the best way to let me know was to try and drink my paint water in the Nerd Workshop. I got the message and gave her some fresh water, and rest assured she did not actually manage to drink the paint water.

Posted by Danny Kastigaunt at 01:48