I am about half way through work on my Salamanders army, and Poot suggested that I did a blog post showing the progress so far.  It's currently worth about 2300 points give or take a few, though obviously you couldn't legally deploy it like this as there are too many HQ and elites.

This army started life as a Space Marine Battleforce and its been gradually added to over the last six or seven months. There's a real mix of minis in there - the Techmarine dates back to the Rogue Trader days, and the Dreadnought is one of the metal ones they introduced in about 1993. I was lucky enough to pick it up new in its box for less than the price of one of the current plastic kits. At the other end of the spectrum is Vulkan He'stan in white metal and the finecast sternguard which I think would both have been new during 5th edition.

There are also some conversions and kit-bashes in there which I'll write about in separate posts.

The Techmarine might seem a bit of a strange choice, but I love those 80s models. When I found out that fielding a Master of the Forge lets you run dreadnoughts as heavy support, I decided to get this guy and use him as proxy. 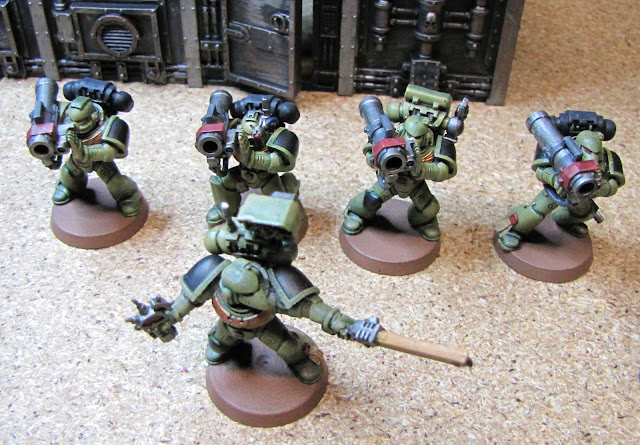 These devastators don't see the table as a unit very much, but the missile launcher models often get used in tactical squads. 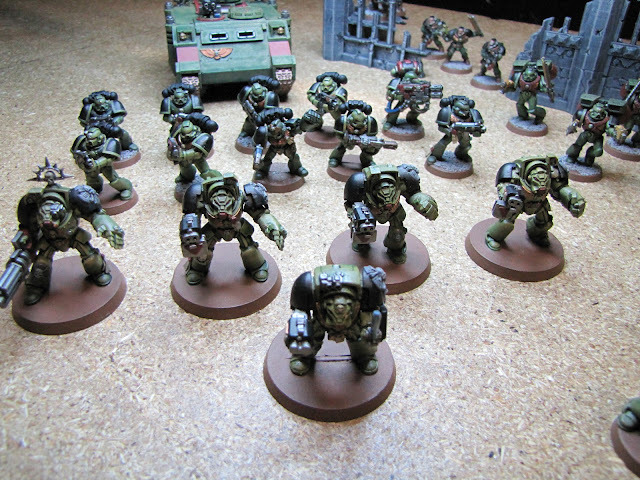 Both the terminator squad in foreground and the tactical squad in the background of this picture have metal sergeants in a plastic squad. I do this for two reasons... 1. Putting an extra model in usually means you have a spare plastic body to use for an extra weapon option that would otherwise go unused in your bits box. 2. I love old fashioned metal models and it give me a good excuse to buy them!

For example, the spare model in the Terminator squad has the cyclone launcher, so I can just swap him into the squad when my list calls for it. 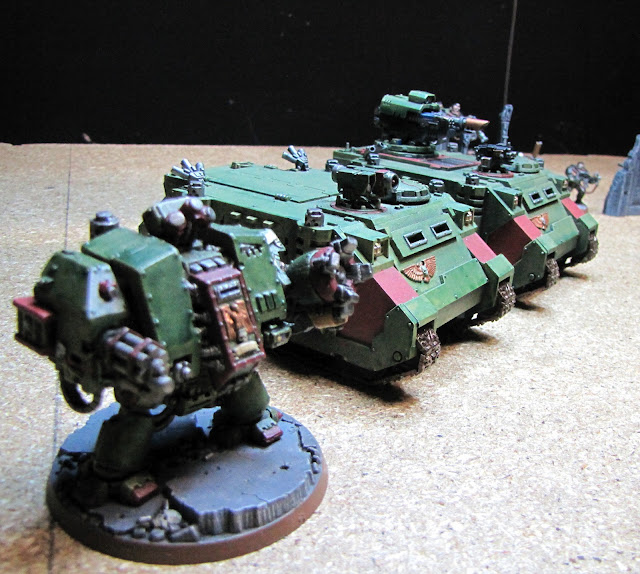 So before this army, or rather the first phase of it is finished, I will be adding:
In the longer term I've got ambitions for a Tau detachment, and perhaps a Stormtalon and some Landspeeders for fast attack options.

Here's a (mostly) WYSIWYG list of the stuff that's currently finished. There are some things that I'd do differently if I was making the models again because they don't get used much in games (like the sergeants with plasma pistols), but anyway here's how it comes out points-wise.