Having finally decided that I'd build a space marine army I needed to decide which chapter I wanted my marines to be from. I wanted to do something that was a little bit obscure… something that I remembered from the Rogue Trader days.

Space Wolves, Grey Knights and Blood Angels were all definitely out. There were far too popular and I don't really approve of marine chapters having their own separate sets of rules. Also, I was steering well clear of Ultramarines, even though they were my chapter during Rogue Trader / 2nd edition, and they are featured in the game that got be back into 40k. Ultramarines are everywhere, and I wanted something a little bit different.

I eventually chose Salamanders. They aren't anywhere near as obscure as I remember them being, and they even have a special character in the current marine codex. The main thing that I recall about Rogue Trader era Salamanders was this picture from the 1989 White Dwarf Compendium. This was back in the days when Space Marines were allowed to wear camouflage, and came from a page of camouflage designs that marine chapters used for various campaigns.

One day I might try to paint this scheme, perhaps even on my RTB01 marines that I received recently. However, what I really needed was a nice scheme in main Salamanders colours of green, black and red / orange that could be used to get models ready for the table very quickly.

A friend suggested that I used miniwargaming's Quick and Dirty Salamanders scheme. Here's the video tutorial.

If you'd rather not watch the video, here are the main steps

If you get it right, the scheme means that when the wash is applied, the model pretty much highlights itself. On the raised areas you get a really nice highlight that is very nearly pure yellow, and on the rest of the model you get a really nice range of greens that make the model look a lot more interesting than if it was painted with a solid colour and left unhighlighted.

This model is half way through the process. It's had its green wash applied over the dusting of yellow and is in the process of drying. You can already see that this model is looking about right, and the highlights are going to come out quite nicely. 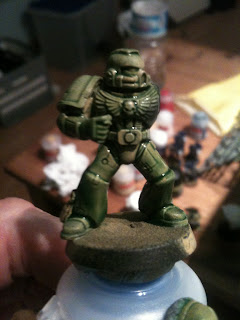 Here are the first few marines that I finished using this technique. I was really pleased with the results considering these were the first miniatures I'd painted for about fifteen years. 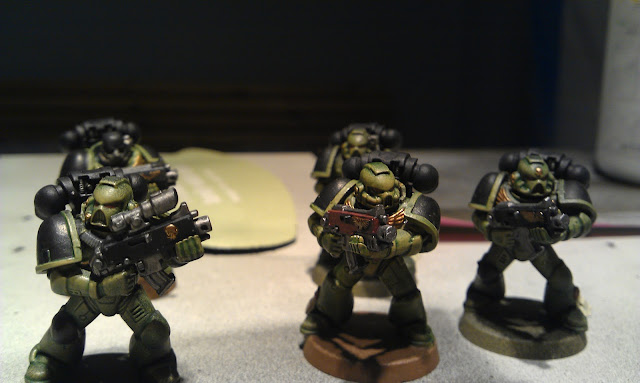 The trickiest thing with this scheme is getting the right amount of yellow spray on the model, and this is one thing that the video doesn't cover in much detail really. I have found that it's best to be pretty conservative with the spray. A perfect coat will mean that the raised surfaces like the front of the helmet will be completely yellow, and the deepest corners will be almost completely black. If you use too much spray, the model can end up being too yellow and when the wash is applied you don't get a very good range of range of greens.

There are some drawbacks to the approach. As the chap mentions in the video, if you make a mistake, you can't just paint over it. The yellow spray / green wash combination is subtly different on every part of the model, and can't be easily recreated. That said, mistakes can be corrected with a little bit of patience, and I'll do a short post on this separately.

Also, no two models will look exactly the same. Well, this isn't quite true… its more that not two squads will ever look the same. It is just not possible for it to be completely uniform across your entire army. This doesn't particularly bother me, but I can imagine that it would annoy some people.

Anyway, the results were perfect for my purposes, and I knew this was the right scheme for my army. The big challenge would be applying this to other types of models, particularly tanks and dreadnoughts etc.
Posted by Danny Kastigaunt at 12:43