This week I've commissioned a guest post. Regular readers will know that Poot and I often work on minis together. He's mostly an airbrush-head but when I saw his hand painted Guardsmen following the Games Workshop scheme, I thought that it was worth getting him to write up his thoughts on the scheme. This also gives me a promotion from blog-writer to Editor-in-Chief! 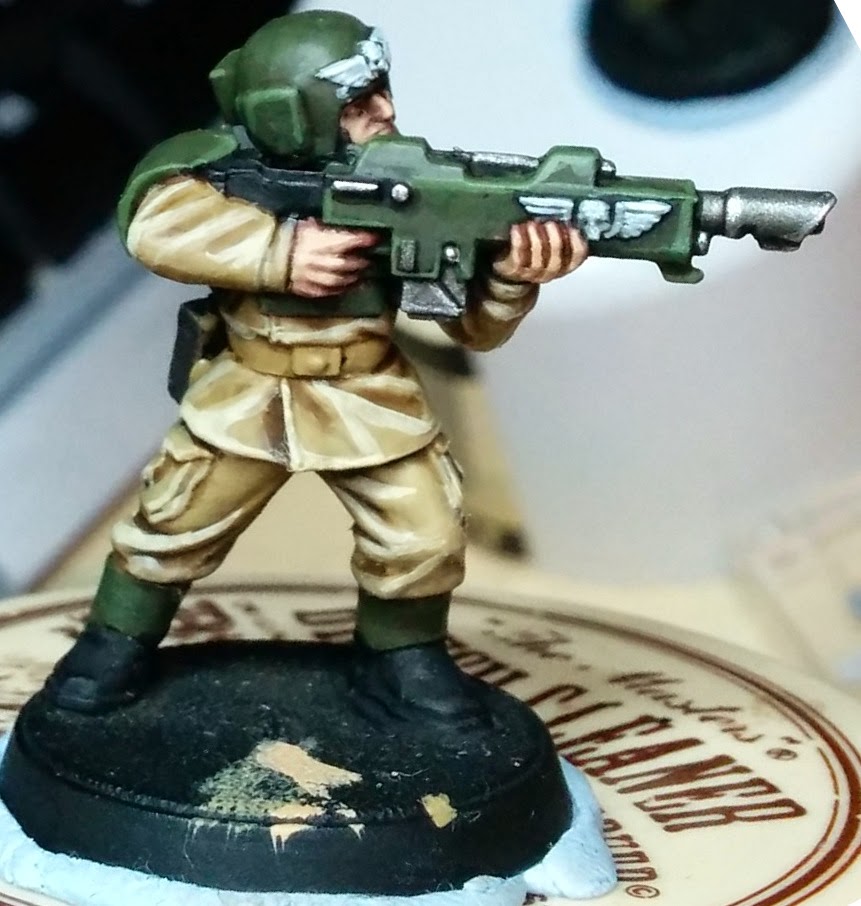 Danny asked me to do a guest post for his blog, as I actually got round to doing some painting, and even "finished" a model. Despite having a few different armies and a lot of different modelling and painting tools and equipment I have not really painted and or finished a great deal of armies single models.

With the new Astra Militiarum book out, I thought I would try my hand at new guard army, with the proviso that I have to actually paint and finish a model before I bought another. This idea was further solidified when I watched the excellent painting tutorials that gw had put up on their YouTube page:

I am a bit of a nerd for watching paint tutorials from a number of sources, and these new videos are really very good, I hope they keep them up.I went to GW to get the few paints I was missing and started work on 3 guardsmen Kobrakei had left in the wargarage for a while. 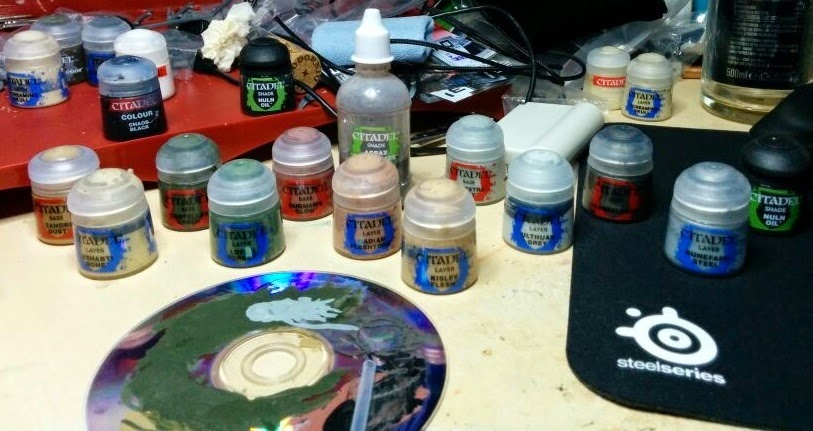 The paint used in this scheme are all from the current GW range:
Working from a black undercoat, the first job is to basecoat the fatigues with Zandri Dust, and the flesh with Bugman’s Glow. These both needed multiple thin layers of paint to get a good coverage without clogging up the details.
Next is another basecoat of Castellan Green. this went on much better, and only a few bits needed a second coat. 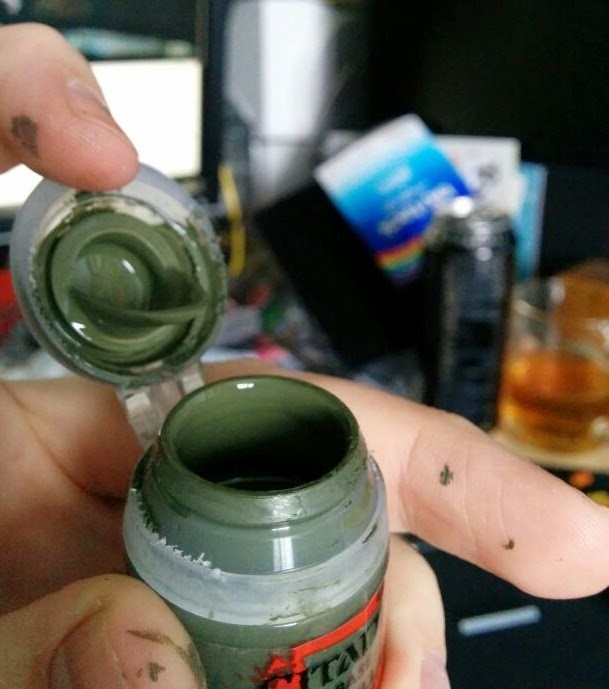 I had opened this pot about four times and it had already gotten into a complete mess, can we have GW paints  in dropper bottles please? Editor's note: He's right. These pots are awful. Listen up GW! 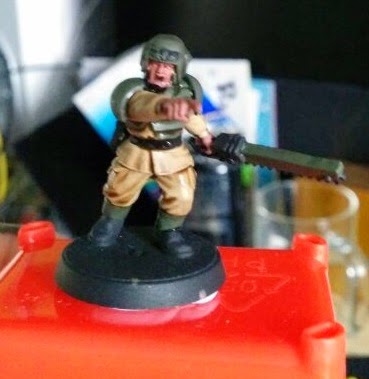 Now he gets an Agrax Earthshade wash. This is actually a 1:1 mix with Lahmian Medium, which I’d made up for washing my Termagants. I didn’t have any normal Earthshade but his worked fine anyway. 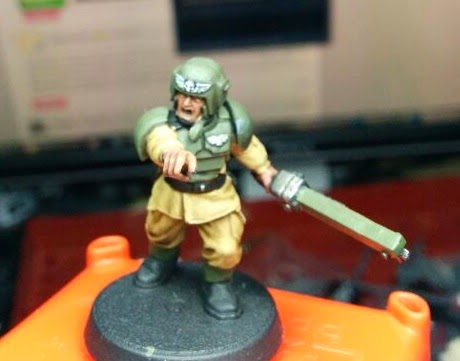 When the wash is dry, base coats of Celestra Grey go on the boots, and Leadbelcher for the metal parts. I used a tiny Winsor Newton series 7 miniature 000 brush to do the wings on the helmet, picking out the raised details. 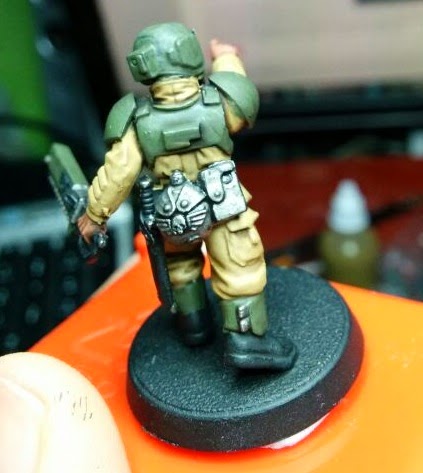 To keep the scheme as quick as possible I just painted all the equipment on his back silver despite the fact some of the bits look more like they are supposed to be leather. 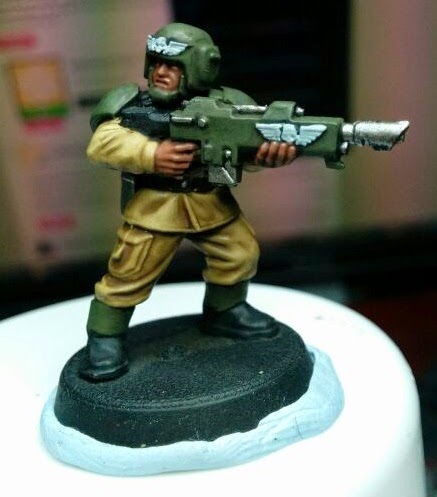 Here's another model from the batch that I was working on at the same point in the process.

Next it is time to go back to the Zandri Dust. The guy on the right has had is fatigues cleaned up by using Zandri Dust as you would use a layer paint, leaving the darker areas that the wash picked out. The model on the left has just had his wash and no clean up. 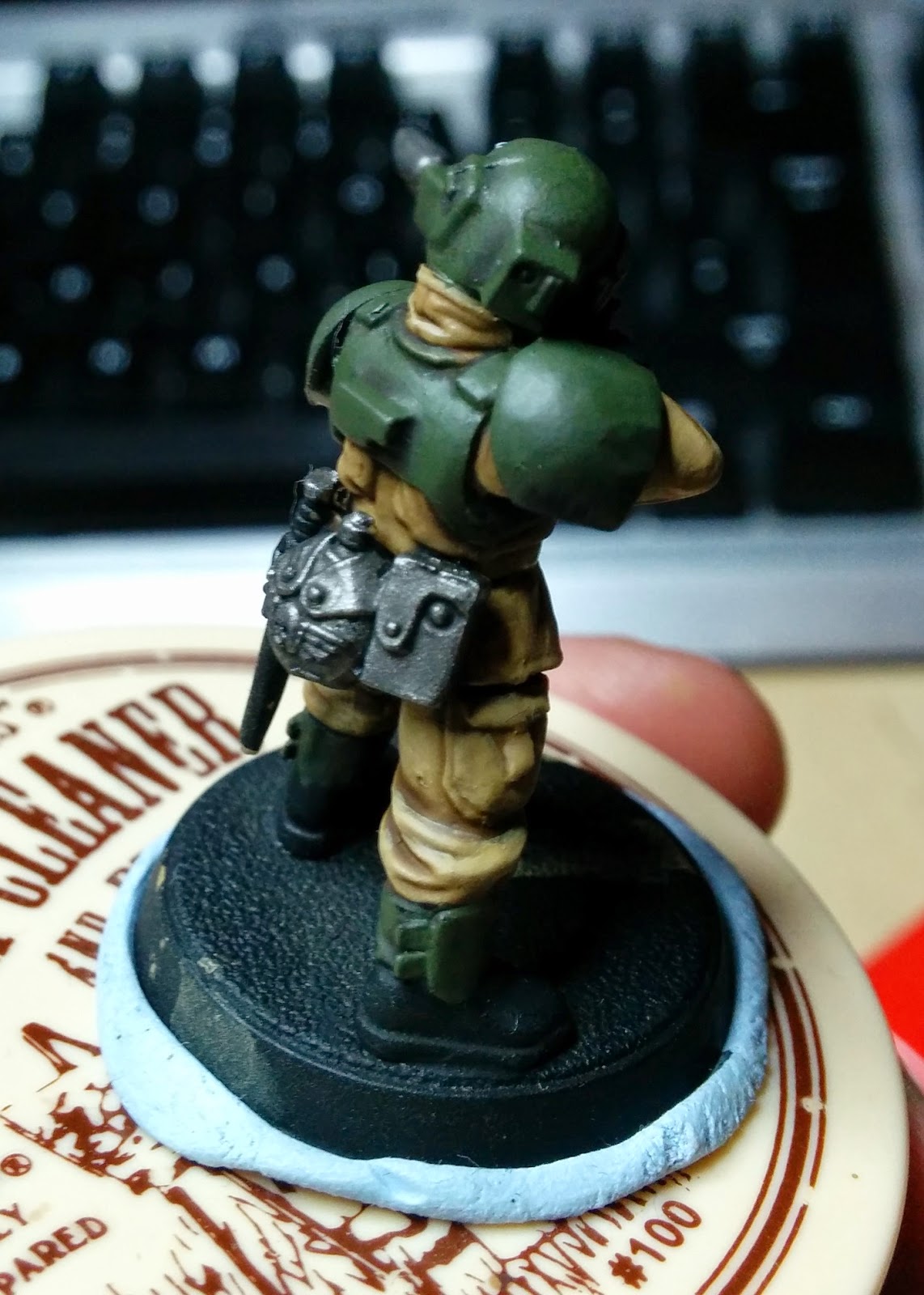 The metal areas have been washed with Nuln Oil, and I have re-based the armour with Castellan Green in the same way as the Zandri Dust in the previous step. 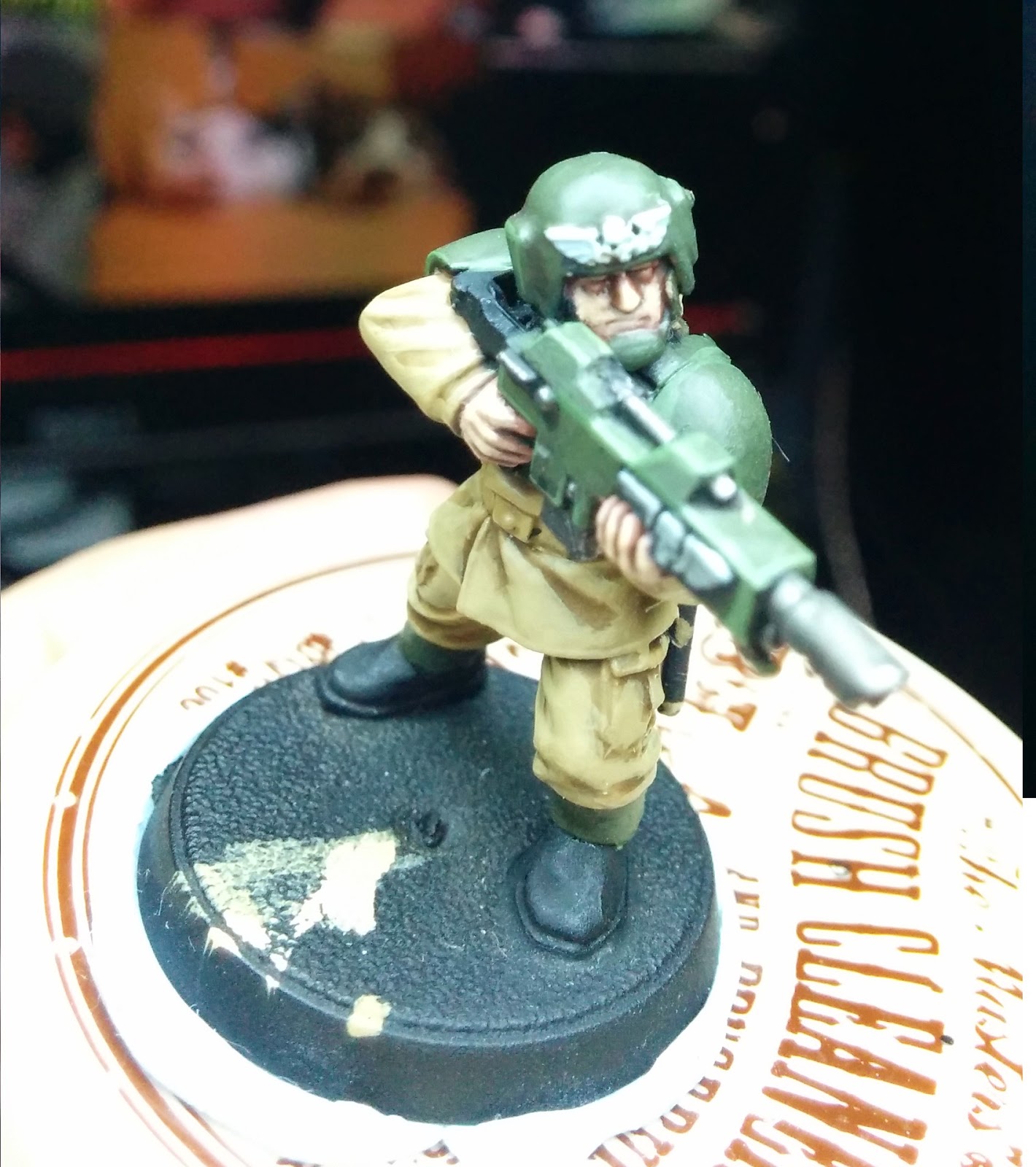 I've jumped ahead a bit here, and made an okay attempt of highlighting the armour and lasgun with Loren Forest. I used a combination of the Winsor, and the GW fine detail brush to do the highlights, and some bits came out better than other. Practise will make perfect. The skin has also been re-based with Bugman’s, then had two levels of highlights, Cadian Fleshtone and Kislev Flesh. 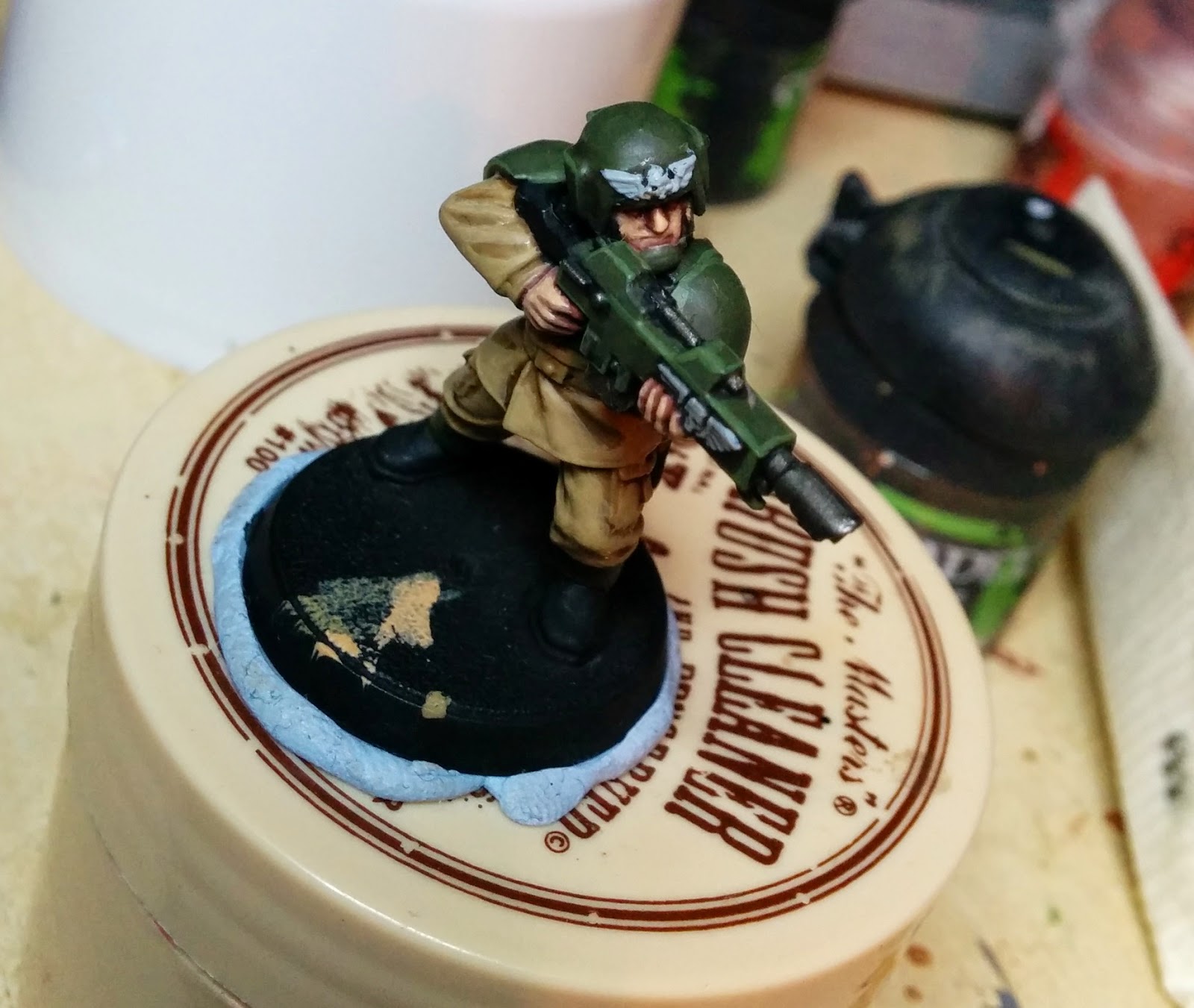 This picture shows off the flesh colours a bit better. 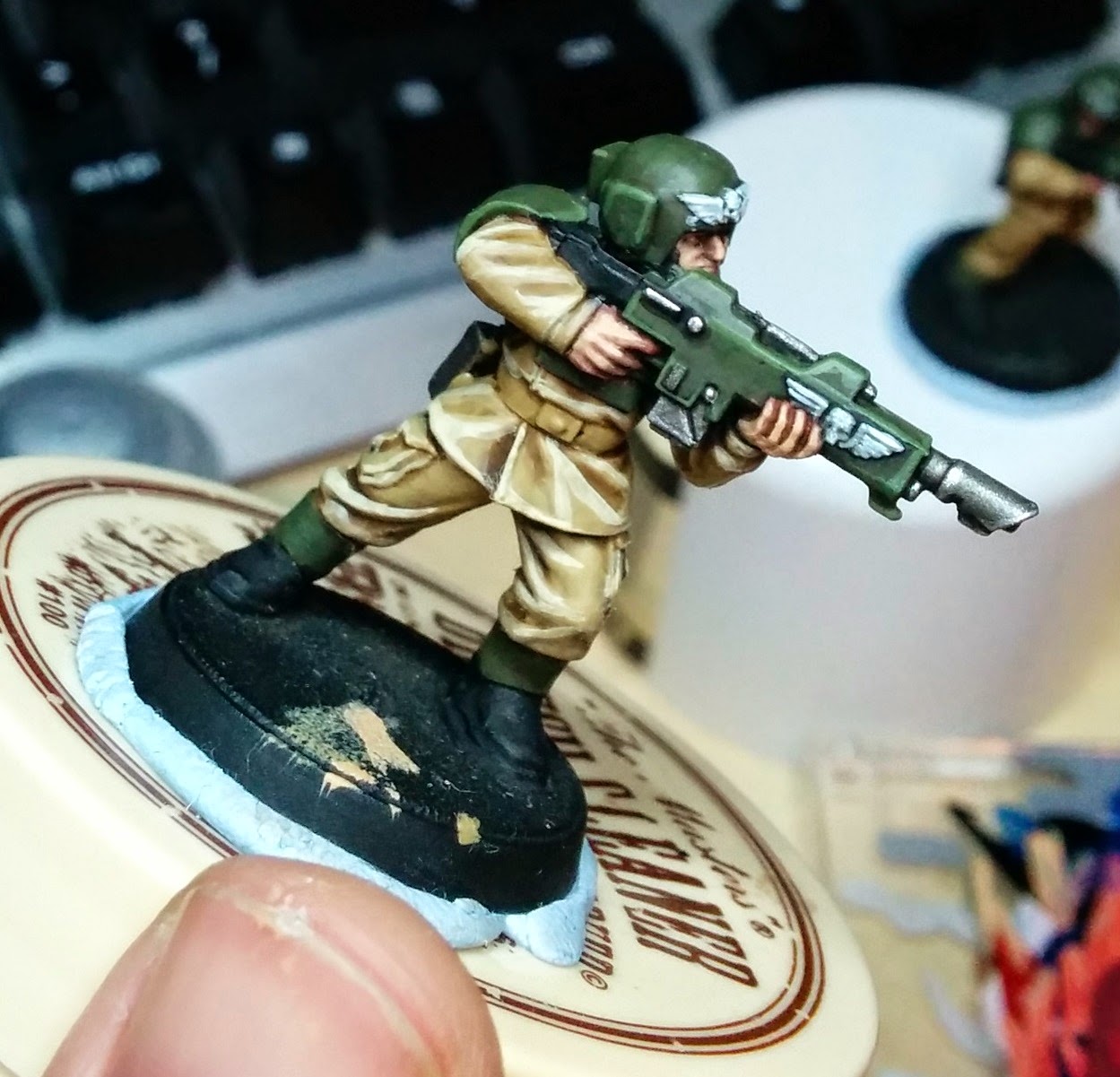 The highlights on the fatigues are Ushabti Bone. I was pretty happy at this stage. Although the highlights are pretty untidy close up, from more than 6” it looks pretty good. The metal parts were also highlighted with Runefang, and the wings etc. with Ulthuan. Again I used my tiny brushes for these parts.The highlights on the lower part of the gun turned out much better than the top.

All in all it was worthy start. Though I do need to paint this guy’s belt to consider him finished! 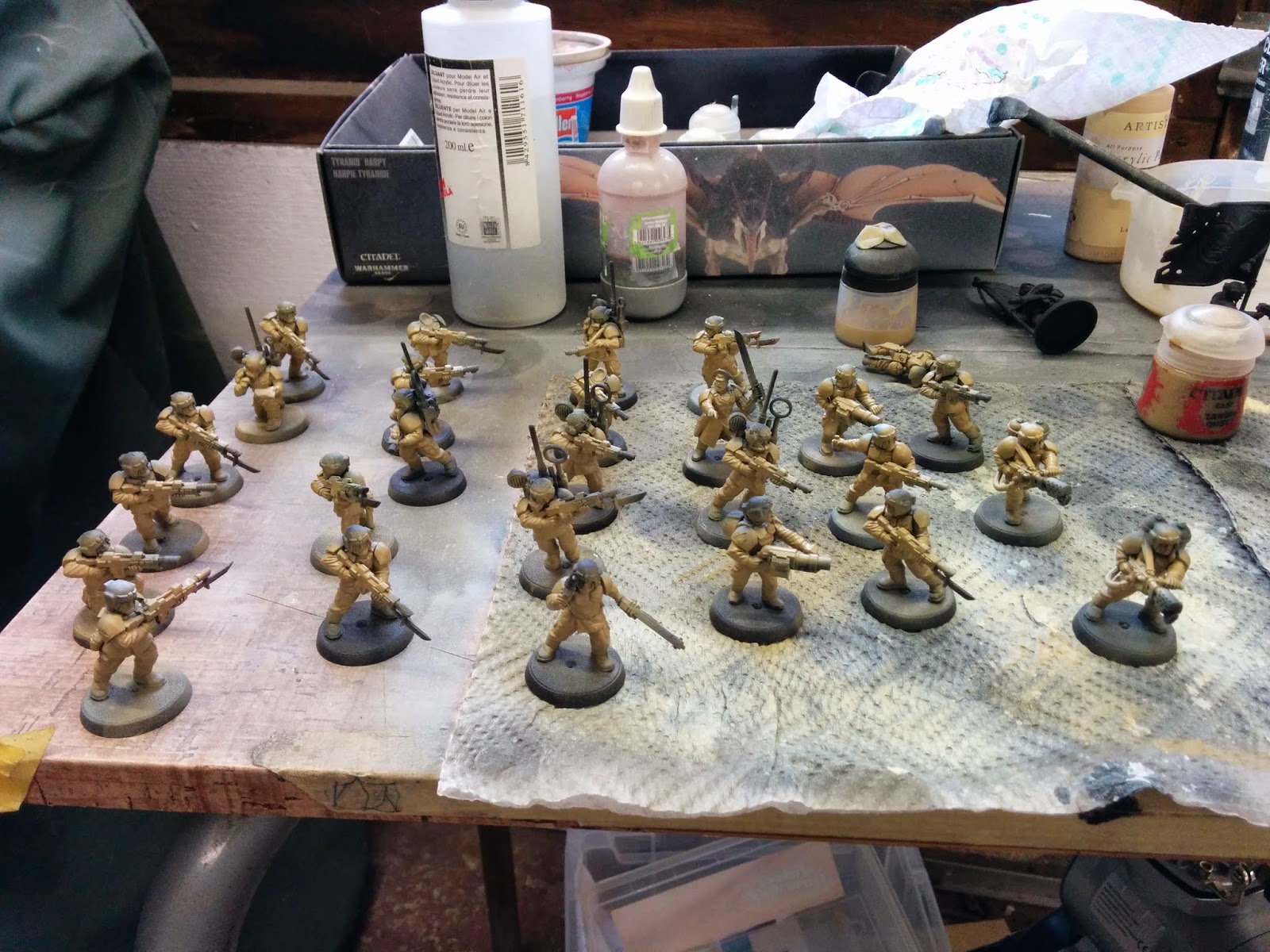 I spent my Sunday morning airbrushing the Zandri Dust on the other guardsman.  Using the airbrush can be a bit finicky, but the finish on these guys is a lot better than the three I did by hand, plus it took me about 10 minutes to spray all these guys (once I’d cleaned my airbrush twice!). 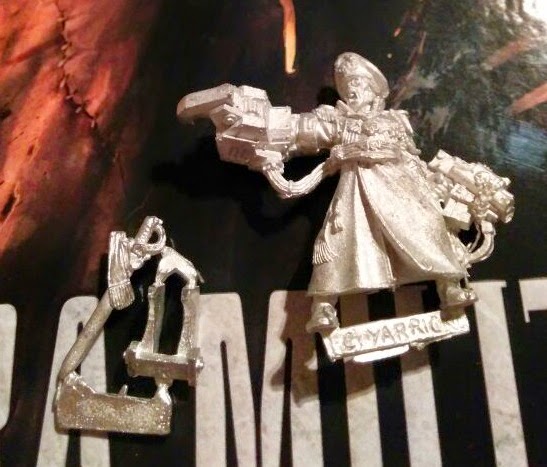 Proviso broken – I dislike finecast, so picked up a Yarrick from eBay. I won’t be painting him until I have had more practice with the rest of the guardsmen.

Here are the next models on my to-do list, lots of 'gants. They have been sprayed bleached bone, and once their carapaces, guns and claws have been base coloured (red, flesh, and black), they will be getting an all over wash with the 1:1 earthshade:medium combo. As I have about 80 to paint, they won’t be getting any highlights on top of that basic paint job, but should look good enough for the table. 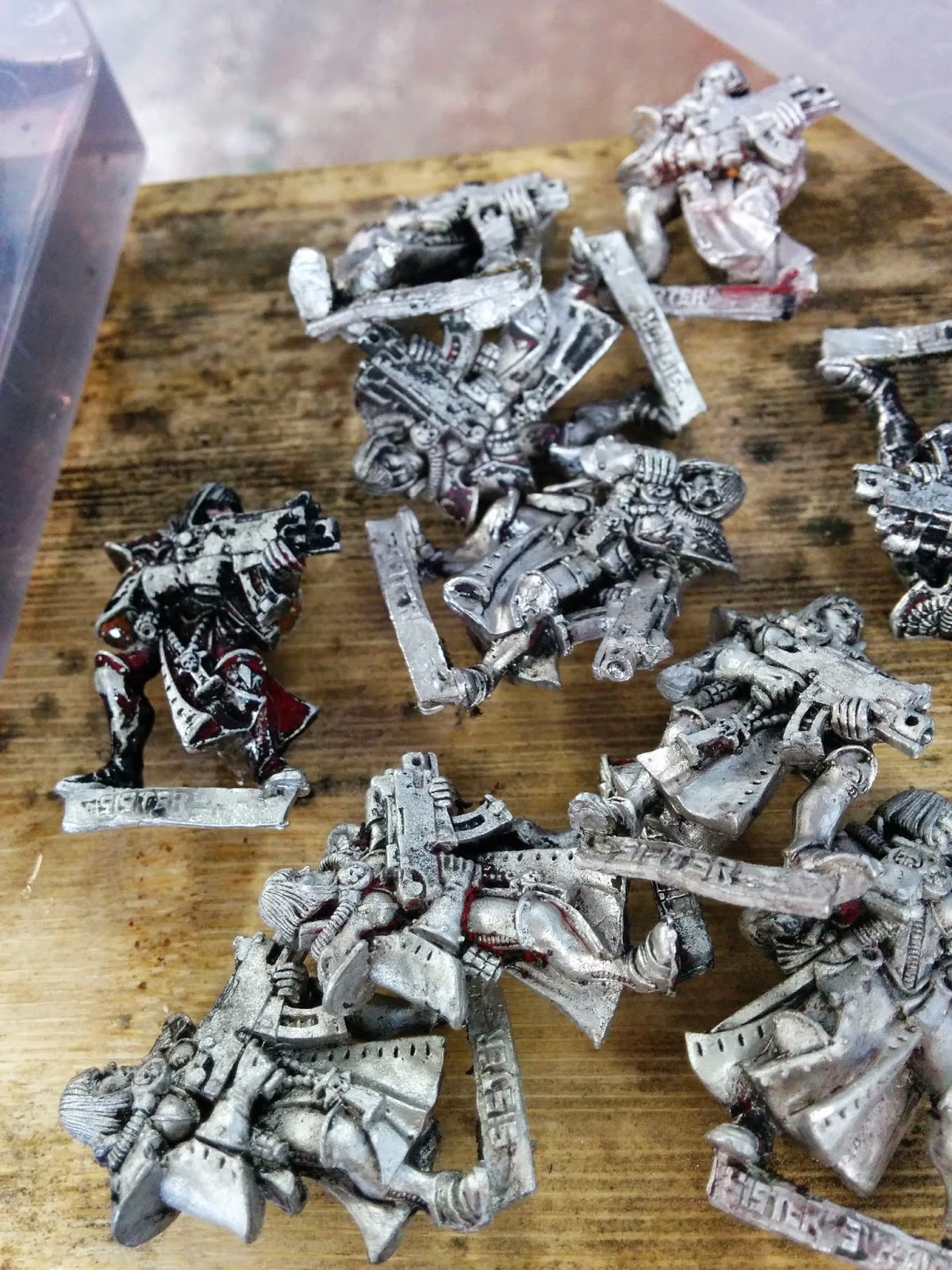 I've also stripped some metal Sisters of Battle who are going to be pressed into action as proxy guardsmen. It's a good way to get them onto the table and gives me an incentive to get them painted.