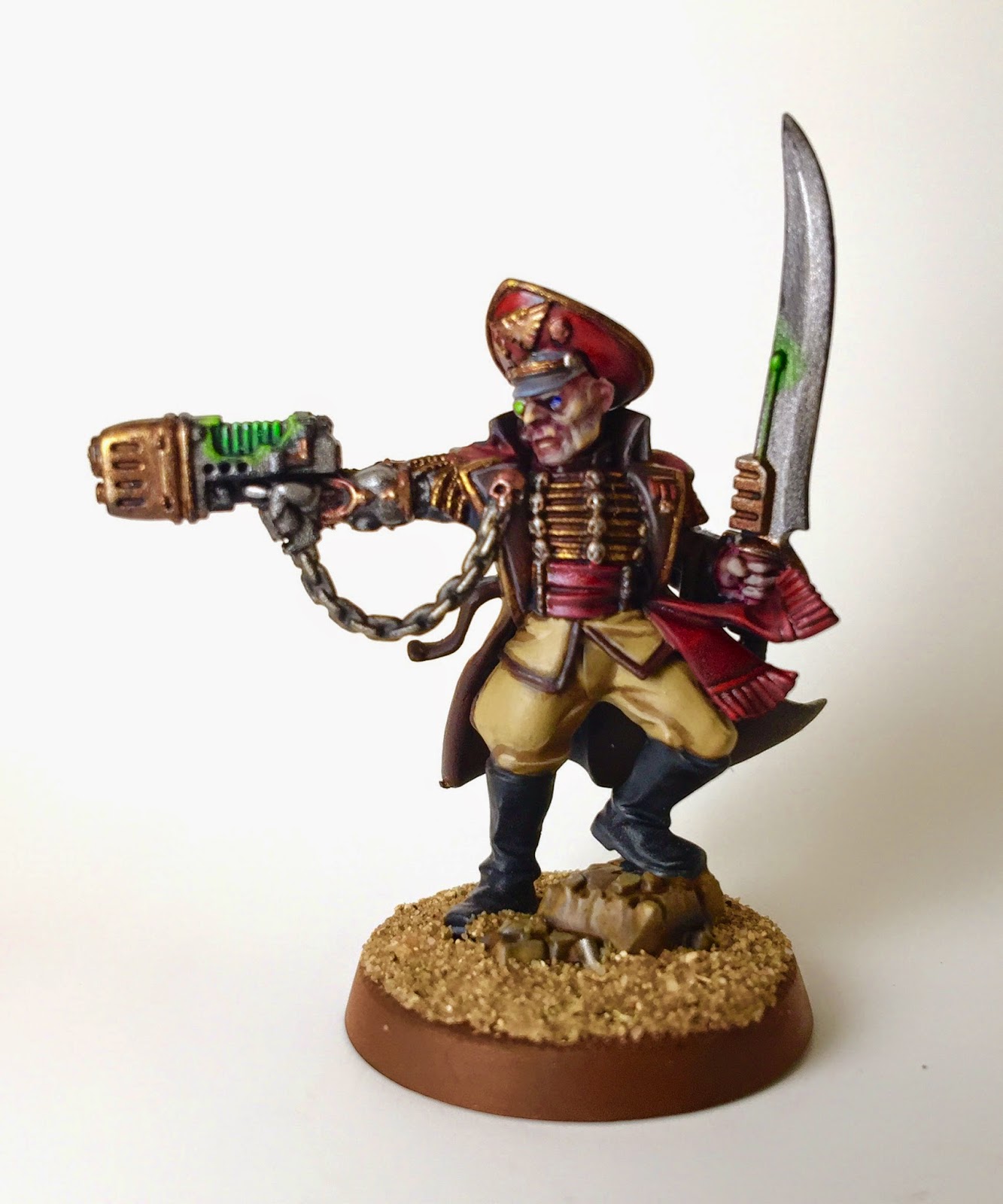 This is another of GW's impressive plastic character minis which I've been really enjoying since they started releasing them. I've even been tempted into painting some fantasy minis. The official version of this mini has an amazing paint job, particularly the face which looks really grizzled and battle-worn. I was very impressed with this and set to recreate it as closely as I could, although for the rest of the mini I've deliberately done something different to the GW version, because as much as I enjoy doing scheme-matches there is more to life than just trying to recreate what someone else has already done better! 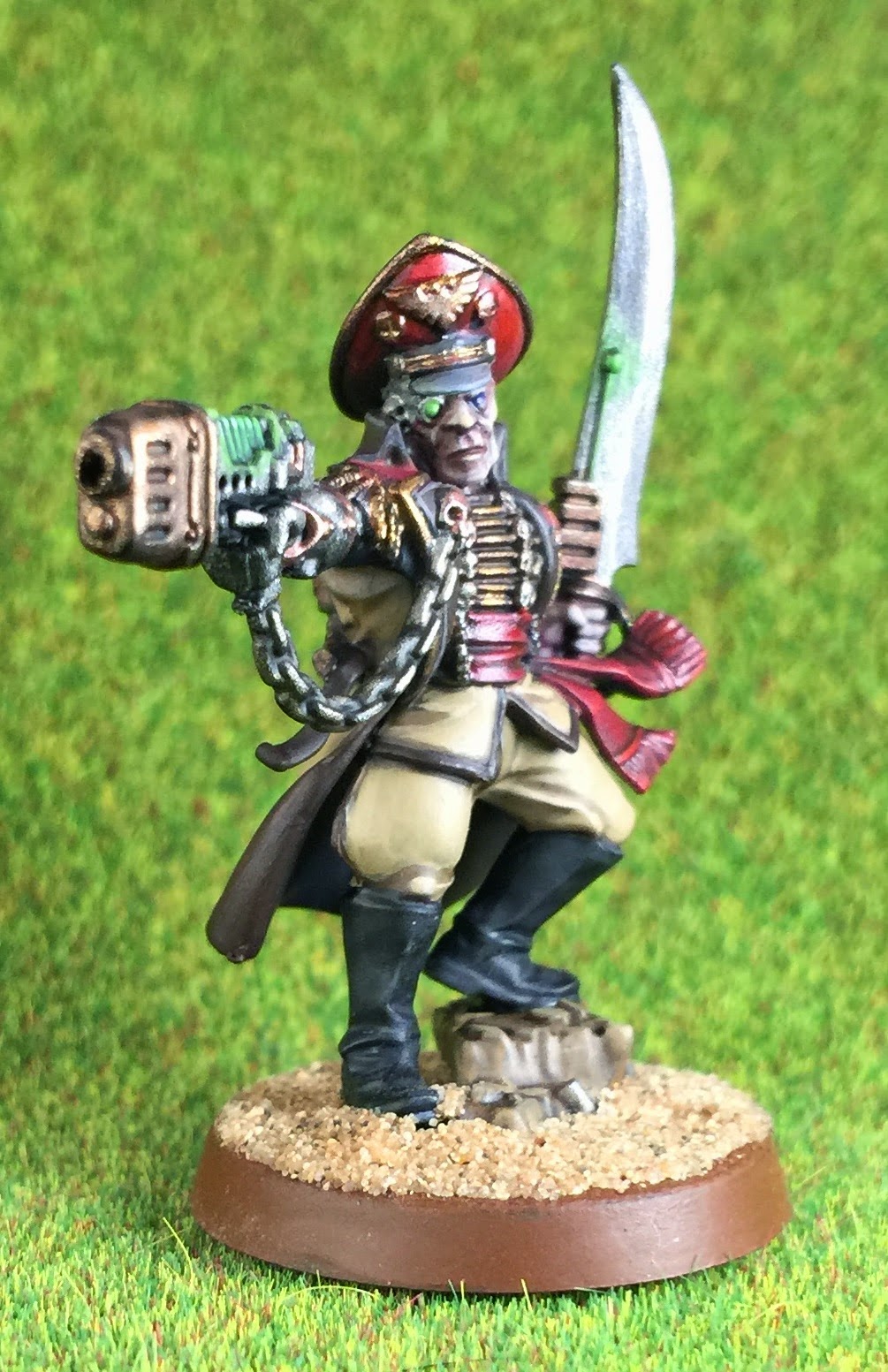 I'm trying to paint these singles to the very best standard I can. Here I've tried something new by using a bright green mixed with some metallic used sparingly for the glow of the plasma cell and a touch on the power sword too. I am told that this is called Object Source Lighting but I think that glow is a perfectly good word! 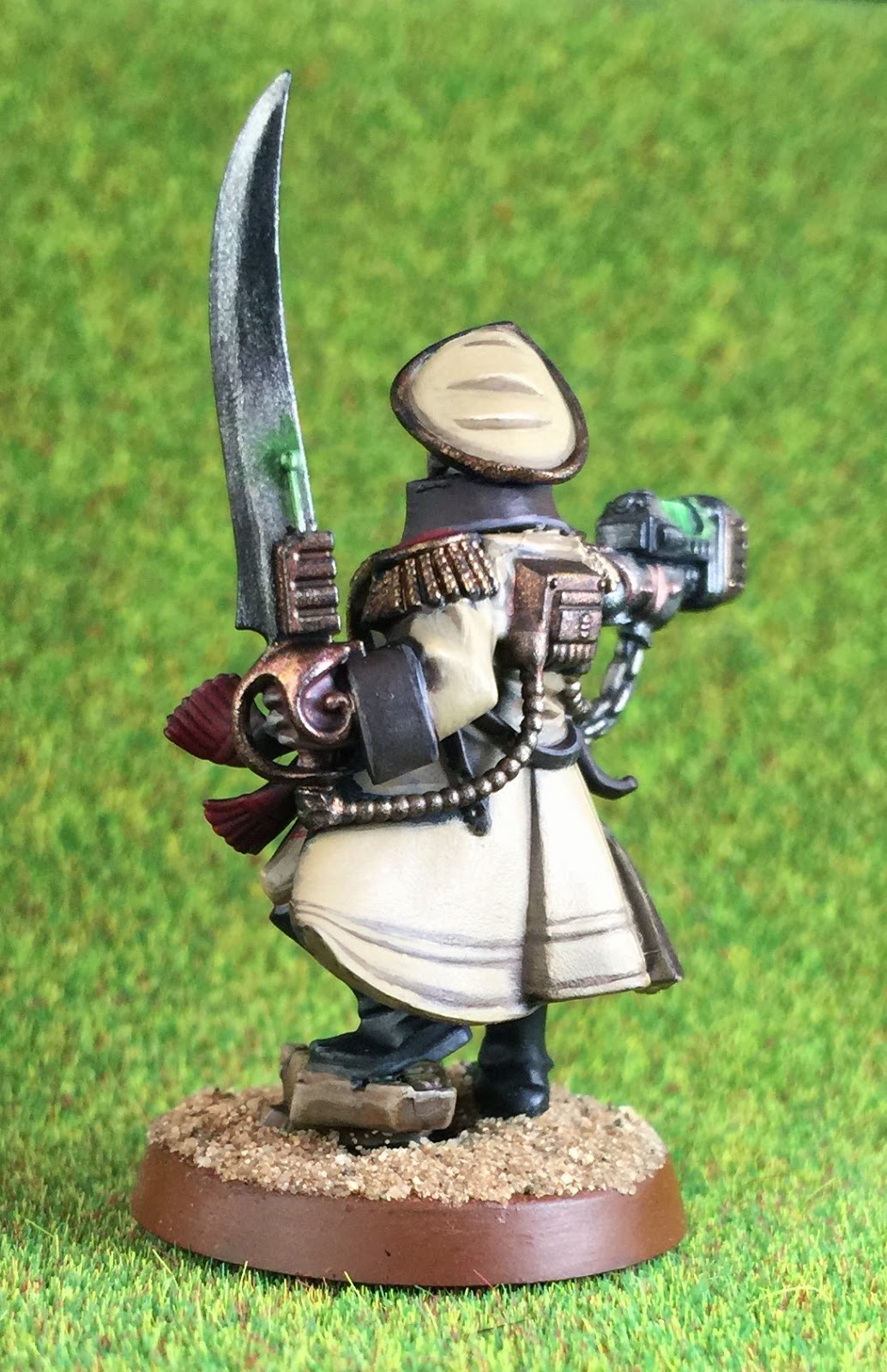 Recently I have been really trying to improve the quality of the metallic areas on my minis. The back face of this sword and the hand-guard have come out particularly nicely. The idea of using the darking metallic from opposite ends of the two parts of the blades was nicked from the official scheme and I will definitely using that one again! 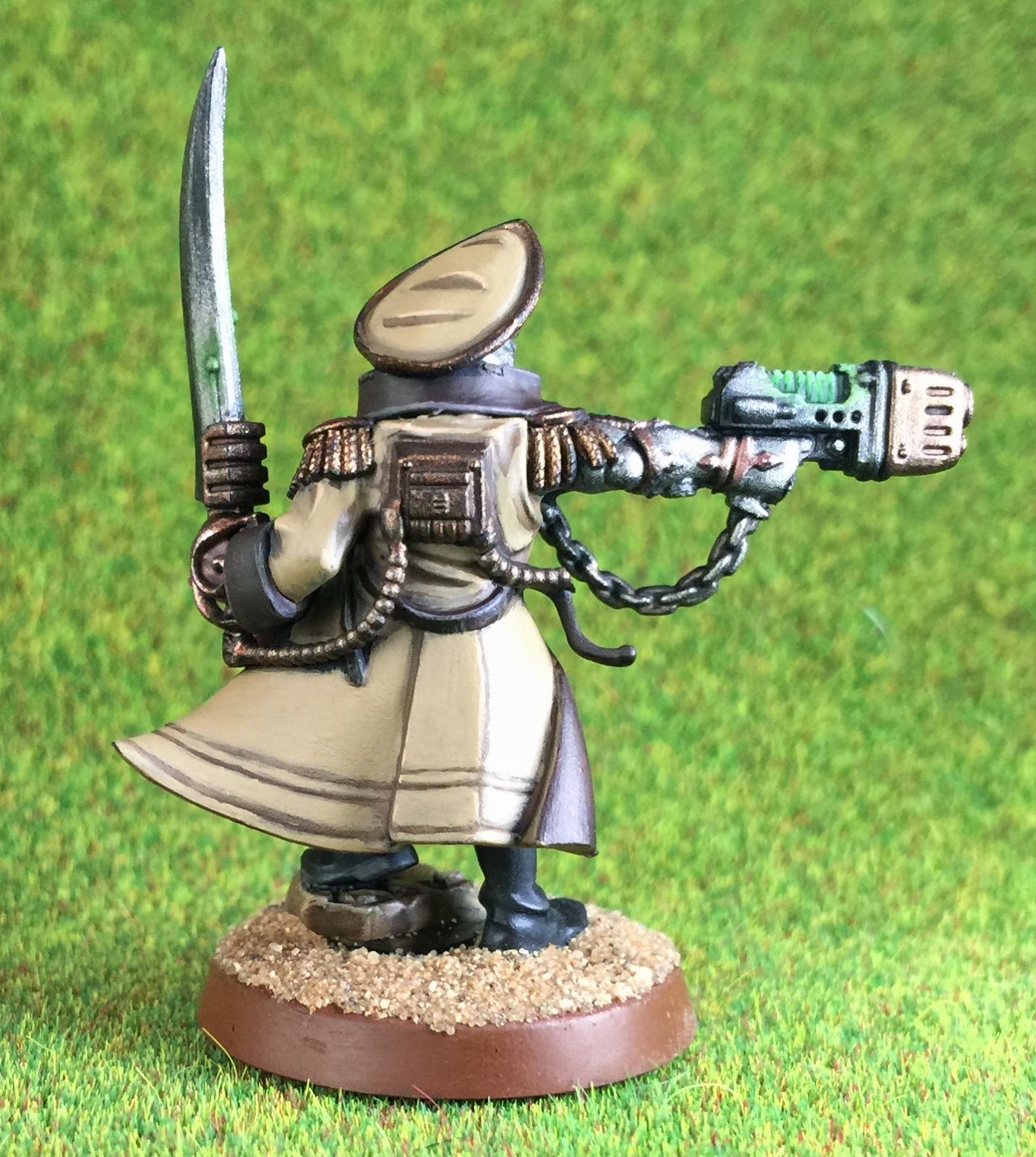 The coat was inspired by British Army WWII desert uniform, although when you see it on this mini it ends up looking like a fairly standard Cadian-type scheme. It's based around a 50:50 mix of Steel Legion Drab and Zandri Dust, moving up to to pure Zandri and then highlights of Kislev Flesh which I find works very well on top of a creamy brown like this.

Readers who know this mini well will notice that there is a power cable that stops abruptly. It should be connected to the bionic arm but this piece is very fragile and broke when it was cut from the sprue. Unfortunately it couldn't be salvaged. I would recommend a very sharp knife and a very careful hand when assembling this one. 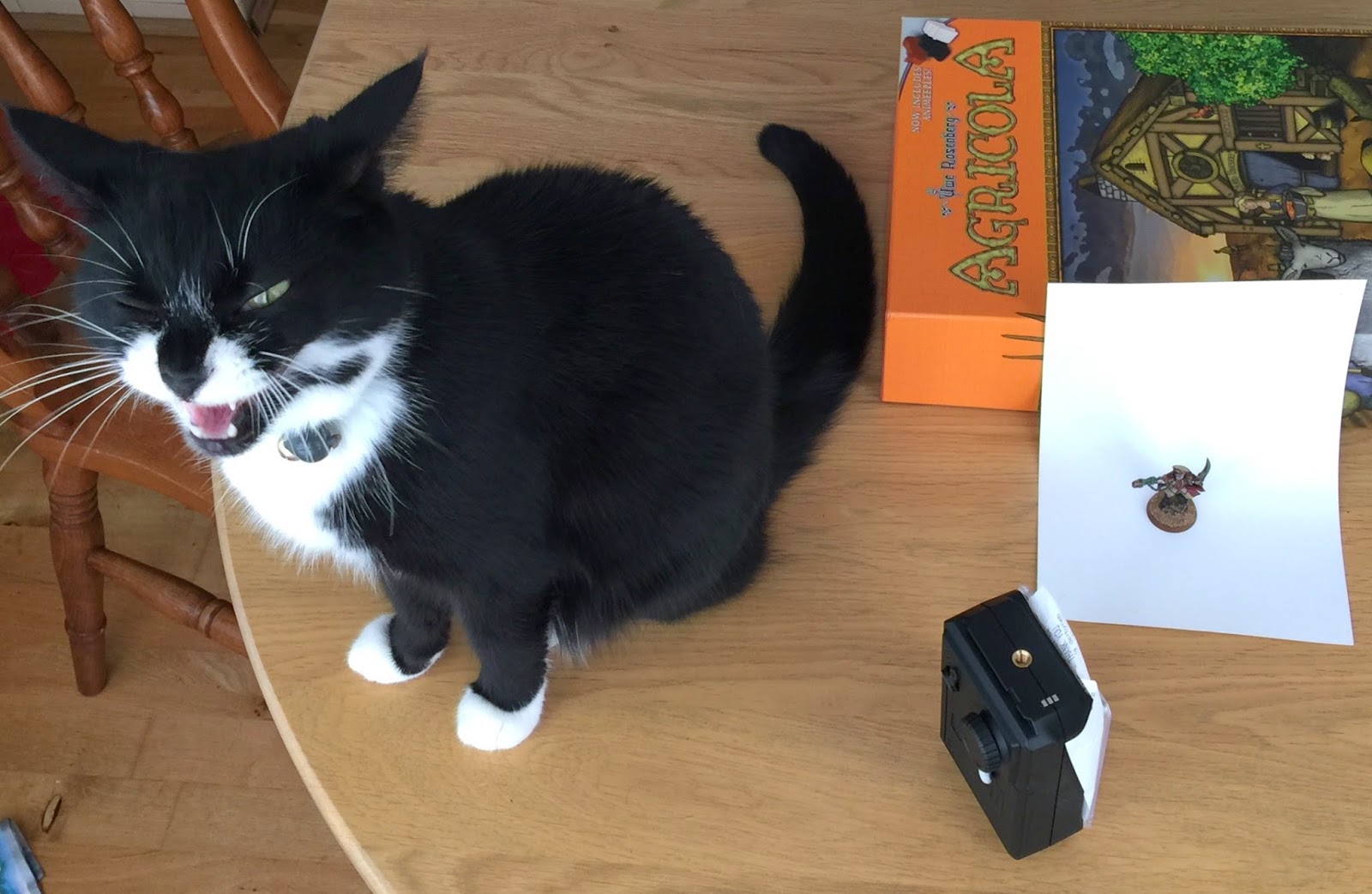 As usual 40k cat was on hand to oversee the photoshoot. Although I've photographed my last couple of minis on a white background, I couldn't get a shot of this mini that was anywhere near decent enough without reverting to the trust old green backdrop. I'm continuing to work on my photo set up and hope to back in action with the white background shots soon.