I'm building a Salamanders army using a quick and dirty technique that I picked up from miniwargaming.com via a friend. It's a great way of doing rank and file marines, and it works pretty well on HQ models too , but the big question is can it do tanks?

Because of the unusual way this technique works - putting a green wash over a model that's been partially sprayed yellow to make "automatic" highlights - the scale of the model that you are working on is massively important. Those big flat armour plates don't have much detail that the spray / wash technique can pick out, and there's also a risk that covering such a big area with a wash will lead to nasty blotches and uneven coverage.

So does it work? Well the answer is yes, just about. Here's a (mostly) finished rhino: 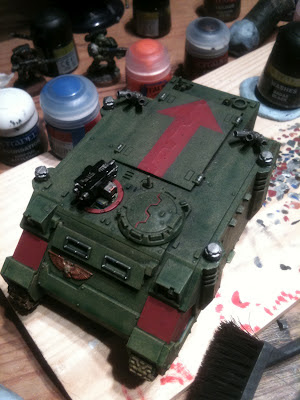 There aren't any really nice highlights brought out by the wash, but its still a really quick way to get a tank finished for the table. This tank won't win any prizes, but as its going to look great on the battlefield as part of wall of green armour. Incidentally, I know the tactical marking is facing the wrong way. This tank is magnetised and I painted the marking on without checking which way the hatch faced! Oops. 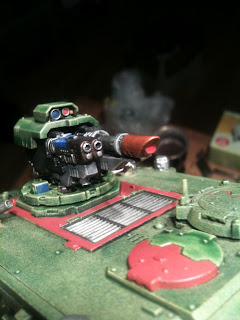 This close up shows some of limitations of this scheme... the flat top of the tank is not totally even in colour, and because the tank is magnetised, the non-default parts have to be sprayed separately. The red and green hatch has ended up being a different green, because its received a different amount of yellow spray, and it has a different texture too.

On the other hand, the weapon housing has some nice auto-highlights. Where there are enough angles and details, this technique can look good on vehicles. I think a Stormtalon might work really nicely, and I'm planning to add one to this army eventually.

By the way, here's the tutorial I used for the LasPlas conversion.

Here are couple of shots of the process being applied to rhino chassis. Firstly, here's the tank after it had its yellow spray. The uneven coat is deliberate - the variation in yellow coverage gives you the range of greens on the final model. With tanks, I find that its really important not to let flat area get a solid cover of yellow because the wash just won't stick to it. 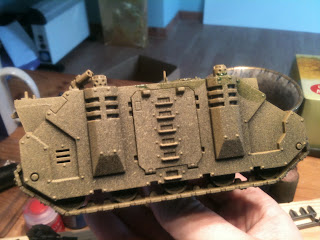 Here's the green wash going on. Next time I do this it will go on with an airbrush which should result in much more even coverage, and should overcome one of the problems in applying this technique to tanks. 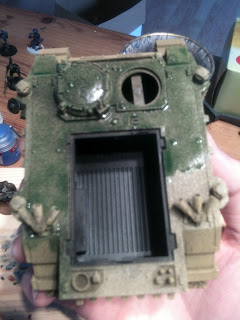 Overall, it just about works... which is good because I have another razorback, two predators and a landraider to get through before this army is finished!
Posted by Danny Kastigaunt at 12:28

Email ThisBlogThis!Share to TwitterShare to FacebookShare to Pinterest
Labels: salamanders, tanks and magnets