I spend a lot of time (and no doubt too much money) scouring eBay for old minis that I remember from my yoof. Recently I was lucky enough to find this Dreadnought in really nice condition, complete, unassembled and unpainted. 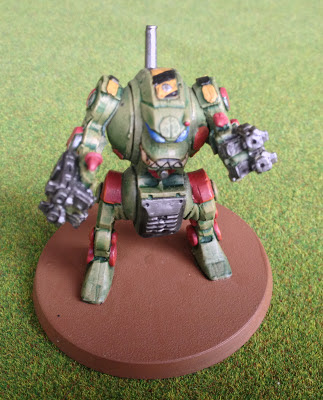 Here's the Stuff of Legends entry for this model - RT7 Dreadnought Armour. From the White Dwarf entry of the time, this particular weapon load-out is described as a "Contemptor Class Close Assault Dreadnought". For the record, its Weapon Skill and Ballistic Skill were both 6, and it could be upgraded to Initiative 6 as well! The basic model cost 201 points.

An aside about BS6 in Rogue Trader: while in theory BS6 means that you hit even on a roll of 1, the Rogue Trader rulebook states that there are no such things as automatic hits, and that a minimum dice roll of 2 is always needed to score a hit. This rule survives in WH40k 6th edition today. The reason that BS6 was worth having in the days of first edition was that modifiers were often applied to shooting. This Dreadnought was such a deadeye that we would hit on a 2+ even with -1 to hit modifier. Anyway, I digress... 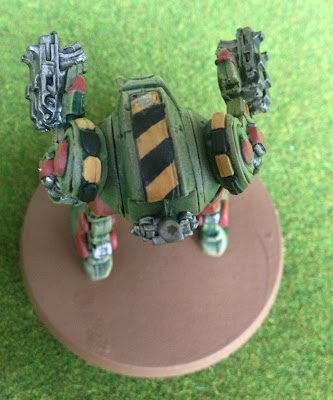 Here's a top down view. I decided that it was time to attempt some hazard stripes, especially as they were a common feature in paint jobs of the time (for example terminators often had hazard stripes on their chainfists). These were done free hand and haven't turned out too badly, but I think that I will try it with masking tape next time. 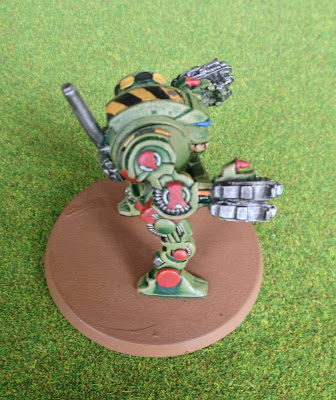 This model has been pinned to a modern standard dreadnought base so that he can be used in games. I really like getting old minis on the tabletop, although this particular one might not see too much action. He's so much smaller than the current Dreadnought design that you'd be getting quite an unfair advantage when it comes to getting cover saves etc. Also the weapons wouldn't exactly be WYSIWYG but I suppose he could pretend to be a rifleman with very compact autocannons! 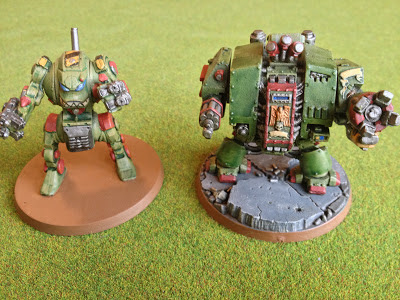 Actually this model isn't quite finished - it needs a couple of washes and to be based. I am going to base my entire Salamanders army at the same time and I still haven't decided exactly how to do it yet. This one will need to features to break up that big flat base. 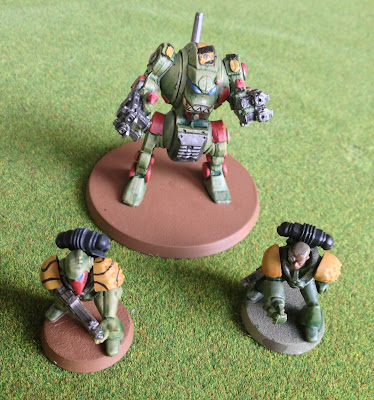 Finally here he is with a couple of his Rogue Trader era mates... The sarge with the power fist is a work in progress and he'll get his camo markings painted later today while I listen to the football.
Posted by Danny Kastigaunt at 03:32