My mate Kiarn turned up today with his Chaos Army with this as the centrepiece: 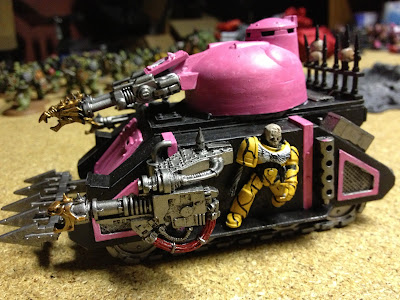 The dead Salamander on the side is a very nice touch, if a little confrontational! It's actually still a work in progress, he needs some details like the Aquila, but I wanted to put this on here immediately. I am a big fan of 1st edition era models and I love the look of the old Predators with the big Dalek-turret. The shocking pink is suitably Chaotic and overall it made a rather impressive focal point for Kiarn's Krakens.

As for the game itself the dice proved to be rather cruel to the forces of Chaos on this occasion. Kiarn failed no less than three charges of 7" or less in the final two turns, leaving his berserkers to be mown down in the centre of the table giving me a fairly comfortable lead on KPs and objectives when the game ended after turn 5. 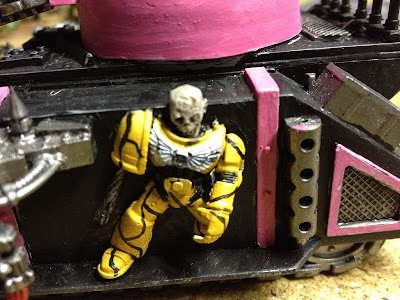 The Chaos Predator itself was a massive threat, drawing the fire of almost my entire gunline for three turns before finally succumbing to a glancing hit from an autocannon. We're planning a rematch in December which I am very much looking forward to.

Posted by Danny Kastigaunt at 10:58