This is an old second edition era Space Wolf Terminator that Poot must have had since 1990-something. After nearly twenty years, it has finally been painted. This is another one of our collaborations - Poot does the airbrushing I do the...um... brush-brushing. 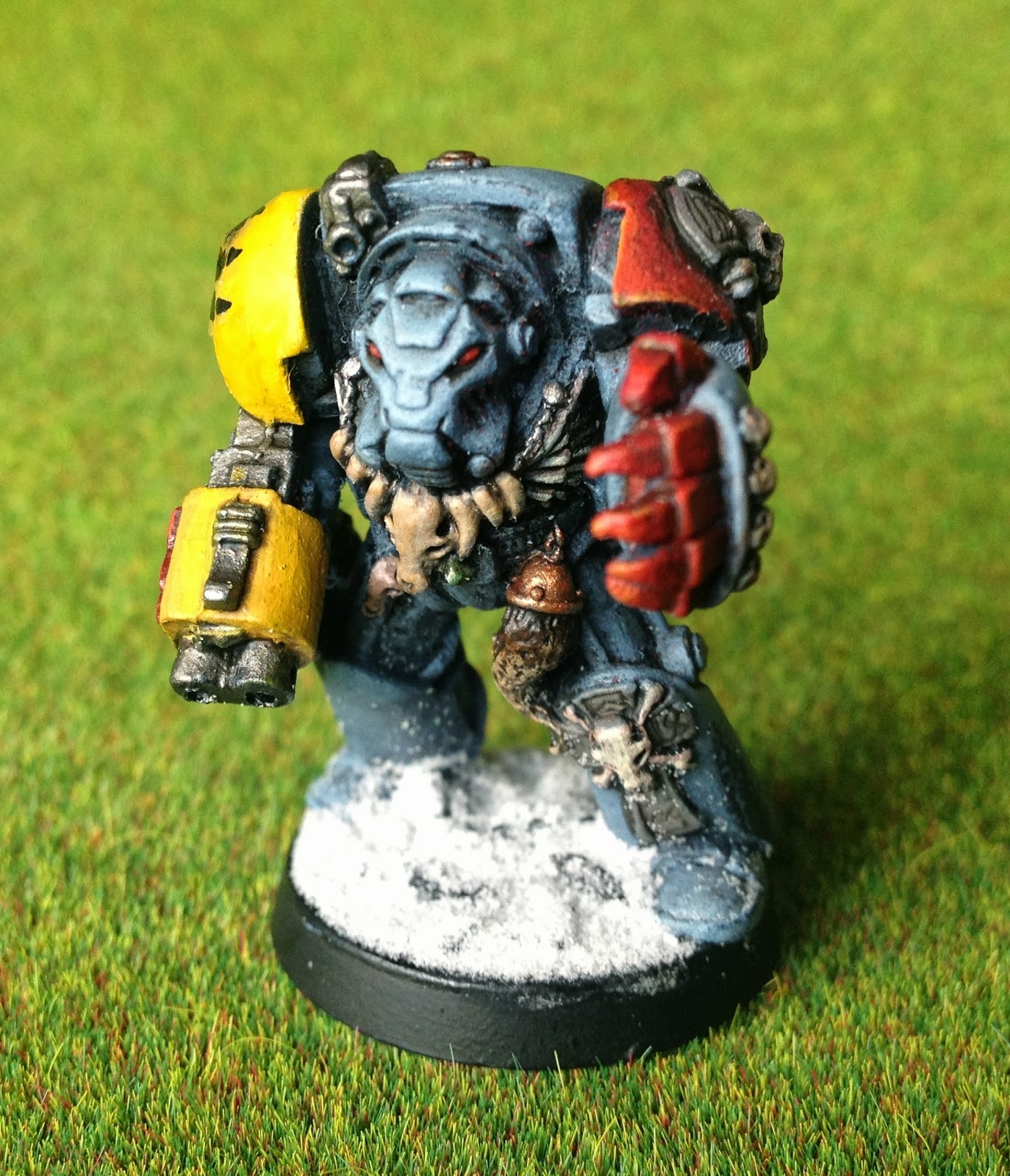 The model started with black primer, and the basecoat colour was built up like this:

Up until this point, this is a pretty standard airbrush approach, but now it's time to prepare for the oil wash. 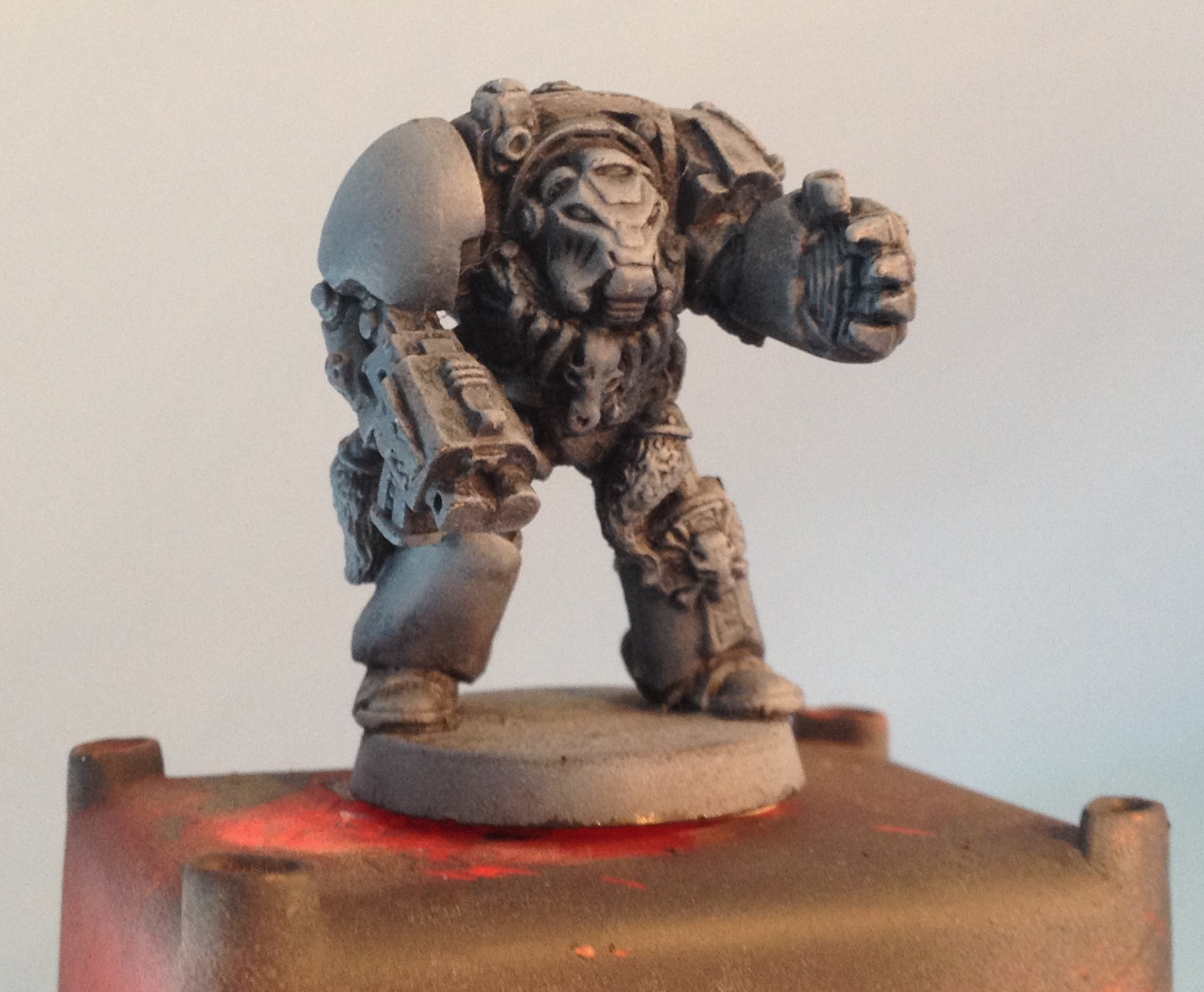 I started looking around for inspiration for old fashioned terminators, and came across this excellent scheme by  Svyatoslav "Spellscape" Karyagin. I was really impressed with the weathered look of these minis, particularly the deep and dirty red on the powerfist, so I decided to try something similar on our model. Spellscape's blog is here. 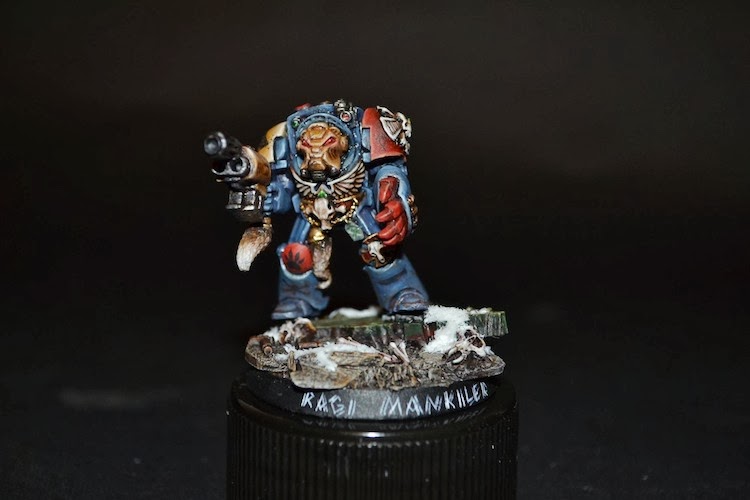 I started off by blocking out the red and yellow areas. The yellow is GW Iyanden Darksun from the old range which is my automatic choice for anything that's going to end up being any colour related to yellow. With the red, I decided to be a bit braver... My usual approach to a dirty red would be a red basecoat with a brown wash, but Spellscape's model had much more depth to the red than that. In the end, I decided to start with a brown basecoat and build up the red from there.

In the picture below you can just see that the right shoulder pad has been blocked out with GW Rhinox Hide. (If I was thinking straight I would have photographed him from the other side, but at the time I really wasn't sure that this was going to work at all!) 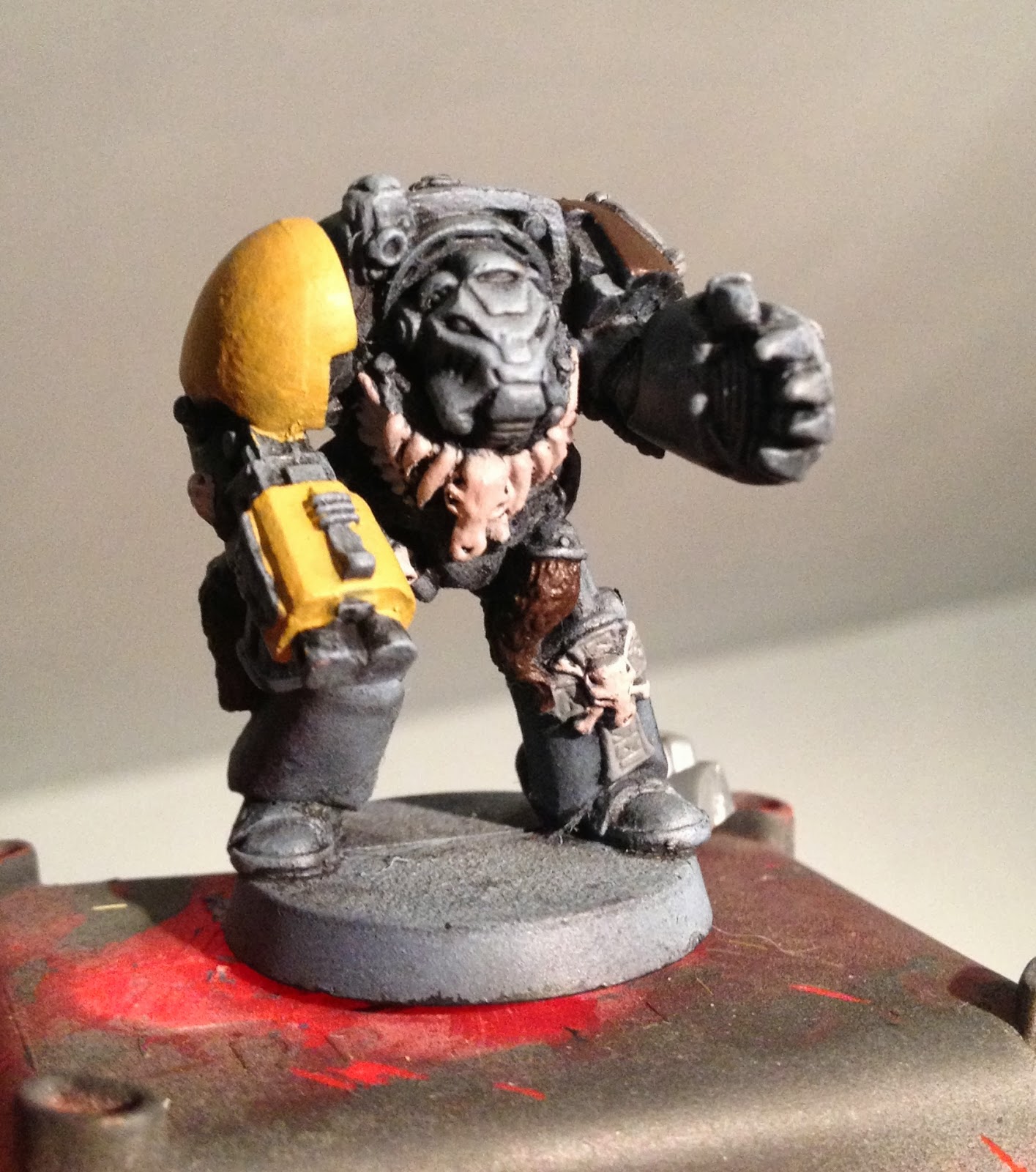 Below is the powerfist with the red pretty much finished, but before the final yellow highlight goes on. The complete recipe for the dirty red is: 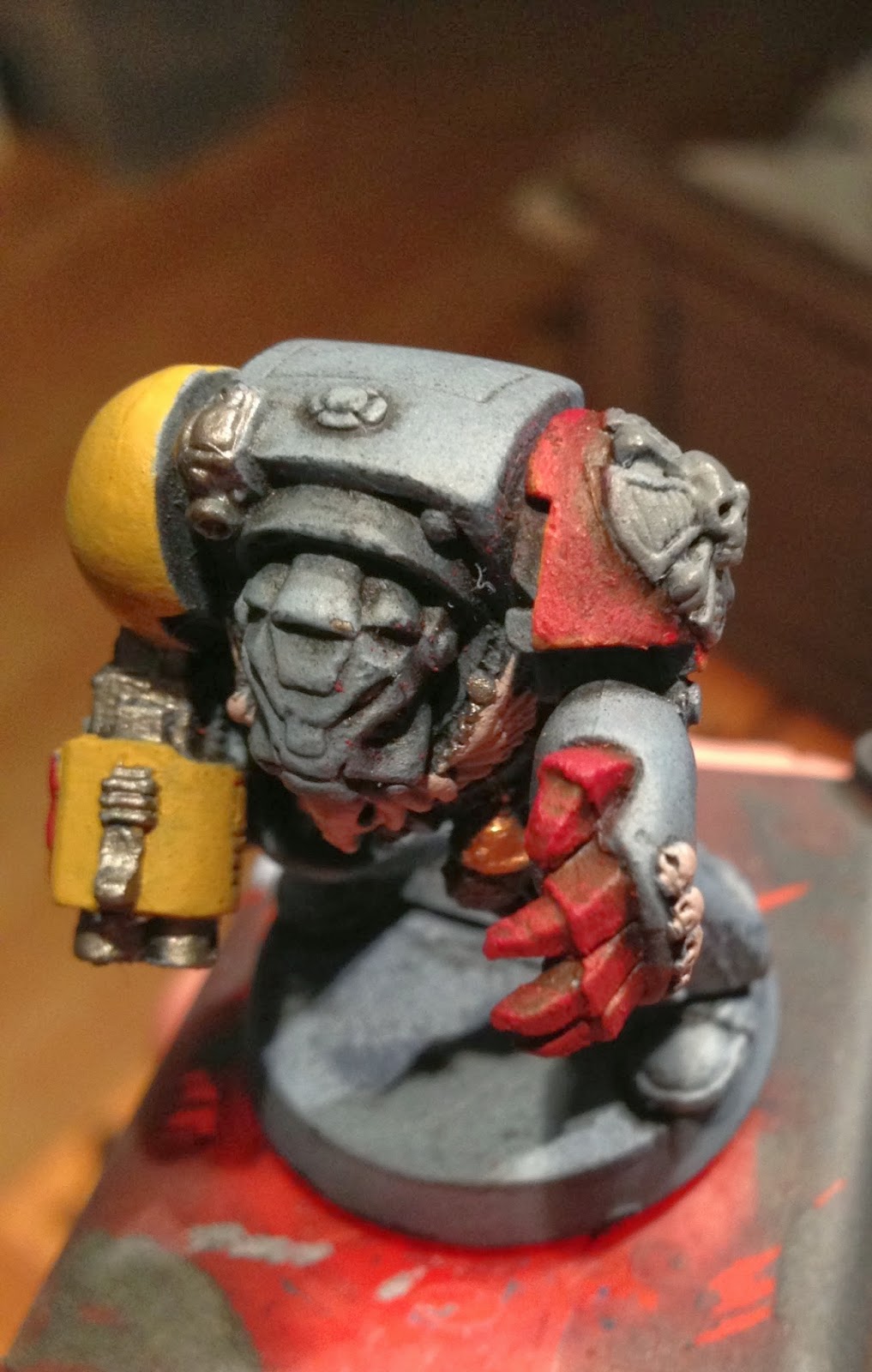 The rest of the mini has a very straightforward treatment. The stone parts get a base of VMC Neutral Grey follow by  a drybrush with GW Dheneb Stone or similar then a brown wash. The wolf skulls are bone with brown wash and some highlights / retouches. I did cheap and cheerful wolf pelts by using Rhinox Hide as a base then drybrushing GW Mournfang Brown and then GW Bleached Bone over the top, and washing the whole thing back down with, you guessed it, brown wash. 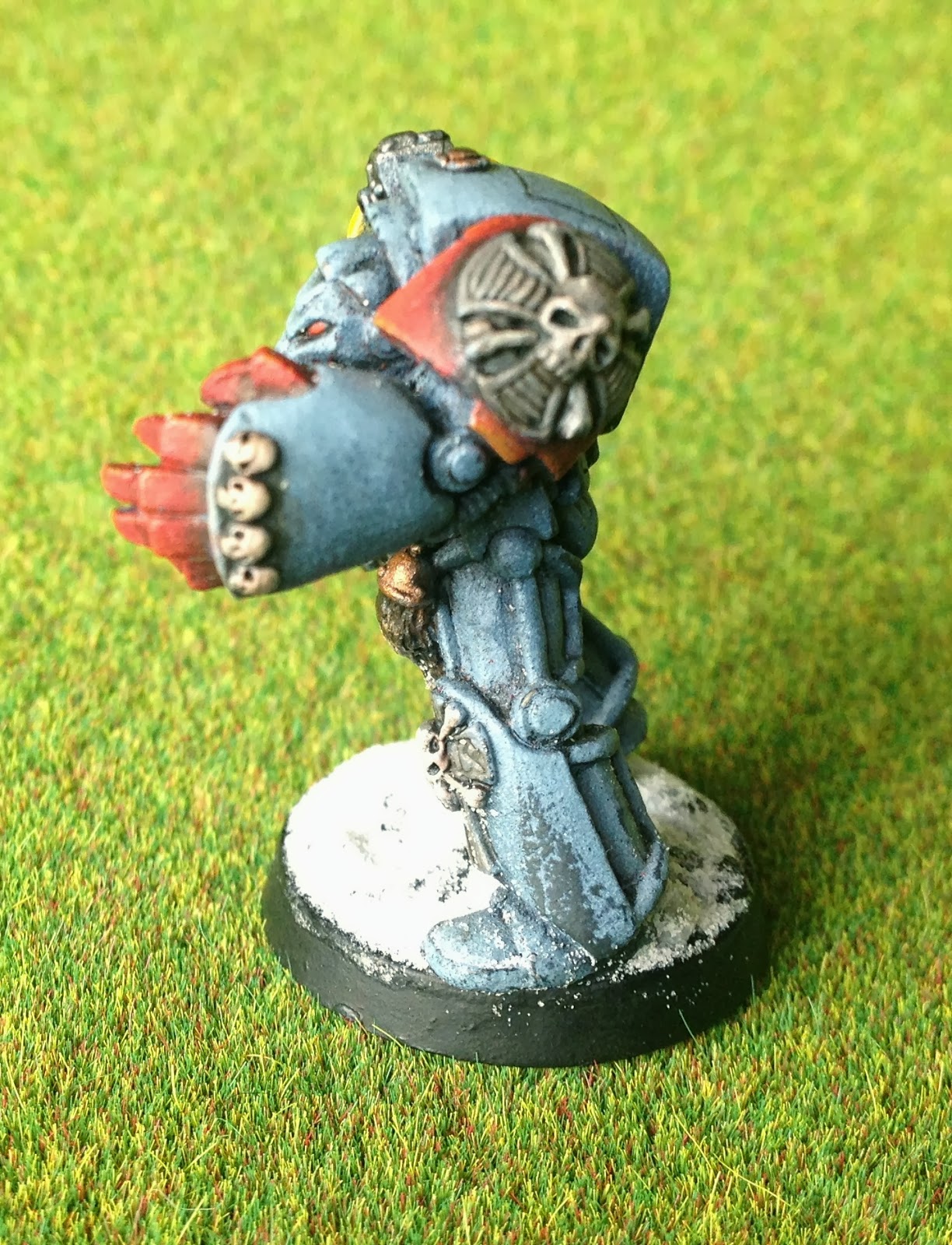 In this view you can see where the thinners gave taken off some of the blue when the oil wash was tidied up. We decided that it looked suitably natural for a weathered old Space Wolf and left, it rather then making it worse with a bad re-touch by hand. 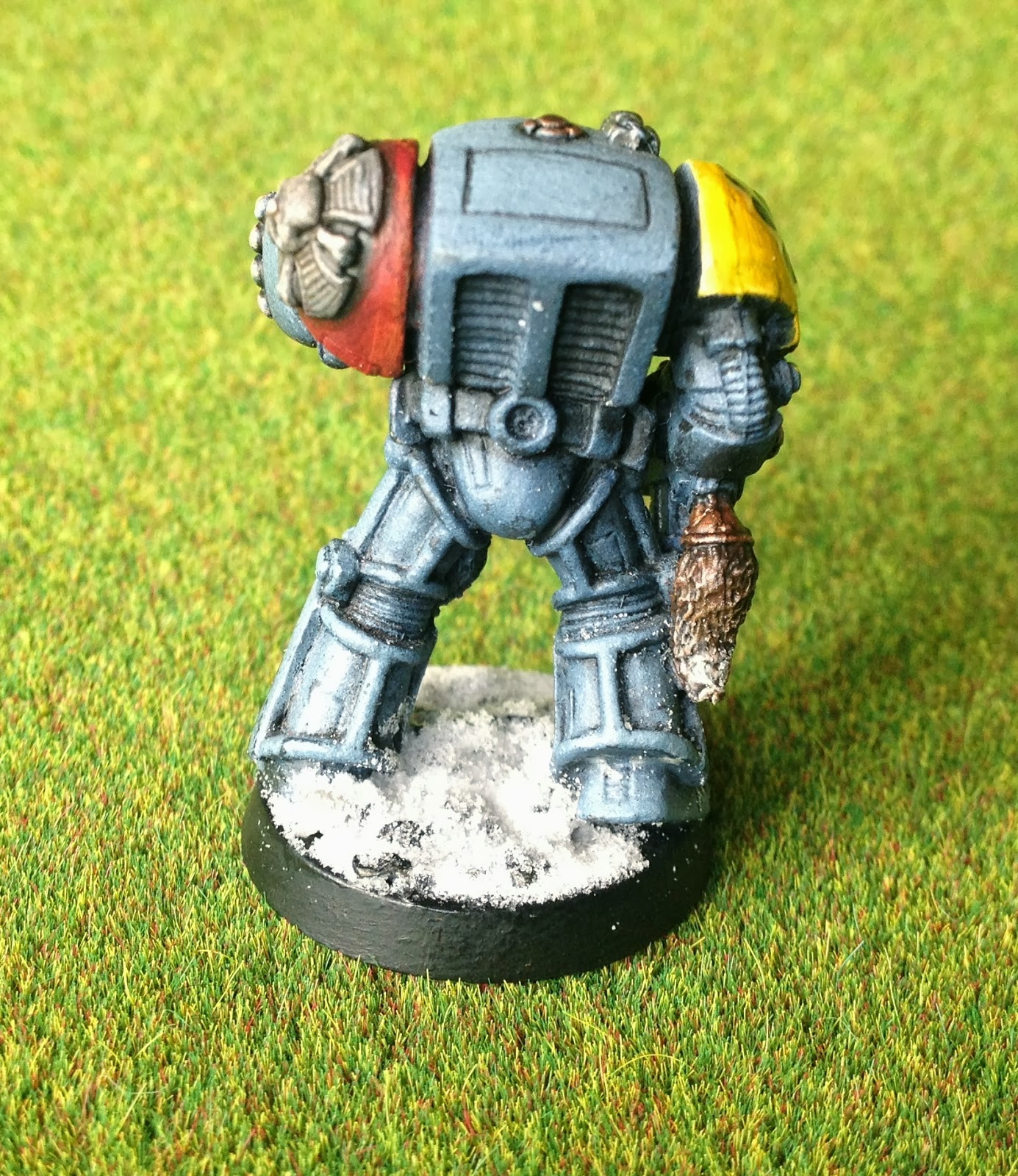 Here you can see all the work that the oil wash does down in the recesses of the armour plates, and also the layers that make up the wolf pelt. 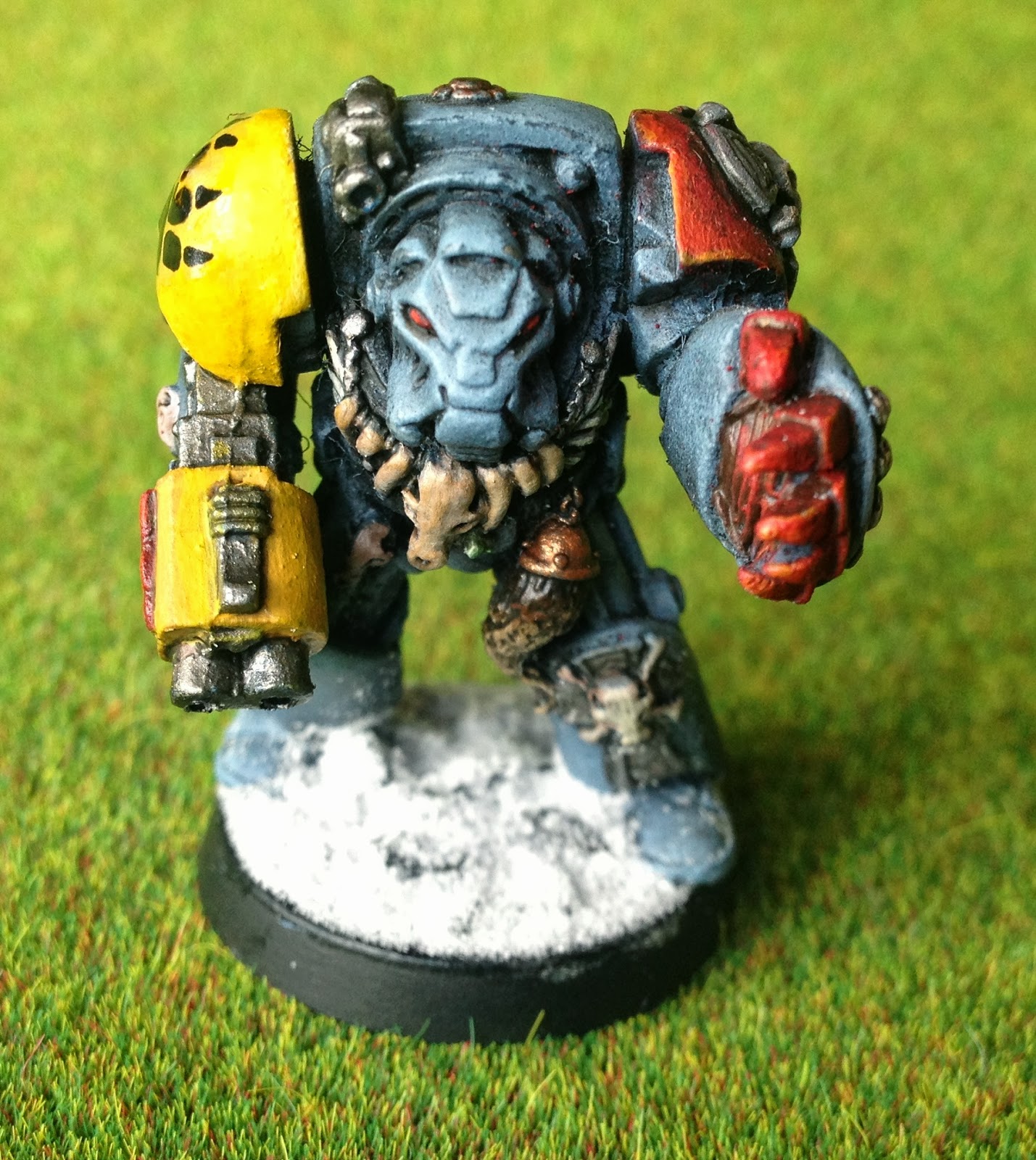 The snow base is just some slate chips stuck on with PVA, with another layer of glue on top and some bicarbonate of soda sprinkled on top. I did it about ten minutes before I took the pictures and I am not sure that it would stand up to gaming use to be honest!

Posted by Danny Kastigaunt at 12:00