I am firmly placing the blame on Relic Entertainment for my relapse into a far worse 40k addiction than I ever had when I was 13. I was mostly busy being a grown-up who still played a bit of Xbox until Relic released Space Marine in 2011.


As a game, Space Marine was a pretty average third person shooter, but as a way of reminding me how much I used to love Warhammer 40,000 it was super-effective. The orks looked perfect, and I got the chance to shoot them in the face with the full range of weapons that I used to glue onto my plastic marines in the 1990s. I even came to enjoy the over the top voice acting that they used for the orks. "Hah! Shoot me again!" became a particular favourite, and I was of course more than happy to oblige. 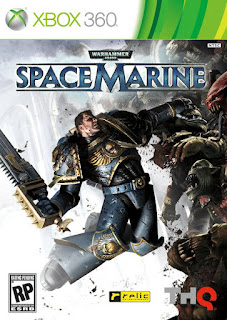 I played the game through three times and freely admitted that I was hankering after some space marine models, but swore that I'd stay strong. Eventually, I gave up and and ordered a set that included 5 space marines, a brush and some paints. I assured my friends that I had no intention of building an army or getting back into playing. I planned to paint these five marines as a bit of a novelty, put them on display somewhere and go back to playing Xbox.

It wasn't long before I'd completely succumbed and was making plans to build a marine army and get back into playing. I am now approximately half way through building a marine army that's probably going to end up coming out in the wash at about 3000 points.

The next few posts on here will cover the paint schemes and techniques etc that I've used on my marine army. Hopefully some people will find it useful or interesting, and if not, it'll form a nice project log for me.