This is another "last year's project this year" post. This is the centrepiece of my Salamander's army and I thought it was worth getting him photographed and put on here. I've been playing Tau pretty much exclusively this year, but I will certainly be giving him and the Sallies a try using sixth edition rules soon. 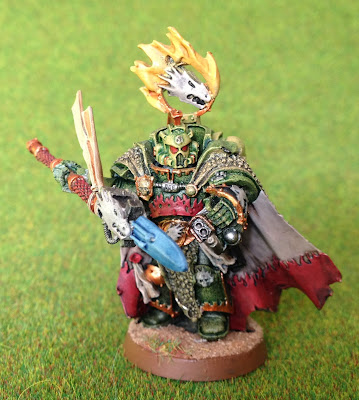 This was the first really ornate character model that I'd attempted. For a long time after I bought it, I found it quite intimidating and I spent quite a while coming up with excuses not to start it. 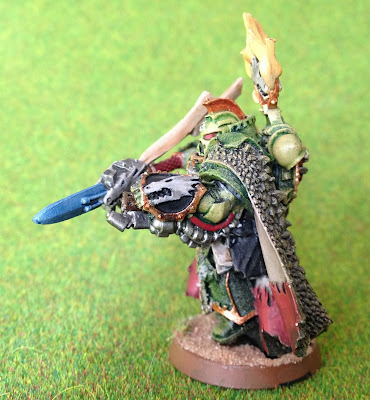 This example is white metal so his spear is rather delicate for gaming use, but he's not done too badly for table-wear. Just after I finished this one I was given a finecast one which I think will become another airbrush project when we get round to it. 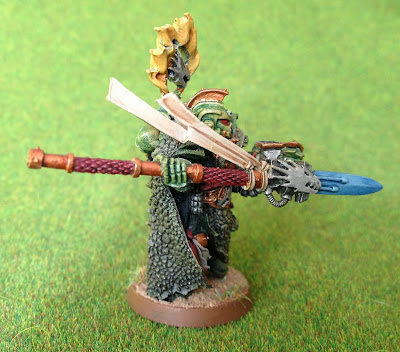 According to the fluff his spear is supposed to be hot, but I wasn't sure how to represent that on the model so I chickened out and just used a very simple recipe for power weapons - GW Astronomican Grey (old range) with a blue wash. If I was doing this model again I'd paint the spear tip like I did the power sword on my vintage Ultramarines Captain. 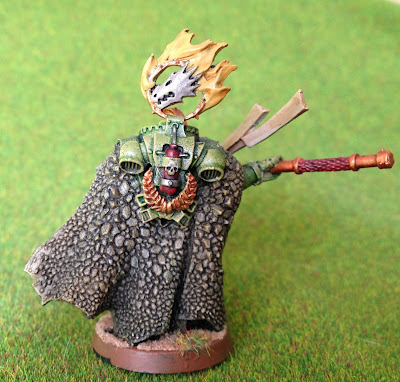 I cheated with the cape. All my Salamanders are painted using a green wash over a dusting of yellow spray primer. For the cape, all I did was switch the green wash for a brown one, and the wash did all the work for me. If I was doing it again I would paint it  properly, but this was a really quick way to get him looking nice for the table without hours of highlighting and correcting mistakes.

In the game, Vulkan is a pretty solid HQ choice. He's pretty nasty in close combat, and the twin linked meltas and multi-meltas that he unlocks are a nice focus for list-building. Unless I've missed something in the new marine codex, one problem that he does have is only having an AP3 weapon in close combat... This is a pain in challenges against characters in terminator armour, especially as a stray powerfist hit that gets through his 3++ is enough to finish him off in one go. Mustn't complain too much though - he's been rock solid for me in many a game.
Posted by Danny Kastigaunt at 18:00