One my New Year's resolutions at the start of 2014 was to paint some non-Games Workshop models. I would not be into modelling if it wasn't for GW, and the vast majority of my hobby time is spent on their minis, but there are so many interesting models out there made by independent companies and I wanted to make sure that I wasn't missing out completely. 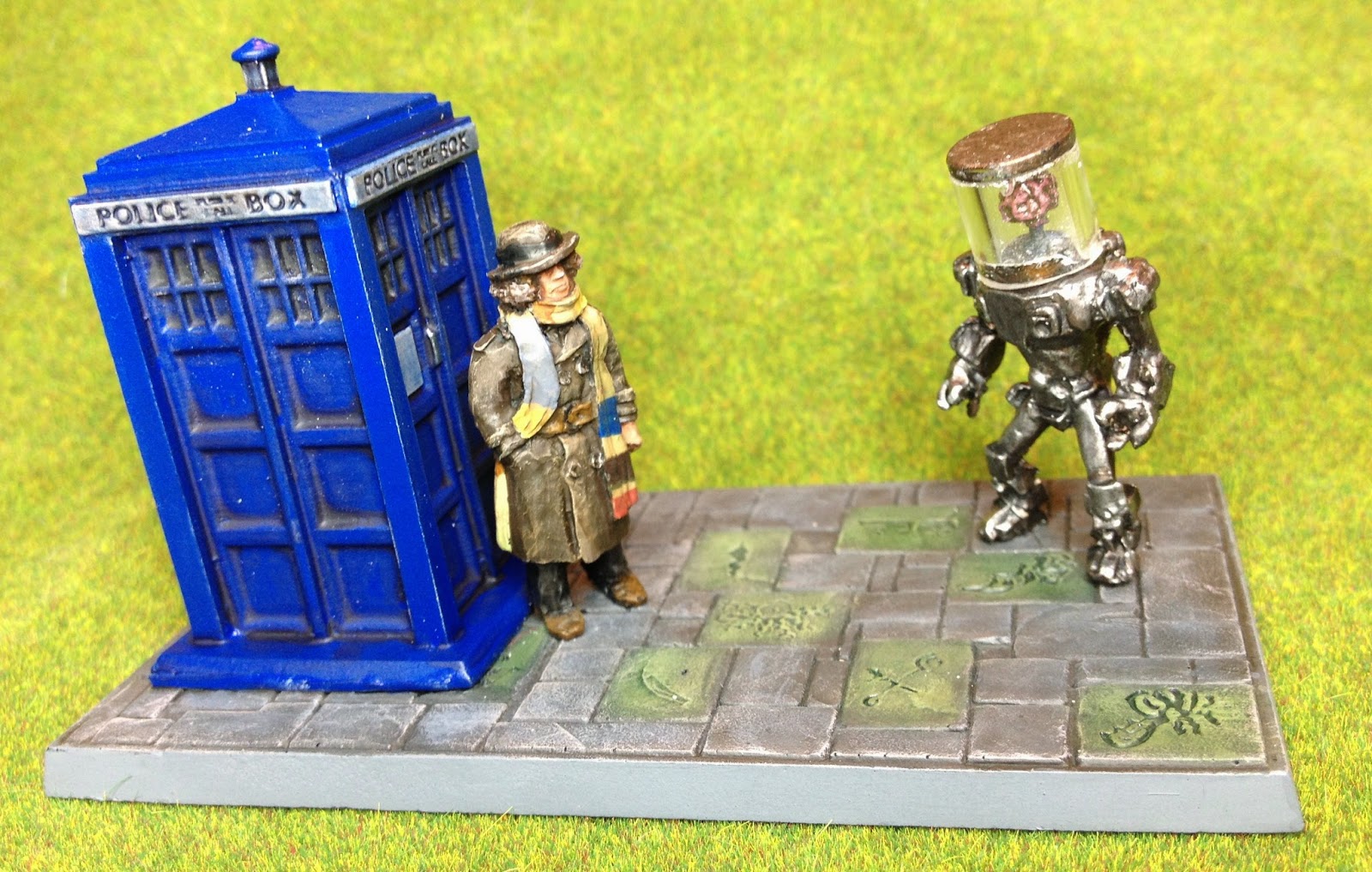 Brain of Morbius is a four part Dr Who story from 1976 starring Tom Baker. I wasn't born when this episode was made but it remains one of my brother's favourite science fiction stories of all time, and I was very impressed when we watched in on VHS. After coming across some suitable minis during an eBay trawl over Christmas I decided that a Brain of Morbius diorama would be a fun project that would fulfil my ambition of working on some independently produced minis. It would also look very cool on my brothers bookshelf with some of the other nerdy things that he was collected or been given over the years! 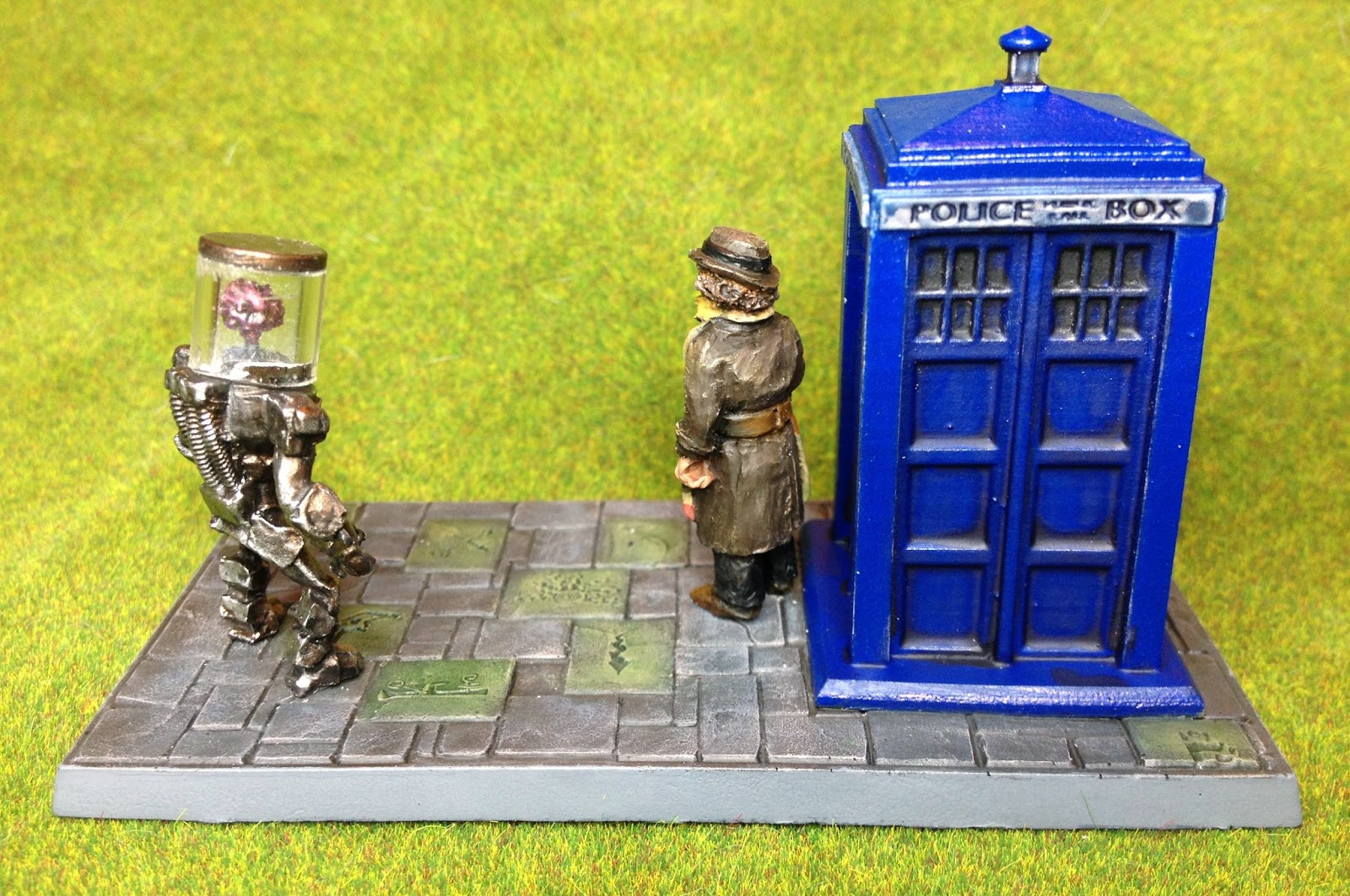 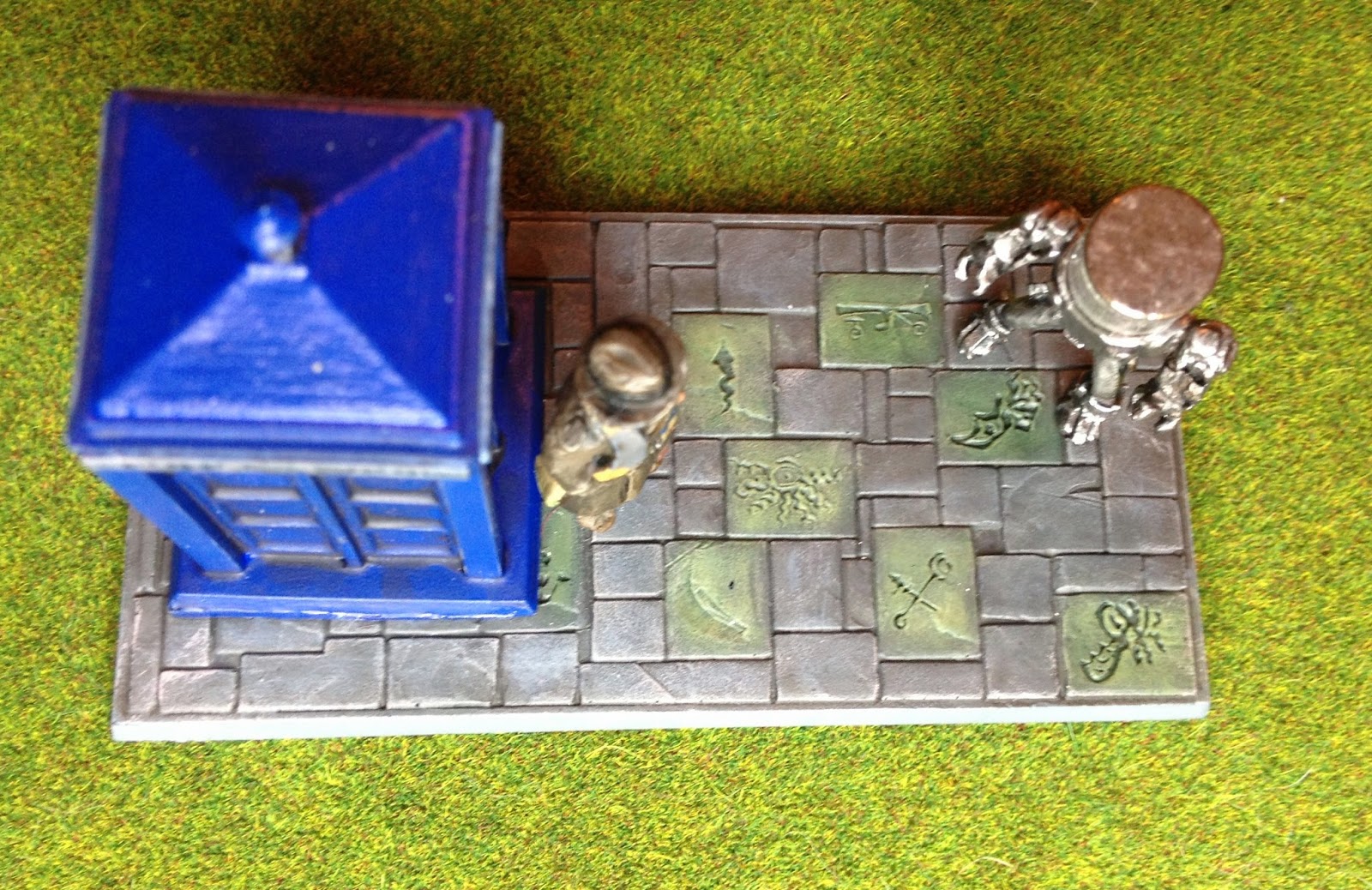 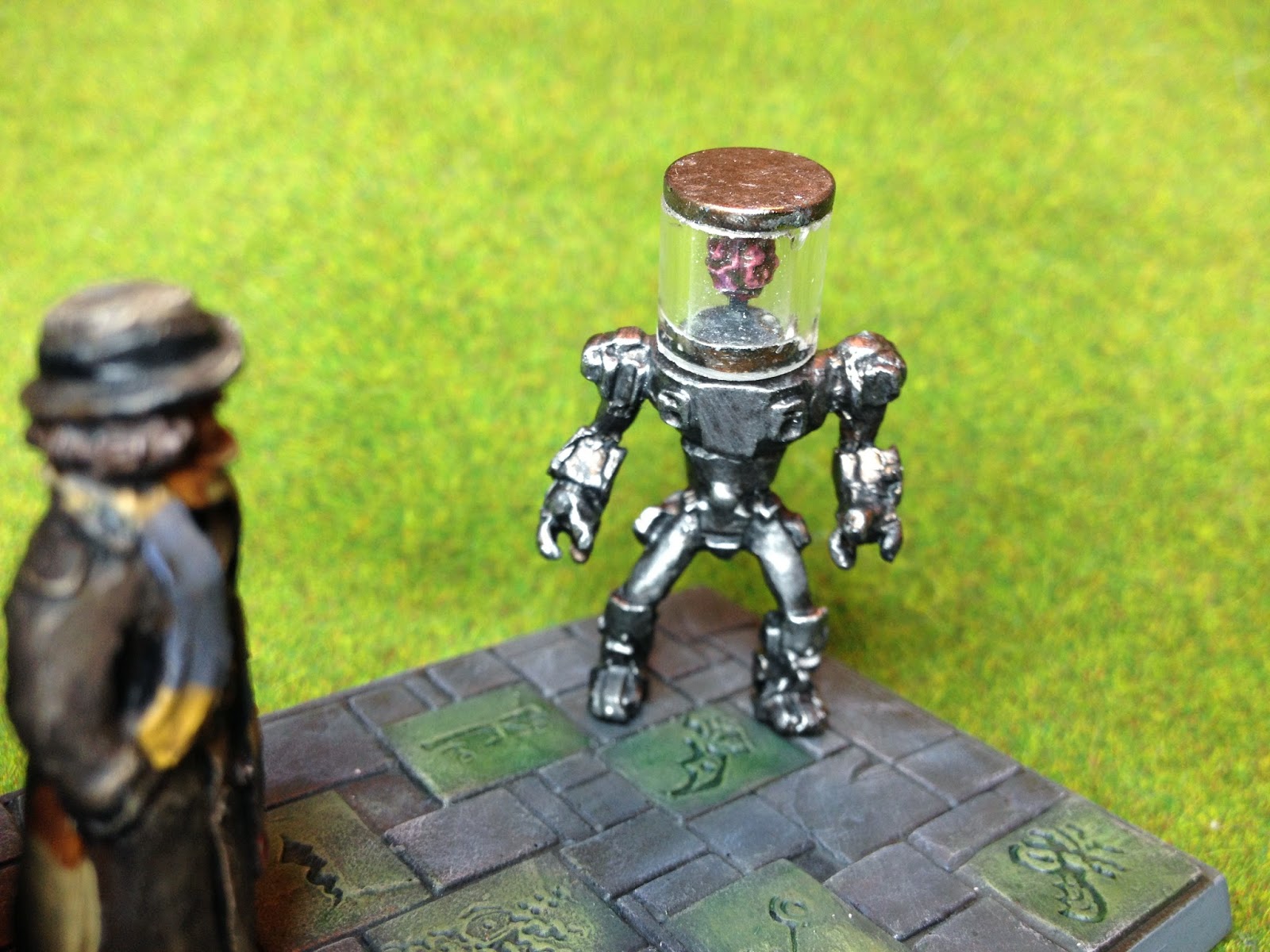 Below is some information about the models that make up the scene, and the steps I followed to paint them.

Yeoman Miniatures 28mm Police Box.
See their blog at http://yeomanmodels.blogspot.co.uk/ They also make police boxes in different scales, including ones cast half and half with clear resin and standard resin so they look they are re-materialising in front of your eyes. 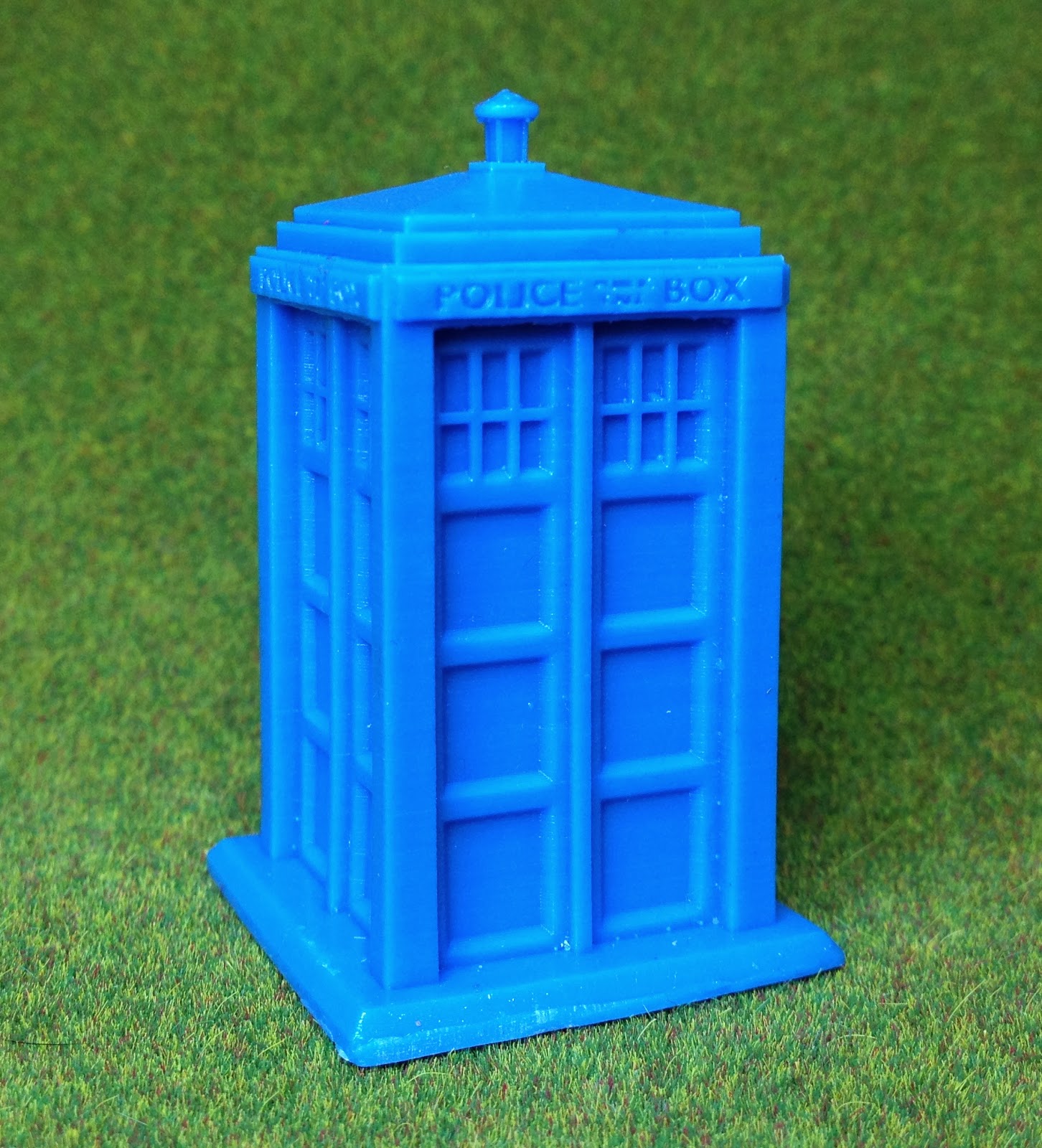 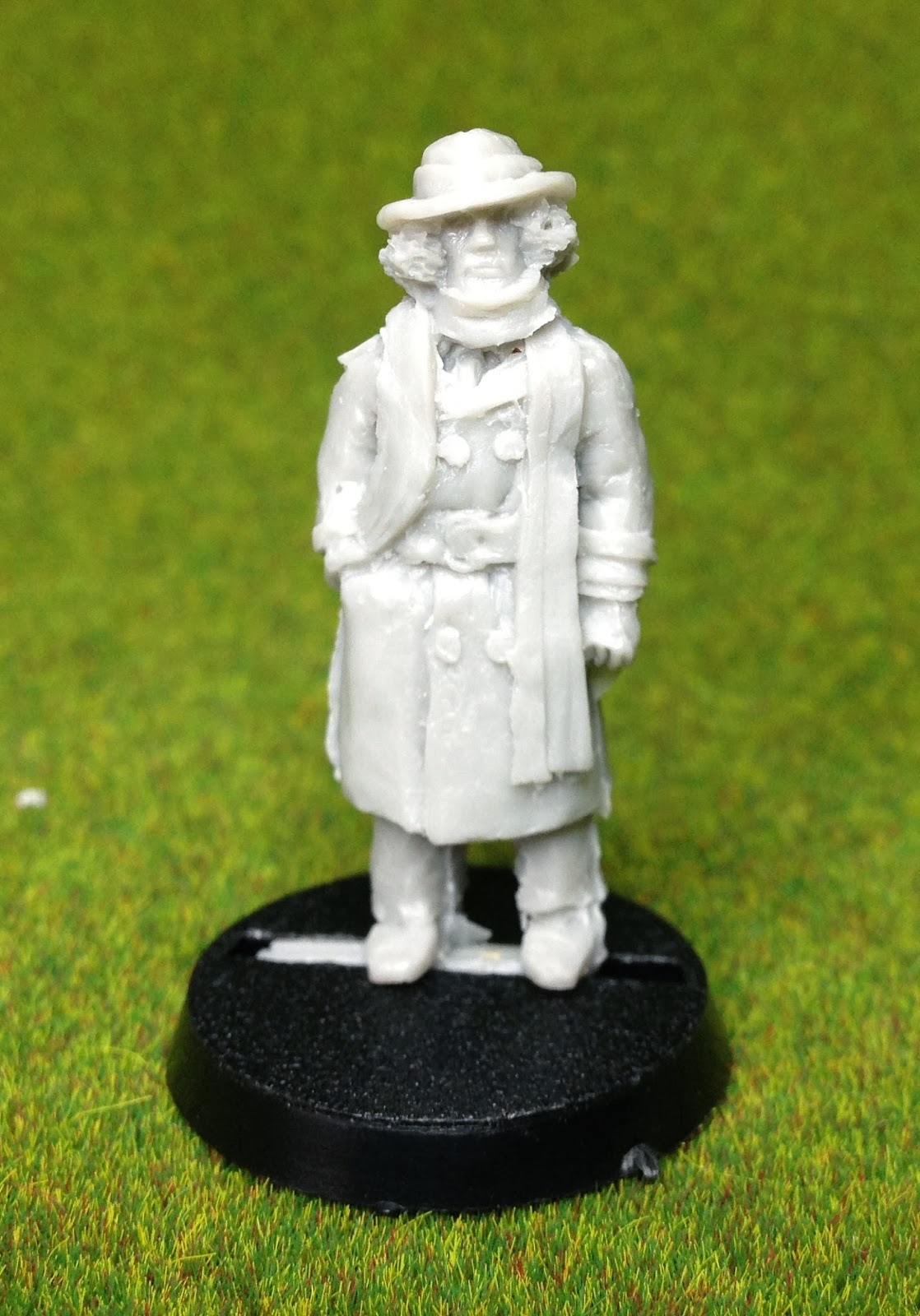 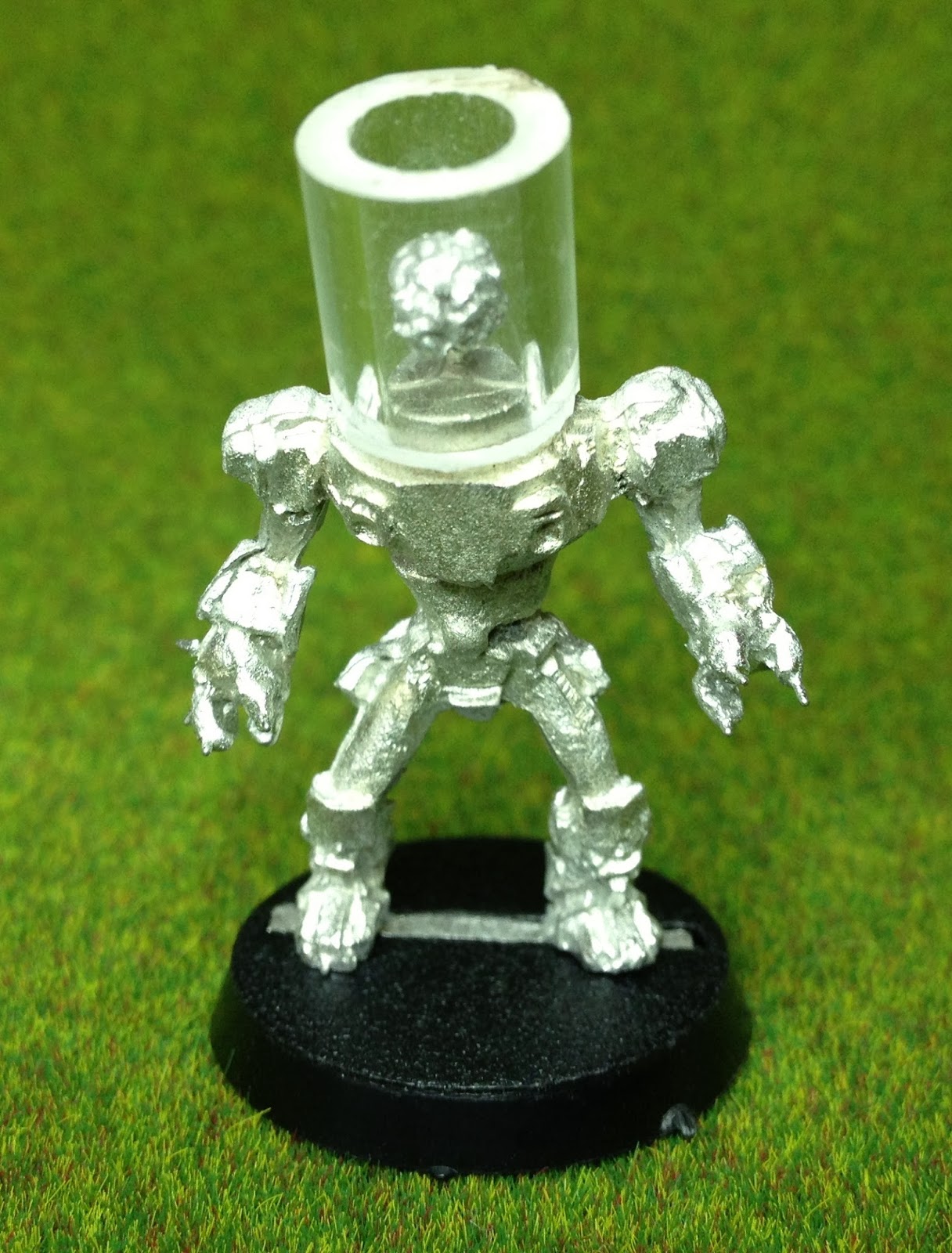 The three resin components  got a quick bath in soapy water to remove any leftover release agent. Although this diorama wouldn't need to stand up to play-wear, I decided that it was still worth dropping a pin or two into the bottom of each mini to give the superglue a helping hand. A drop of red paint on each pin was used to mark where the base would need to drilled. 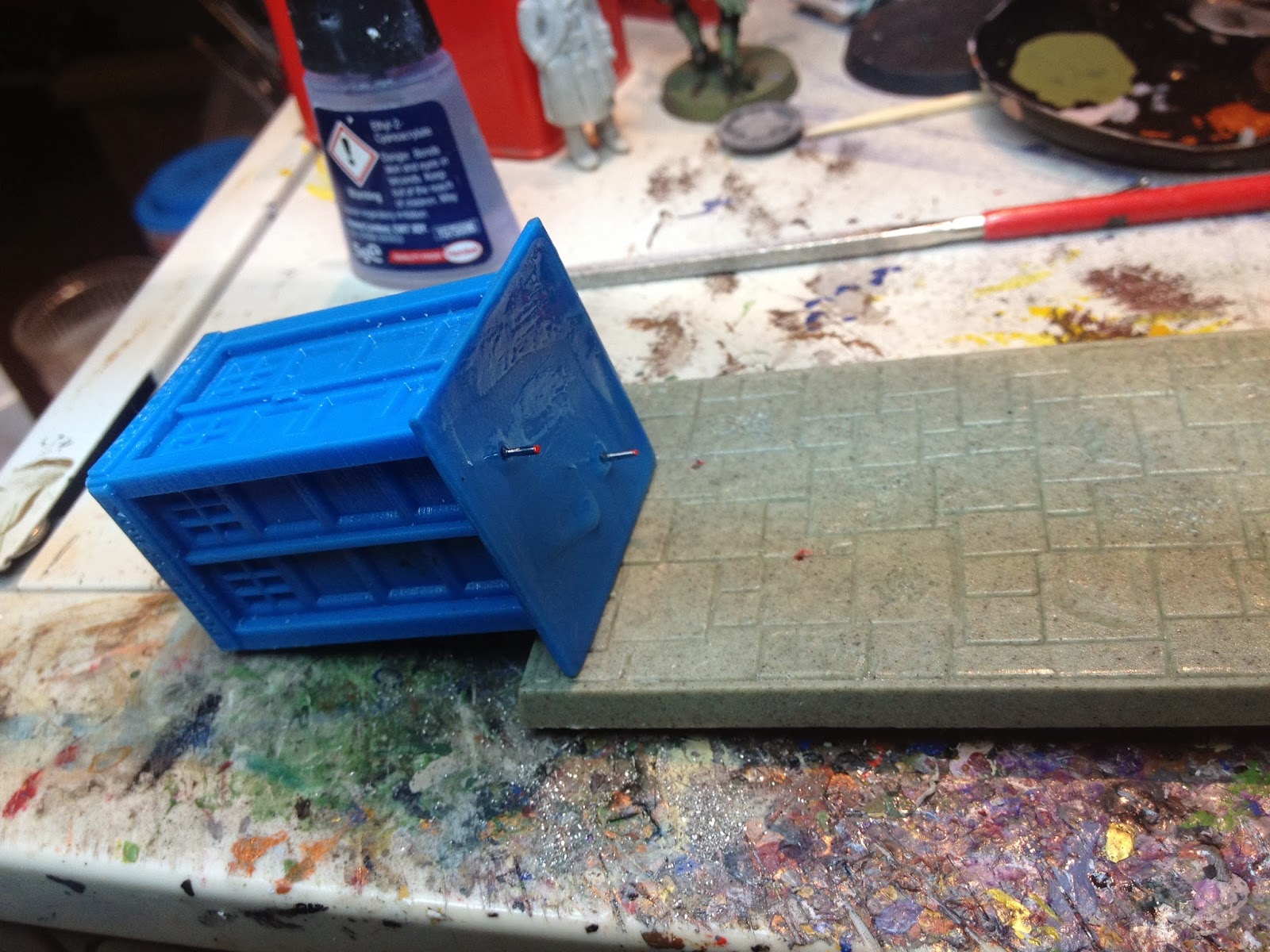 The Doctor and Morbius had their tabs sawn off and replaced with a pin because this would make mounting them in the base far easier than cutting out great big troughs to accommodate the slots. This also meant that they could live on a cork during the painting stage. 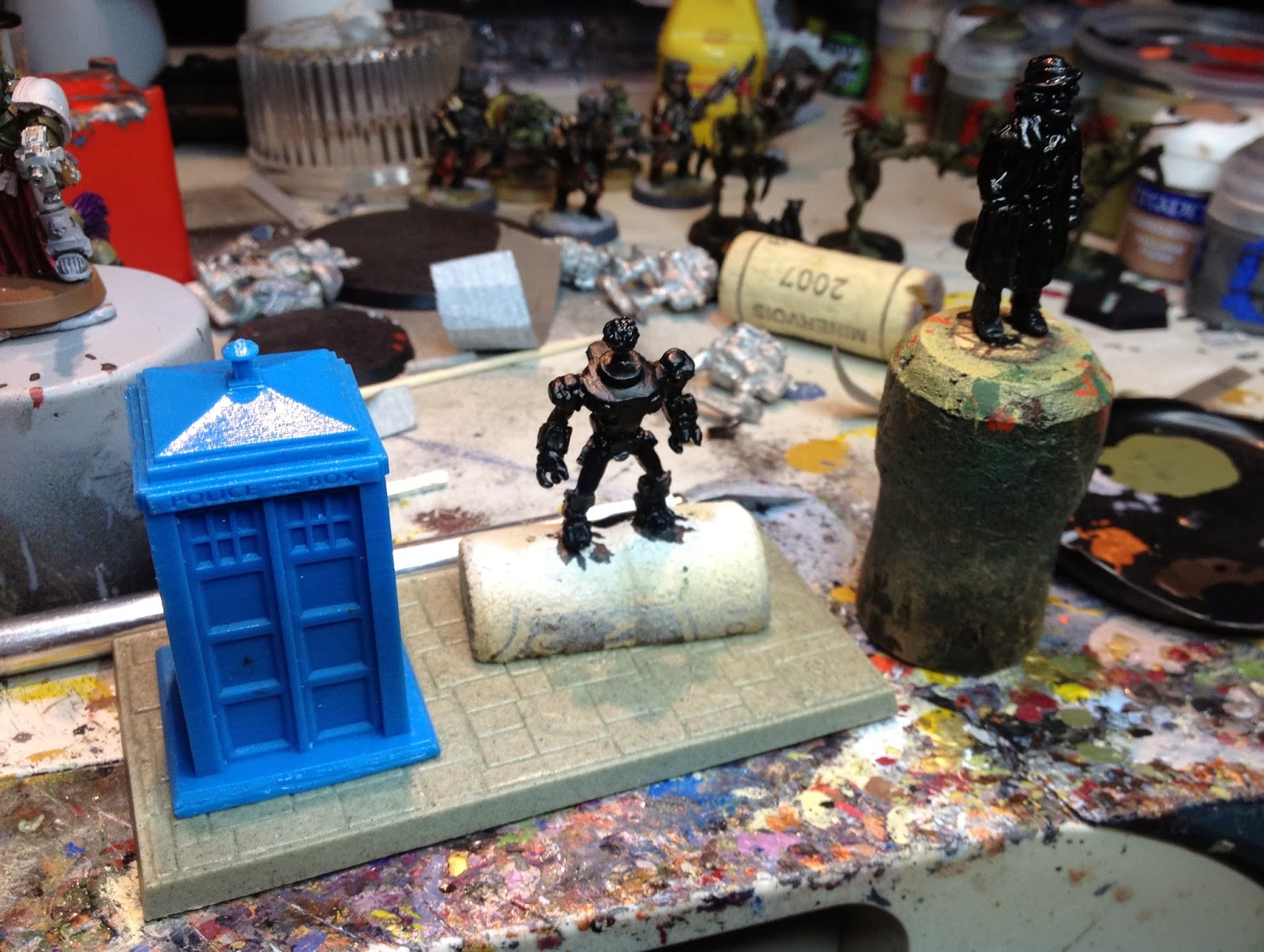 The Tardis and Base
The Tardis was glued onto the base at this stage, and the whole lot got a solid black undercoat. Usually I would recommend proper primer, but all I had to hand was Citadel Chaos Black spray which worked fine. The first painting step was a nice solid basecoat - Vallejo Heay Blue for the Tardis, and Adeptus Battlegrey from the old Games Workshop paint range for the base . 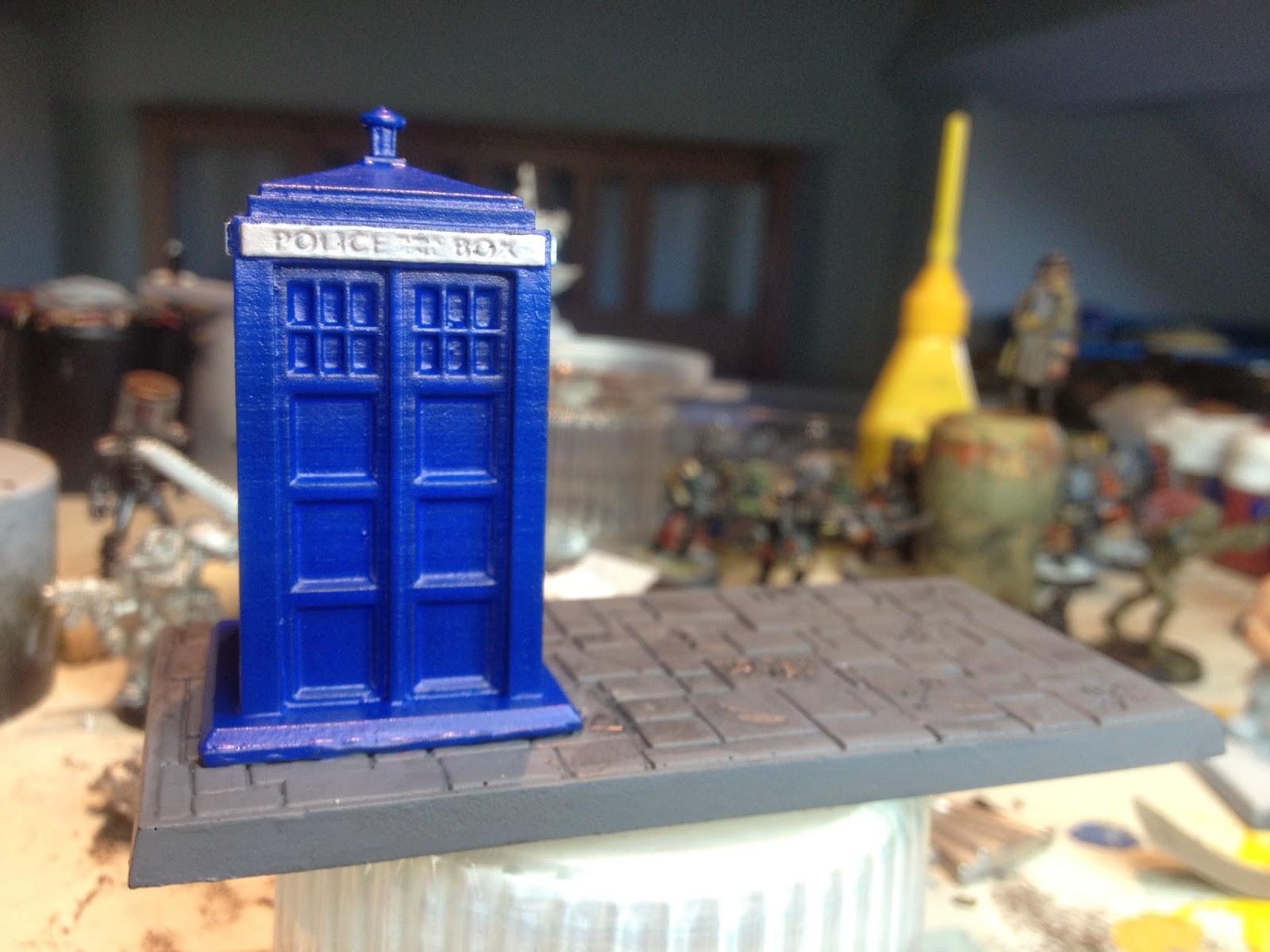 I painted the "Police Box" sign with an off-white. Dr Who aficionados will know the the writing should be white on a dark background, but because the text was recessed on this cast that would be very tricky to achieve, so I used my artistic license. Next the Tardis gets a blue wash all over to add some depth, before being retouched with the base colour again. The base gets a similar treatment, but with a brown wash. 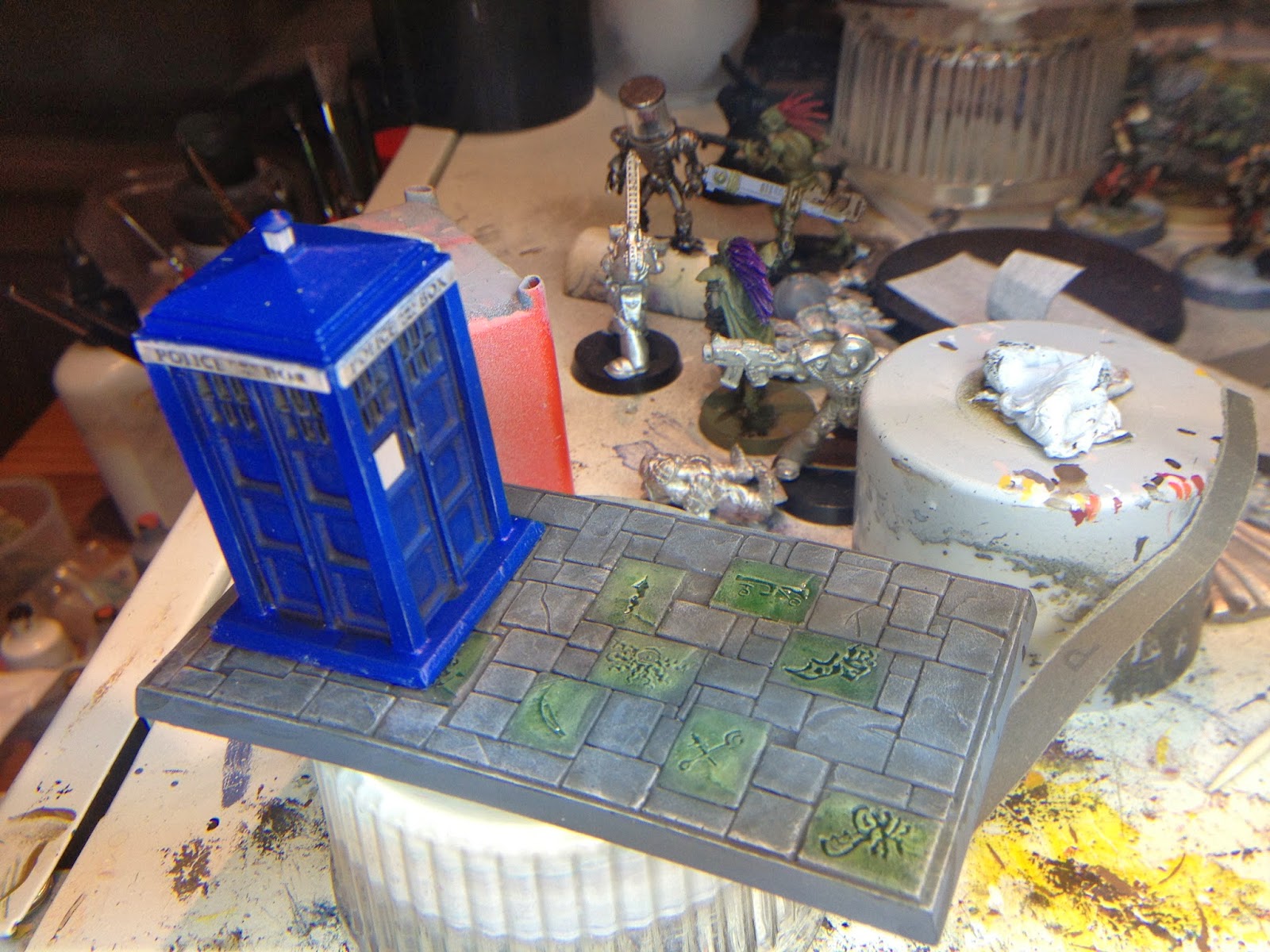 I got the idea for the green slabs from the website of the company that sold me the base. The example on there had a really clever mix of different slab colours, including one or two green ones with the mysterious markings on them. You can see it here. I decided that my base would have an nod to this excellent scheme, so I used Citadel Straken Green, Orgyn Camo and then some green wash. Finally, the entire base gets a drybrush with an off-white to add some quick and easy highlights to the slabs.

The Doctor
For the Doctor I decided to work from a Rhinox Hide basecoat. This is from the new(ish) Games Workshop range, and is comparable to something like Burnt Umber in other ranges. It is a really nice one to work from because such a wide range of colours can go over it nicely including reds and flesh tones so I though that it would be perfect for Tom Baker's version of the Doctor. With humanoid models I like to start from the flesh and work outwards, and this model was no different. The scarf was the trickiest bit with this paint job, and I don't think that I got the palette quite right, but I think it is nevertheless recognisable as the Doctor's scarf. 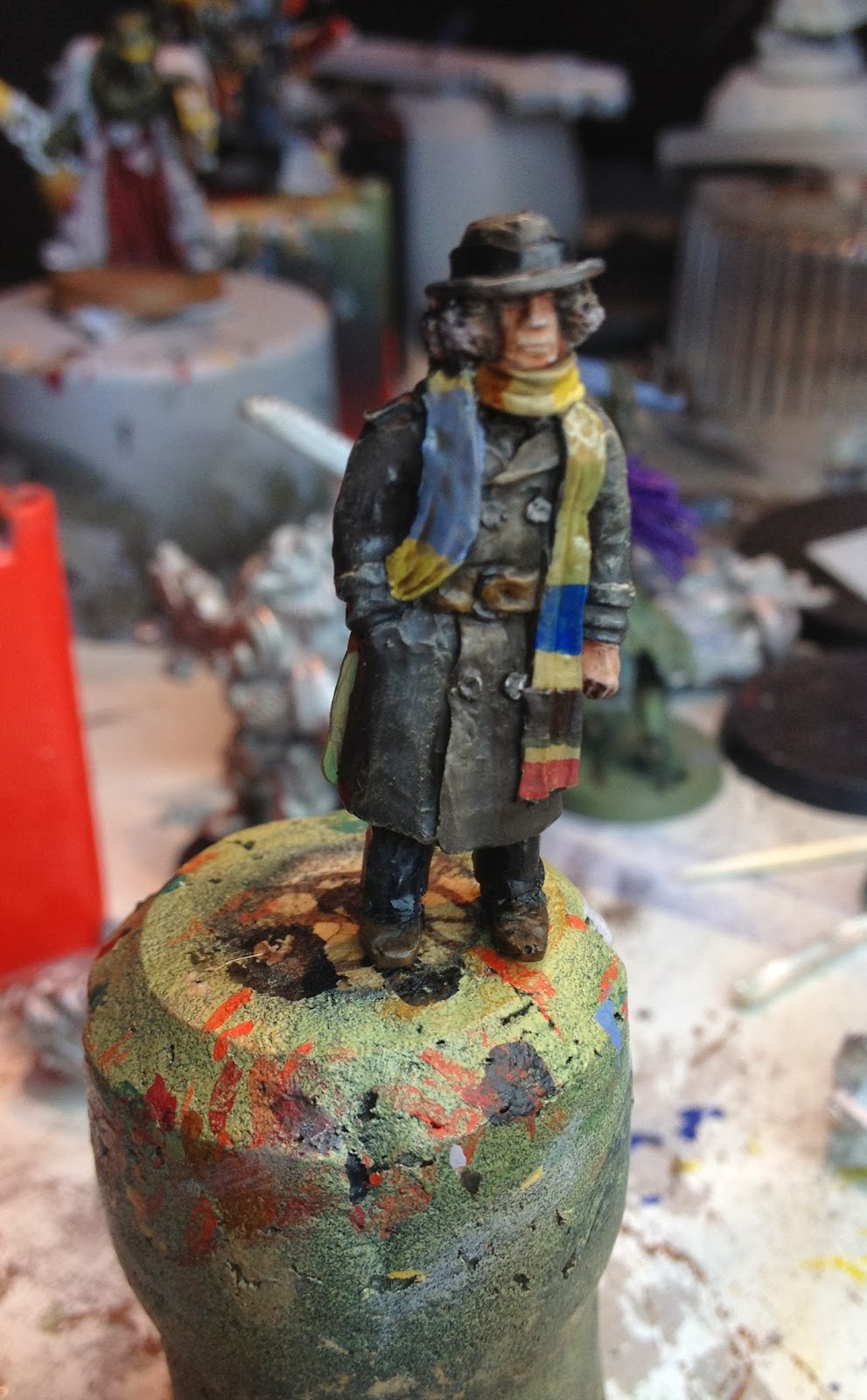 Morbius
My Morbius mini isn't intended to look exactly like character from the episode, which has a coat a bit like a bear and crab claw. I didn't fancy the conversion work required, and I thought that the brain in jar was perfectly good to invoke the spirit of Morbius. I started him off with a Tin Bitz base coat, again from the old Games Workshop range. This is a really nice dark metallic basecoat that can be worked upwards towards brassy colours, gold, or a tired-looking gunmetal which was my aim in this case. The brain started with a red basecoat and then got purple and pink drybrushes before being finished off with a green glaze for a suitably horrific look. One thing that I underestimated was how dark this mini would end up being - for example the brain loses a lot of its colour from being viewed through the perspex tube. Overall though I am rather pleased with this little mini which was quick to paint a lots of fun. 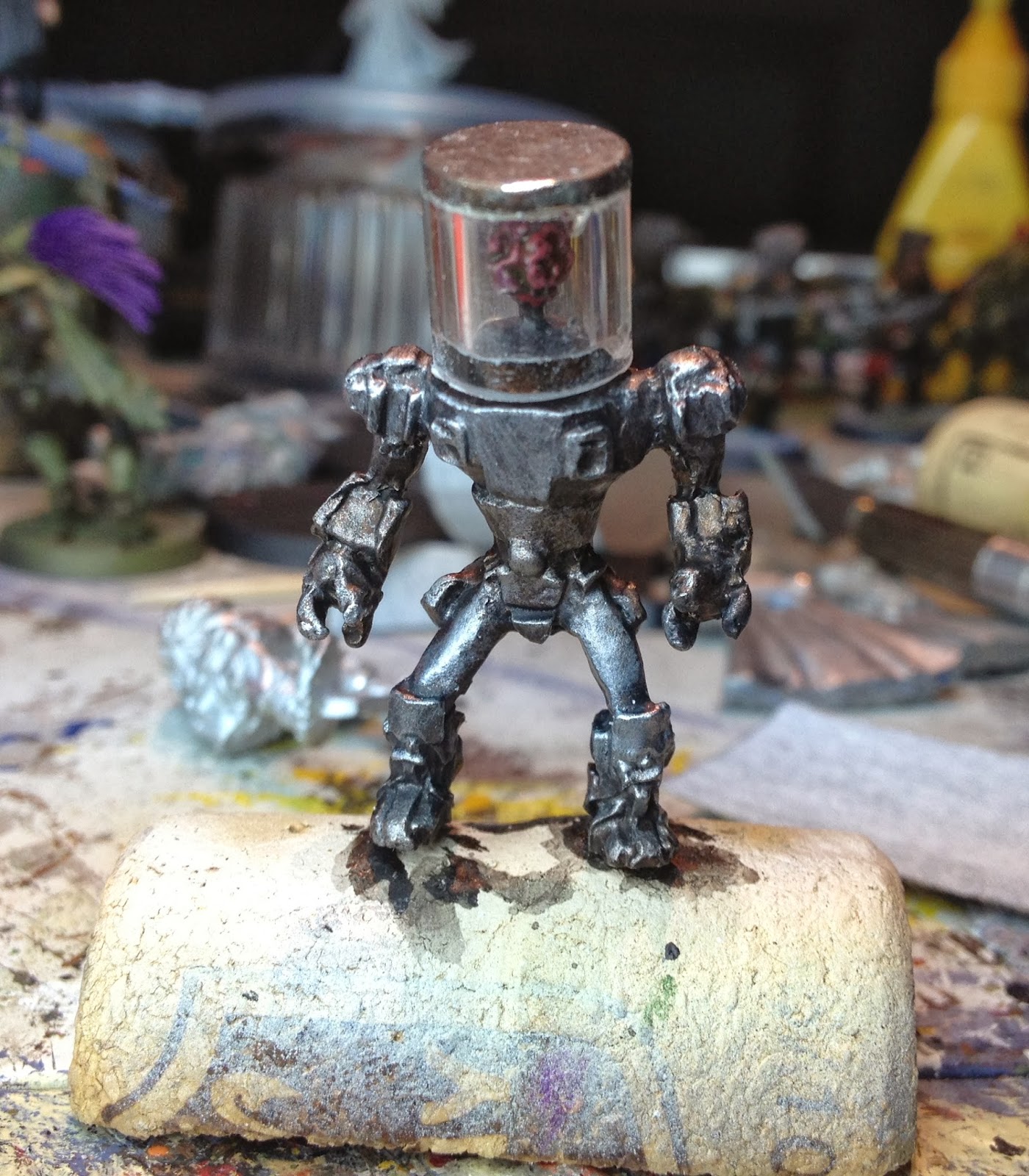 Finally, here is the diorama being presented to the man himself, with the VHS that started the whole thing off. He was very pleased with it and it sounds like he's planning to take a properly lit close up of it with a macro lens which I will link to when it goes up on Flickr. 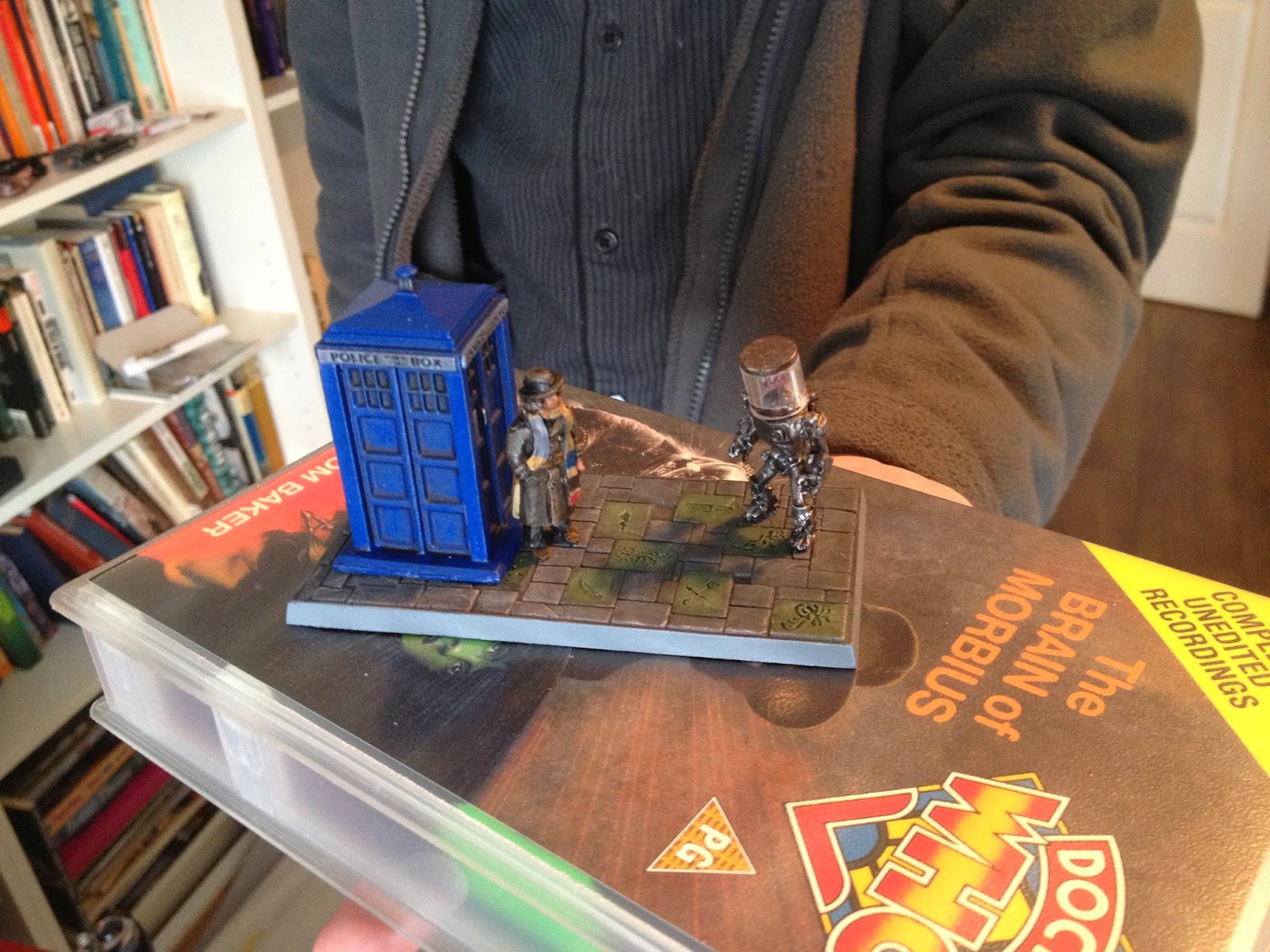 Email ThisBlogThis!Share to TwitterShare to FacebookShare to Pinterest
Labels: non-GW